One of the things about "capital" is that well funded operators are situated to take advantage of downturns.

This shouldn't be a surprise.  Large organizations like banks would rather sell chunks of their portfolio in one fell swoop, to other larger operators, rather than one by one to individuals.

While some companies rehabilitate these properties and eventually sell them off, many do not and a significant tranche of this housing has been shifted to the rental market permanently. 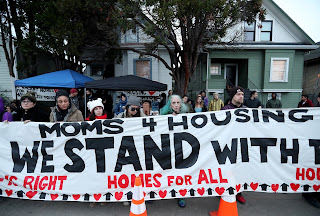 Image from The Intercept article "OAKLAND’S MOMS 4 HOUSING WERE EVICTED BY A GIANT CORPORATION THAT RUNS NATIONAL HOME-FLIPPING OPERATION."

But another phenomenon within the national market for real estate property and financing is the creation of firms that flip single family properties--buy properties, fix them up (either well or badly), and sell them--usually contributing to a resetting of the pricing within the subdistrict.

They've also created a system to enable small real estate investors to invest in properties outside of their local area, both in terms of fixing and selling properties, and also in managing properties, which makes it much easier for out-of-market investors to own such properties ("Startups Reshape Home Investing," Wall Street Journal, 1/8/20).

One such firm is Wedgewood Properties ("Examining Wedgewood: A Look at the Home-Flipping Giant in Battle with Homeless Mothers," NBC San Francisco).

Moms 4 Housing.  In Oakland California the activist group Moms 4 Housing shifted the debate ("When Cops Evicted These Moms, the Housing Conversation Changed," Yes Magazine).  A couple of homeless families decided to squat in a house that had been vacant for many years.  From the article:


The house had sat vacant for several years. Walker and a woman named Sameerah Karim and their children moved into the house in November 2019. The two longtime Oaklanders were homeless and thought it made more sense for them and their families to live there than to leave it empty.

They call themselves Moms 4 Housing. During their occupation, they cleaned up the home. Community members donated furniture. They were later joined in the home by two more Black homeless mothers named Tolani King and Misty Cross.

The occupation was always about more than just putting a roof over their heads. It was also a campaign to call attention to the role housing speculation was playing in Oakland’s gentrification, displacement, and homelessness crisis.

The house on Magnolia Street had been bought for $501,000 in August by Wedgewood Properties, one of Oakland’s most prolific home flippers. The San Francisco Chronicle reported that Wedgewood had rehabbed and sold about 160 homes there in the past nine years.

While they were evicted, attention brought to the case means that they might get to go back to the house, as the city is negotiating with the property owner to sell to the Oakland Community Land Trust, which would then sell or rent the house to the Moms 4 Housing, with an easement on the property maintaining its affordability.  From the article:


In exchange for the lower-than-market sale price, CLT buyers who later move out agree to also sell the home at a below-market rate to income-qualified buyers. The owners are able to build some wealth off their home’s equity, but less than they likely would if they’d been able to buy a market-price home. Even with less equity, CLT supporters say, the model still gives lower-income residents access to stable housing and wealth generation they likely wouldn’t have otherwise in a high-cost market such as the Bay Area. 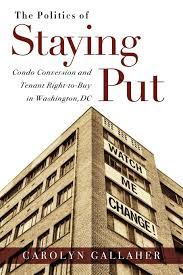 AU Professor Carolyn Gallaher authored a book, The Politics of Staying Put: Condo Conversion and Tenant Right-to-Buy in Washington, DC, on the DC Act. (Interview with the author in Washingtonian Magazine.)

Tenant right to purchase on sale clause legislation being considered.  Like how DC has a Tenant Opportunity to Purchase Act (TOPA) act to give tenants the right of first refusal to buy a property when its sold, Oakland and other Bay Area communities are now considering passage of similar laws ("Moms 4 Housing-inspired policy could shake up Oakland real estate market," San Jose Mercury News).

Although more recently DC changed the TOPA law, so it no longer pertains to single family dwellings, only multiunit properties.

DC isn't a place where private equity has assembled a large portfolio of single family housing.  In places where that is the case, TOPA-type laws should not except single family housing from the mix, although individually owned properties probably should be exempt, unless a tenant has lived there "for a long time".

I'd agree with your point about DC not having a not a corporations coming in to do single family rental housing --but looking at Wedgewood it doesn't look that like that.

Instead it looks exactly what you see in DC -- a very loose corporate structure that buys houses and "Flips" them. The difference here is there is some development work done and often turned into multiunit as well.

Well, in DC the process is still run more on a local basis. The properties will likely be expanded where it is legal, because that's the only way you can make a decent profit given the initial cost for buying the property these days.

... and that isn't terrible, given the demand for housing vs. the "overhousing" issue of two people living in a rowhouse that can accommodate many more.

(Here we live in a ranch. We live in the basement. But each floor is 1400 s.f. It's not so bad. Good light. I wanted to live in the core, but we couldn't find a place that could accommodate 4 adults without having to do some serious renovation. Usually the ground floor was decent or awesome--great for her parents, but the upstairs or basement wasn't adequate for us.

But think of all the houses like this with two adults. Demographically, household size is decreasing in Utah as Mormon families have fewer children and/or move out of higher cost areas--speaking of Phoenix.)

But like my piece the other day, other than adding an ADU, which isn't cost effective yet for a flipper, there is no way to add units to existing houses/lots ("flats") given the current zoning laws in R1 and R2 zones in the way that you can in rowhouse districts.

====
As you know, tons of bottom feeders here and there in DC. But a handful of pretty good operators too, at least these days, operating in my area.

... there was a house, big, farmhouse, four square on a double lot. It got fixed up and sold. But they shoehorned a new big modern house on the second lot. Those opportunities are rare.)