Obviously, the boundaries of national borders present interesting issues because at the local scale, the areas may be more connected than separated, especially if there are not natural boundaries like wide rivers (e.g., the Detroit River and lakes disconnect Canada from Michigan, because you have to cross by a bridge, tunnel or boat). 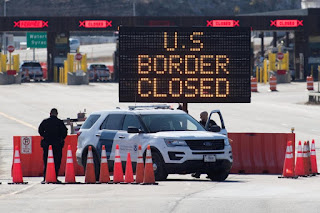 Customs officers stand beside a sign saying that the border is closed at the U.S.-Canadian border in Lansdowne, Ontario, on March 22. LARS HAGBERG/AFP VIA GETTY IMAGES.

The borders of both Canada and Mexico present issues in general, which wax and wane depending on the political tenor in the respective countries.

The current US government's hyper focus on limiting immigration has exacerbated trade and other issues between the nations ("In Canada, Patience Wearing Thin Over Trump’s Antics," Foreign Policy).

In earlier times, things could be simpler. For example, at one time the streetcar line in El Paso, Texas provided service into Juárez, Mexico across the international border ("Story behind end of international streetcars in El Paso, Juárez," El Paso Times).

The service may have continued had the Mayor of El Paso been more forward thinking, especially considering the present reality that "the two cities form the world’s largest binational metroplex, with billions of dollars in trade and thousands of daily crossings by foot, car, and bus."

More recently but before the Trump Administration, a pedestrian bridge called the Cross Border Xpress was constructed providing access from the US side of the border to the Tijuana International Airport.

Earlier this year, Luxembourg instituted free public transit, even across national borders, as a transportation demand management initiative ("Luxembourg makes all public transport free," CNN). But that's a lot easier to do in Continental Europe because within the EU normally there aren't border checks, unlike between the US, Canada, and Mexico.

1.  Sewage from Tijuana.  I've written in the past about how improperly discharged sewage from Tijuana fowls beaches in San Diego County and management of embassies as properties in a local city such as Washington, DC ("International entities that affect communities: embassies; sewage," 2017). 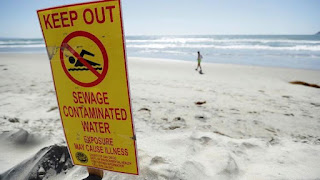 WRT the problem on the Pacific Ocean beaches in San Diego County, the minimally funded International Boundary and Water Commission doesn't have enough money to address the problem, especially as the maximum allowable grant is $5 million.

Interestingly, it's still not enough to address all the needs. I don't understand the failure to get enough money to fix it more completely the first time, rather than to hope for more money, somehow, later.

The San Diego Union Tribune Editorial Board is angry for another reason, indifference ("Editorial: $300 million for repairs is great, but San Diego sewage fiasco still stinks"). From the article:


For the past decade, county beaches have been fouled by Tijuana sewage spills more than 130 days a year on average. Yet the Trump and Obama administrations thought that instead of using a relative sliver of federal funding to address this crisis, inaction was OK. In 2016, Obama’s last year, the federal budget was $3.8 trillion. With the spending of an tiny fraction more than that — an increase of 0.00008% — this nightmare could have been addressed then. ...

Nevertheless, it remains perverse that the only reason that California lawmakers were able to win this funding and recognition was the Trump administration’s eagerness to round up votes to enact the United States-Mexico-Canada Agreement on trade.

2. Cross-border workers and the pandemic. There is a great deal of cross-border commerce between Tijuana, the Mexican State of Baja California, and San Diego County and Southern California more generally, including the daily crossing of the border by tens of thousands of workers. This is in both directions, although more people come from Mexico, although many of these border crossers are US citizens living in Baja California.

Failures to adequately address the coronavirus in Mexico ("Tijuana’s Already Strained Hospitals Face Shortages As Pandemic Takes Hold," KPBS-TV) have affected San Diego County.  So the Mayor of San Diego is coordinating a regional effort and the provision of extranormal assistance to Tijuana ("San Diego and Tijuana form working group to tackle cross-border coronavirus surge," SDUT). From the article:


A spokesperson for the San Diego mayor’s office said the bi-national group will likely include daily data reports and involve a multi-agency response plan that includes the U.S. Centers for Disease Control and Prevention, the Department of Homeland Security, the Federal Emergency Management Agency, police and fire agencies from San Diego and Chula Vista and the California Department of Public Health.

“San Diego and Tijuana’s longstanding binational relationship has (been) and continues to be a strength even amid one of the largest pandemics we’ve faced in a century,” Faulconer said in a statement. “COVID-19 knows no boundaries, so our border region is closely monitoring the impacts to healthcare systems on both sides of the border.” ...

Approximately 265,000 U.S. citizens live in northern Baja California, according to the San Diego mayor’s office. Many of them are essential workers who cross daily into the United States to work in hospitals, senior living homes or for public agencies, for instance.

Elsewhere.  Likely this could be an issue in cities like Brownsville, El Paso, and Laredo in Texas, Nogales, Arizona, and others across the border between the US and Mexico.