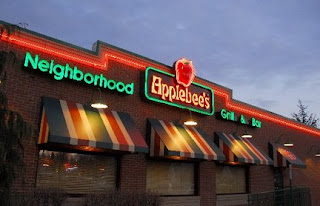 One of the points I have made about the general process of creating a "Comprehensive" or "Master" Plan for a city, town, or county--most states require that localities have and regularly update such a plan--is that the "Economic Development" element of the plan is often incomplete in terms of how it considers what economic development is and the recommendations made in the plan.

I say that such elements are "incomplete" because they often have a somewhat simplistic approach in that they treat any and every economic action as a good thing, without more deeply considering the long term impacts and effects and the multiplier effects of particular economic activities.

The reality is that some economic activities contribute a lot more to local activity than others.  And those are the activities that should be supported and courted, and less effective "economic development" activities should be accorded less support, attention, and priority.

This more nuanced approach I think of as "building a local economy" versus "economic development." And I think such elements within Comp/Master Plans should be renamed and reconceptualized accordingly.

- compared to new construction, restoring a building spends more money on labor (usually locally sourced) and less on materials (which rarely are manufactured locally).  So demolition of properties, depending on their nature, should be discouraged, and restoration encouraged.

- events like an All Star sports game are seen as a local boon, but most of the money spent on hotels leaves the local economy, except for a small portion on labor.  So accommodations planning should be developed to encourage local ownership.

- while incentive payments made to entice firms to locate in a particular jurisdiction are tied to employment goals, they are numerical goals that usually are not tied to residential location, and few of the employees may live in the jurisdiction reducing the overall return from increased property, sales, and income taxes.  So business attraction programs should be devised to focus on the entire package of potential benefits to the city.

- in DC, tax abatements are often provided for properties without provisions for recapture if the business leaves the city (such as the Bureau of National Affairs) or sells the property in a very short time frame (CoStar).

The local economic impact of retail: chains versus locally-owned stores

Another big economic development category is the retail element of commercial real estate.

It's complicated because in states localities compete for sales tax generators, because typically localities split sales tax revenues with the state, so adding retail does increase tax revenues.

On the other hand, as the nature of the retail mix changes, more towards chain establishments and away from locally-owned independent businesses, this has other negative economic impacts that aren't always properly calculated.

The economic consulting firm Civic Economics has done a number of studies on the difference in economic benefits resulting from locally owned businesses versus chain businesses.

One of their most recent studies was done in Salt Lake City, Utah, and the results shows stark differences in the overall gain in economic activity between locally-owned businesses and chains, illustrating the difference between building a local economy and "economic development."  The economic multiplier effect is significantly greater for locally-owned retail vs. chain retail and for locally-owned restaurants versus chains.

(Note that it would be interesting to see if there is an economic multiplier impact difference between locally owned franchised operations, such as Dunkin Donuts or a McDonalds store or a hardware store under the Ace or True Value banner, versus fully chain owned stores like Kohls, Target, Walmart, or Bed, Bath & Beyond versus single or chainlet local operators.)

The differences are so significant that local government campaigns focused on attracting chain retail businesses like Walmart need to be called into question.  Or at the very least, much more detailed economic analysis needs to be performed beforehand to ensure that economic gains are obtained and negative impacts mitigated.

Tax revenue capacity of different types of land use patterns

Another important and more nuanced economic impact analysis technique is to look at the tax revenue generating capacity, along with cost to serve, of various types of land use patterns.  Typically, mixed use development is the most economically successful, from the standpoint of local government revenues and costs. 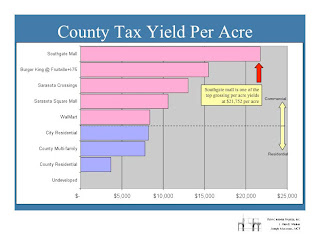 This type of analysis should be incorporated into the zoning approval process, to limit the negative impact of single use projects, which are mostly enabled, not made more difficult, by zoning policies and regulations.

Only by developing more accurate and complete methods for valuating the economic impact of different types of development can local jurisdictions truly protect their interests.

Changing the calculus and philosophy behind how communities produce the "Economic Development" element in Comprehensive-Master Planning processes is the first step.

- "Urban decay and sprawl: one community's gain at the expense of another"
- "Lessons from Walmart's foray into Washington, DC"

I'll have to incorporate your line about confusing economic activity with economic development into future writings on this topic.

A lot of this reminds me about the science and treatment of men's baldness.

We know we have a problem. We, after years of study, know, a bit of science now, and have a few cures (rogaine, transit/walking friendly zoning rules). They work in a majority of cases but are far from foolproof.

There is a lot of science we DON'T know, and the local economy bit is one of them. These studies read a lot like voodoo. I'm not saying the local multiplier isn't real; it just is incredibly hard to measure.

I suspect the real advantage is flexibility. The larger the chain the less flexible they are to deal with changing environments. And we know urban environments can change dramatically in 10 years, rather than the 25 year span of commercial development timelines.

the last chart seems to state that a mall is better, but that runs counter to your argument. Can you explain it? Thanks.

In Sarasota they only make property tax and sales tax. And in Florida I am not sure the rates are that high for property tax at that. Plus the comparative level of density.

In DC, housing also generates income tax and for housing that doesn't have children (which racks up really high expenses for education, $15,000 per child).

PIP did a study on Asheville, which shows much clearly city-appropriate numbers.

I should have included that discussion in the entry.

"I'll have to incorporate your line about confusing economic activity with economic development into future writings on this topic."

Let's hope that you have more success using it than I have. Over at least the last five years I've testified before most of our esteemed Council members in numerous committee hearings and roundtables and provided tangible examples of the problem.

They don't want to hear it and resent having it pointed out publicly since it highlights their incompetence and/or self-interest.

And it isn't just the council/mayor. It's one of the major problems with ANCs and community groups who are easily bought off, especially when public assets are involved.

e.g., I've had the same luck with my testimonies on commercial property tax methods and the impact on neighborhood commercial districts. My line is that people like CM Evans "militantly" refuse to acknowledge the argument.

People do pick up on my points about the city's competitive advantages:

1. historic architecture
2. pedestrian centric urban design (from the walking city era)
3. history, identity, and authenticity
4. transit rich, transit infrastructure that allows for mobility that is not auto-dependent and in many instances is more efficient (but no longer cheaper) than automobility
5. the steady employment engine of the federal govt.

And some people have commented on my point that the city was designed to optimize walking, transit, and biking, not automobility, as particularly insightful.