Is gentrification a racial or economic class issue?

I thought the classic definition of the term is when lower income people are pushed out by higher income people.  This is tricky generally, because it makes the argument in terms of a fixed point in time that cuts out a big part of the story.  In other words, neighborhoods that are seen as low income now were higher income before suburban outmigration and white flight.

But that's not even the issue.  Too often, people use the word "gentrification" when they mean "change," which is a point I made not quite 10 years ago ("One reason why I think the Gentrification word is over- and mis-used"):


when people use the word gentrification, they really mean change. Change is not merely "white or black." It is multi-faceted. And there is no question that it is difficult.

That piece was spurred in part by African-Americans opposing acknowledging and celebrating an influx of Ethiopians into their area of Shaw. 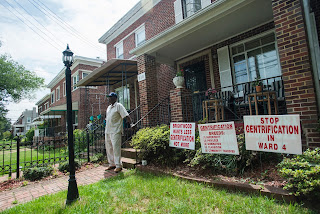 Milfred Ellis views Brightwood as a base for middle class African Americans. Ellis has put signs in his yards opposing the rapid changes. (Amanda Voisard/For the Washington Post)

And that's relevant to the discussion sparked by the Washington Post article, "A D.C. resident hopes these yard signs can save his neighborhood from gentrifiers," which highlights the protest against "gentrification" by an older African-American man living in Brightwood--I guess a few blocks away from me, but I live in Manor Park. 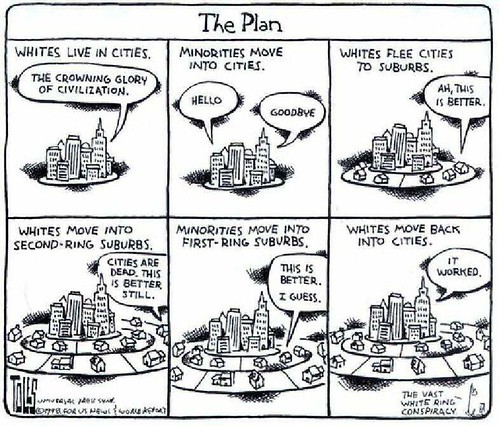 There is no question that the the theory of "ecological succession" is relevant.

This theory, as laid out by the "Chicago School of Sociology" in the 1920s, opined that the wealthy always moved outward, were replaced by strivers, who in turn, as they experienced success, followed the wealthy, and were replaced by a new group of strivers to begin the process anew, while the core was always inhabited by the poorest. 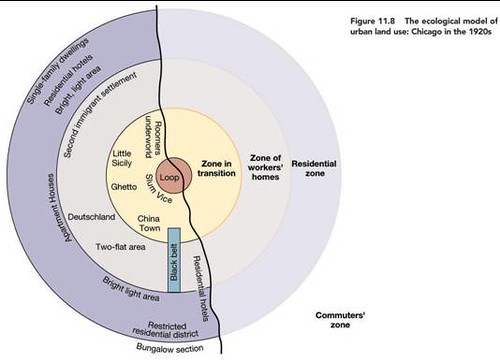 It may well be that this migration path was specific to the US at a certain time, given certain conditions (urban manufacturing, lack of pollution controls, high rates of immigration, etc.), but was not a universal condition.

It has only been since the late 1980s that urban sociology acknowledged to a great extent that there could be inward migration of high income households back to center city.  But that has been a European pattern all along.

I've written quite a bit about how these kinds of migration patterns have impacted and shape the city but it's worth repeating.  Specifically with regard to Ward 4:

1.  Mostly Ward 4 has been "middle class" for the past eight or more decades since it was first developed.  First it was middle class, striving, and upper class whites (the upper classes living in big houses here and there across Upper Northwest, especially in Takoma Park, just over the DC line, where they could take the train to get to their "city jobs").

2.  As the city grew in population in response to the growth of the federal government, especially during the Depression, more government workers and striving blacks moved to the parts of the Ward that segregation allowed.

3.  With suburban outmigration and white flight in the 1950s, the white middle class mostly but not entirely moved out of the Ward.  (For example, it happens that I worked the 2000 Census in the area I ended up living in, and was surprised to come across many houses that had been occupied by white families for decades.  It happens that our house has "always" been occupied by whites since it was built in 1929.)

4.  These households were replaced by middle class households who happened to be African-American.

5.  With aging out and suburban outmigration--especially to Prince George's and Charles County in Maryland, but throughout the metropolitan area--and more recently a return to Southern homesteads ("Why African-Americans are moving back to the South," Christian Science Monitor) on the part of African-American households, houses have been "abandoned" and in turn have been replaced by white, Hispanic, and mixed-race middle class and striving households.

6.  If whites, Hispanics, and mixed race households did not replace the African-American households that left, the Ward would have significantly lost population, especially in the last 10 years.

I don't think that's gentrification, but it is change.

Basically the issue is that younger African-American middle class households generally are not interested in living in many in-city neighborhoods.  I wrote about this in 2006:

- So much of the writing about gentrification is worthless

I can understand the sentiment, if living right in the mix is what's on their mind because here you have to travel a few miles to U Street or Adams-Morgan or H Street for "excitement."

Whatever it is, I think the signs are cool.

my grandparents once owned a house on Peabody street NW and it was a squarely middle class white area right up until the 1960's. The city is changing yet again. This guy with the signs is not young and he's fighting a losing battle. If he owns his house he is going to win big time if he cashes out. It is stupid for him to think that there is no place to go "for black people"- this is not the era of enforced housing covenants- he can sell his house to a young white couple or asian or hispanic couple or whatever and go anywhere he wants- if he leaves for Ward 9 he can buy a McMansion. This is just stupid and pointless. Anyone who actually listens to this kook is full of it themselves.

"Maybe it's because they see it as tired, where their aunts, uncles and grandparents lived."

I can relate to this a little. My mother's family has been in the Brightwood/Petworth area since the 1970's. Growing up and spending time there, I associated it with my grandparents, and other people's grandparents. And most people in our Caribbean family who could afford to move away did: to newer sections of DC (they were still building new townhouses in Fort Totten) or to Maryland and Virginia. I get why people would spend $400,000 for a fixer-upper (!!!) in Brightwood. But I can also see that for many black and immigrant folks who grew up in or spent a lot of time in that neighborhood back in the day wouldn't feel the same.

my charm is someone else's tired...

I think what's happening now is that a lot of the new households have or or planning to have kids. (We are an exception.)

The area is reasonably appealing to people with children who want to live in the city.
Not that such a household type/area excludes African-Americans.

The public schools aren't necessarily great but the area has many good charter schools not too far away, the houses date to the 1920s and 1930s and have "historic charm."

There are some Metro Stations (but not many). Near enough are some commercial-retail amenities. There are parks (Rock Creek Parks, neighborhood parks).

And many of the houses have bigger lots compared to the core (not the rowhouses though, which only have front yards).

Do you require Paper Writing Services Legitimate from a credible and trusted writing company which guarantees Nursing Papers for Sale for the client? Do not allow a complex and challenging task to rack your brain and consume your entire time while the Pre Written Research Paper are conveniently accessible, cost-effective, and confidential with punctual delivery.