One more idea about Detroit: merging not with Wayne County but Oakland County 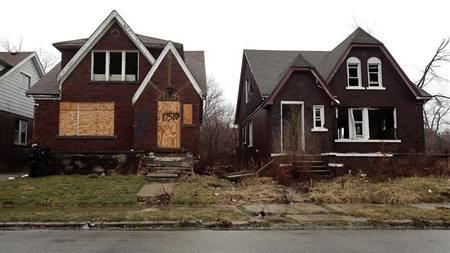 In the 2014 piece, "The rise of Oakland County is built on Detroit's failure," I did discuss city-county merger as one way to change the trajectory for the City of Detroit, which while revitalizing at its core, faces real long term issues concerning lack of market demand for residential living.

I favor city-county merger for legacy cities like Pittsburgh, St. Louis (it will be on the ballot but I haven't written about it yet), Baltimore ("Opinion: What Baltimore and D.C. can do to start working better together as a region (Baltimore Business Journal op-ed)," 2016), and Detroit, as a way to deal with difficult financing and governance issues ("The real lesson from Flint Michigan is about municipal finance," 2016).

But Detroit's decline has significantly impacted Wayne County too, and the County has other issues besides Detroit, aging infrastructure 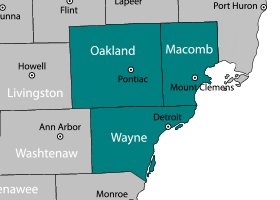 Since the tri-counties haven't grown much, there isn't much chance of Detroit's recapturing the lost 1.2 million residents...

That's why after I wrote the 2014 piece, I realized that instead of merging with Wayne County, Detroit should merge with Oakland County, which is the most economically successful county in the Detroit Metropolitan Area.

That would be an unprecedented kind of merger.

But outside of creating more rigorous metropolitan government structures, along the lines in Greater Portland Oregon and Minneapolis-St. Paul, that's maybe the only kind of quantum scale change that could truly change Detroit's trajectory.

All the great media discussion notwithstanding:

When I did a tour of New Orleans in 2006, after Katrina when the city was devastated, the native tour guide was outraged, and wanted us to be outraged too. I said, "how is this any different from what happened to Detroit?"

Detroit suffers from racism sure (see the writings of Thomas Sugrue) but it was also the auto industry's plan to break the UAW, which mostly has worked, but at the expense of cities in Michigan, especially Detroit and Flint (Pontiac, Lansing, Bay City, and Saginaw too).

So that is why Michigan shifted Republican over the past few decades as auto workers, who tended to vote Democratic (cf. George Wallace, and Reagan Democrats), lost their jobs and left the state.

It's also why I get f*ing tired of reading comments on articles about how Democrats who run cities drive them into the ground.  The issue is far more complicated. 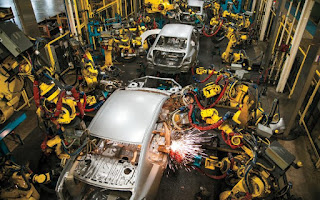 Look at all those robots!  Photo from "10 Auto Industry Jobs that Will Die Due to Automation," MoneyInc.

At the end of the day, locally elected officials have little control over what corporations do and mega economic trends like capital investment, globalization, the replacement of workers with machines, industrial consolidation, etc.

The systems that fund local government were created when the nation was growing rapidly.  We are past that phase now, and in many cases, especially for legacy communities with aging infrastructure and growing pension liabilities, local government funding systems won't generate enough revenue