DC released a cultural plan earlier in the year but while I respect the framework they chose -- moving from "arts as revitalization" to "arts and equity" -- I think it was the wrong approach, because while they discussed problematic conditions in DC's arts ecosystem, they didn't acknowledge the fact that the local arts ecosystem is stunted for a variety of reasons, including the high cost of real estate, and they didn't provide any substantive recommendations for addressing the high cost of real estate and the impact on the arts and culture ecosystem.

And mostly since the release of the plan, the city government has been focused on rearticulating the organization of how it deals with the arts, which has been opposed by various sectors of the arts community, has been mishandled by the city, and seems to be wrongheaded in any event ("DC's arts administration debacle").

By contrast, I've been thinking and writing about this for more than 15 years, initially in response to the failure of DC's "City Museum" in 2003.

In response to the DC cultural plan, I wrote a piece, "What would be a "Transformational Projects Action Plan" for DC's cultural ecosystem" outlining what I think are the primary pieces required to create a robust local arts ecosystem.

Dupont Underground as the most recent example.  This is reiterated by an article in the Washington Post, about the financial problems of the Dupont Underground, an arts space in Dupont Circle created in the no longer used streetcar station which remains extant under the Circle ("Dupont Underground’s future uncertain after it misses $150,000 rent payment").  Also see "Dupont Underground Might Close Next Year, CEO Says,"WAMU/NPR . 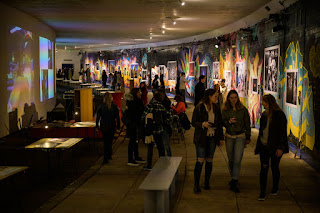 DC Government: A landlord or a promoter of the arts? The city's primary interest in the arts shouldn't be generating rent payments from facilities.

The city should be leveraging the arts for community improvement, quality of life, and yes, economic development.

Besides money, city governments have space/facilities. Facilities are resources that should be leveraged beyond their strict monetary value as rentable spaces.

Dupont Underground being in this position is an illustration of the failure of the DC Cultural Plan to address fundamental issues within the arts ecosystem.

The irony is that this matter is comparable to what motivated me to write this piece, "Cultural resources planning in DC: In the land of the blind, the one-eyed man is king," in 2007 upon the simultaneous financial problems faced by the Lincoln Theatre, Source Theatre, and Heurich Mansion, along with the loss of the Takoma Theatre and the displacement of arts related facilities in the construction of a new baseball stadium.

As I wrote then:

When the same kind of thing keeps happening over and over, it's an indicator that there is a problem with the system of supporting (or not) cultural resources more generally within the City of Washington.

Recommendations from "What would be a "Transformational Projects Action Plan" for DC's cultural ecosystem" relevant to this particular situation include:

10. Create an arts-focused community development corporation to buy, hold, and develop cultural facilities and spaces at the city-wide scale.

13. The city should create a program that provides regular operating support to arts organizations.

15. There should be specific cultural master plan elements specific to artistic disciplines.

16. With sub-plans for neighborhoods/sub-districts of the city.

17. There should be an arts fundraising organization comparable to the Cincinnati ArtsWave organization, or wide-scale property tax funding programs.