St. Louis: what would I recommend for a comprehensive revitalization program? | Part 1: Overview and Theoretical Foundations

I haven't been in St. Louis for 25 years.  Like a lot of midwestern center cities, its heyday is long past.  The Washington Post has a feature on the new mayor, Tishaura Jones ("The first black woman is shaking up the city"), and the comment thread is pretty negative 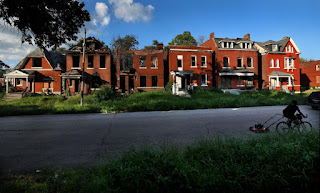 A man pulls a lawnmower down the 3900 block of Labadie Avenue in the Greater Ville neighborhood, passing five vacant homes with overgrown yards on Tuesday, Sept. 4, 2018. This one block stretch contains 14 vacant properties. Photo by Robert Cohen, St. Louis Post-Dispatch.

The city is located at the confluence of the Missouri and Mississippi Rivers, and was an important port especially for north-south trade on the Mississippi, and became an important gateway to the Western US. 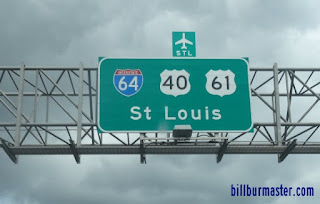 (Like Baltimore) The city is legally separate from St. Louis County (there is an advocacy effort aimed at consolidation, see "5 Takeaways From A City-County Merger Plan That Never Got To Voters," St. Louis Public Radio).

Business consolidation has hurt St. Louis significantly, as major companies like May Department Stores (Macy's), Boatman Bank (Bank of America), Monsanto/GD Searle, and Anheuser-Busch have been acquired by larger companies and the local presence of these firms has significantly diminished. 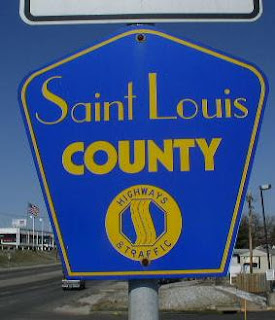 Rollin Stanley was there.  One of the first things I thought of when reading the Post article was a presentation I saw by Rollin Stanley more than 10 years ago.
At the time he was planning director for Montgomery County, Maryland--he had been brought in as a "change agent" with the idea that MoCo as a suburb had to retool for the 21st Century ("Montgomery County Planning Director to speak next Tuesday on County zoning rewrite," 2011).

He was a bit too direct for the suburbs, and left MoCo for a high level planning position in Calgary, Alberta--Rollin is from Canada--and the mayor there is considered one of the most progressive in North America.

Before MoCo, Rollin had been planning director in St. Louis, and the revitalization plan he created there won an international award.  He wouldn't provide a copy, but it happens that an article about the plan is in this document from a symposium, The future of shrinking cities: problems, patterns, and strategies of urban transformations in a global context, starting on page 127 (better formatted pdf version).

Theory of change.  Even in the best of times, politics, governance, and overarching approaches to change don't seem to be particularly congruent.

Elected officials rarely think in terms of systems, let alone theoretical constructs ("It’s time to make ourselves public policy guinea pigs," Washington Post).  They tend to be focused on the here and now, and planning and making decisions for the future seems particularly foreign.

A number of years ago I came across a paper "The Power of Theories of Change," in the Stanford Social Innovation Review that puts forth the concept that substantive and successful change only comes about when grounded in research, evidence, and successful practice.

And it's worse because politicians also don't think in terms of "passing the baton," they want to do their own thing, make their own mark, when successful community improvement is a multi-decade process that to be successful goes far beyond the typical two terms of a big city mayor.  So when new people take over, usually programs pushed by predecessors are junked.  Which makes long term improvement very difficult.

Money is scarce.  It's even more difficult for declining cities because the problems are so challenging and overwhelming and mostly there is a lack of resources to do very much.  Typically, planners and stakeholders are flummoxed by this reality and are mostly focused on maintaining an equilibrium of decline.  Usually, improvement is beyond their mettle.

For example, some of the criticism of Liverpool's recent loss of World Heritage City status referenced Hamburg as a counter-example ("Liverpool has been careless with its heritage," Financial Times).

-- "The real lesson from Flint Michigan is about municipal finance," 2016

But Hamburg is a German city-state with access to capital and political will far beyond that of a typical center city.  Plus, more importantly, Hamburg is a city that is still an economic powerhouse, while cities like Liverpool and St. Louis have been on the decline for decades. 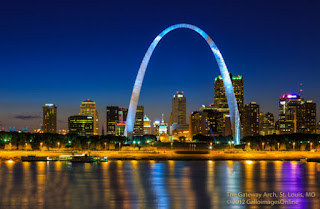 A comprehensive approach to revitalization in a Midwestern center city and St. Louis in particular.  Yes there are the equity and race issues, structural poverty, structural racism, etc.  So what would a revitalization program be?

While there is a big debate in economic development -- do you invest in people or place? -- the reality is that cities are geographically bounded and by definition must invest in place.

At the same time, the approaches need to focus on the development and creation of talent, improving what exists locally while also attracting people from elsewhere.

A comprehensive program for a weak market legacy center city would be the kind of program I outlined (but did not detail) for DC's East of the River and the Takoma Langley district of Montgomery and Prince George's Counties ("Equity planning: an update," "An outline for integrated equity planning: concepts and programs") or the program I proposed for Silver Spring, Maryland, as a way to leverage the creation of the Purple Line light rail program ("Creating a Silver Spring "Sustainable Mobility District" | Part 1: Setting the stage").

But on a much larger scale, like Bilbao, Pittsburgh, Liverpool, Oklahoma City, Medellin, etc. 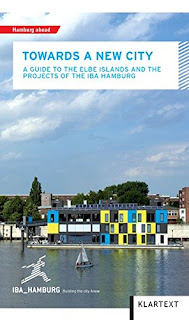 In 2013/2014 I wrote a series of articles on revitalization in the European Union ("REFLECTIONS ON EU IN BALTIMORE AND BLOG").

The story on Hamburg ("HAMBURG, URBAN DESIGN, AND PLACEMAKING: BIG VISION, BIG PROJECTS") referenced IBA and IGF, German revitalization "exhibition programs" that focus on a particular city over a decade a more, with multiple projects big and small, coordinated and integrated.

When I was on the design oversight committee for the proposed "garden bridge" across the Anacostia River, I suggested that IBA and IGF would be great models to further revitalization along in the US.

-- "There has to be a better way to spend $1.85 billion on "revitalization" just to demolish buildings," 2014
-- "The US needs its own version of Germany's International Building Exhibition, let's start with Detroit," 2014
-- "European Garden Festivals as a model urban planning initiative for Detroit and other US cities," 2014
-- "DC has a big "Garden Festival" opportunity in the Anacostia River," 2014

While I've suggested that Detroit and DC's East of the River would be good places to start, St. Louis is just as good an opportunity (except for the money thing).

A caveat on "big planning."  It takes a long time to realize a plan.  For example, the Oklahoma City Metropolitan Area Projects program has been underway for 29 years.  Bilbao a bit longer than Oklahoma City.  Liverpool's slightly more than 20 years.

(I often mention how it took up to 25 years to really see benefits from the WMATA Metrorail system in DC's core (about 20+ years for Arlington's Wilson Boulevard), and another 5-10 years for the effects to be seen in DC's outer city.) 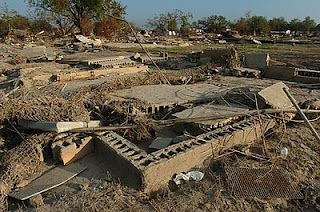 Many homes in the Lower 9th Ward in New Orleans were destroyed in Hurricane Katrina. (Baltimore Sun photo by Kim Hairston). Oct 21, 2005 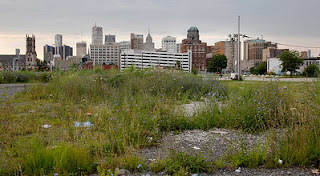 Similarly, Detroit went through a similar planning process in 2012-2014, and Maurice Cox, former mayor of Charlottesville and a professor at UVA, was hired to be the planning director focused on implementation.  But he left for Chicago after four years.

I guess I'd say the issue is that they have great needs, and little money, for example $7.4 million for the Warrendale-Cody neighborhood ("Detroit neighborhood revitalization plan takes shape with youth input," Detroit News).

I think the lesson is that you need a multi-decade commitment to implementation that outspans the temporality of political administrations.

Poverty reduction programs.  Speaking of "people" versus "place" programs, a number of cities have created anti-poverty initiatives.  I'm not sure about the power of "the theory of change" for these initiatives.

Although I am impressed by how United Way of Toronto has repositioned its spending and programming around poverty reduction in particular neighborhoods (Building Strong Neighbourhoods report, Strong Neighbourhoods: A Call to Action), which in turn has shaped the City of Toronto and its funding priorities (TORONTO STRONG NEIGHBOURHOODS STRATEGY 2020).

Another one that didn't have much effect was the creation of a "Deputy Mayor for Greater Economic Opportunity" by DC Mayor Bowser--it was spurred by a conversation I had with her campaign staff in 2013, but instead I had proposed a "Deputy Mayor for East of the River," and a program encompassing both place and people.

1. The overarching approach would be "transformational projects action planning" ("Why can't the "Bilbao Effect" be reproduced? | Bilbao as an example of Transformational Projects Action Planning," 2017), coming up with a set of anchor projects designed to bring community improvement to fruition, implemented through the six element approach to comprehensive revitalization described in past writings.

2.  Undergirded by the general concepts of social urbanism ("The transformation of Medellin into a ‘City for Life:’ insights for healthy cities," Cities and Health, 2019, "Governing inequality in the South through the Barcelona model: ‘social urbanism’ in Medellín, Colombia")

3.  Equity planning, social infrastructure creation ("Palaces for the People: How Social Infrastructure Can Help Fight Inequality, Polarization, and the Decline of Civic Life") and community economic development (I like the book by Mihalio Temali). 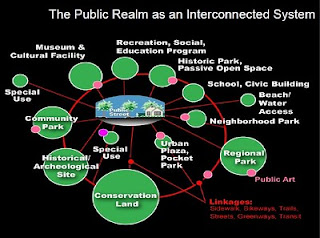 The social urbanism program in Medellin is noteworthy for focused investments in neighborhoods, adding anchors like libraries and parks, as well as significant improvements to the mobility system, especially in areas with challenging topography, and including aerial cable car systems and escalators on steep hills.  Profits from the municipally-owned utility fund many of the improvements ("Utility" infrastructure as an opportunity for co-locating urban design and placemaking improvements").

Another model, located adjacent to schools, not in the same campus or complex, is the Sorenson Multi-Cultural Center in Salt Lake City.  It's a City-County facility, with multiple co-located agencies and programs.

-- "Yes, public and nonprofit investments in the city spur further reinvestment and change: is this a bad thing or a complicated thing?," 2019 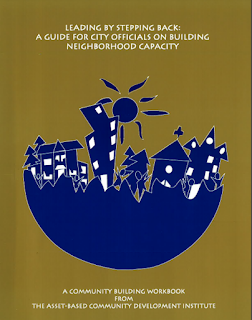 Leading by Stepping Back: A Guide For City Officials on Building Neighborhood Capacity

4.  And a commitment to civic engagement and participatory democracy.  The idea would be to engage citizens in the process as much as they would like to be, in planning, oversight, creation of programs in their neighborhoods, etc.