When I was briefly involved in the now scuttled Anacostia River Trust, I suggested that the group should advocate for a "Rivers and Waterfronts" element in the update to DC's Comprehensive Plan.  The Office of Planning wasn't favorable.

Although a year later, they proposed a Waterfront Commission ("DC puts forward legislation to create Waterways Commission and Authority," ), something I'd been suggesting since 2006.

I also suggested the organization should encourage Advisory Neighborhood Commissions in the communities abutting the Anacostia River to create a "River and Watershed Committee" to better address neighborhood environment issues arising from that proximity.

There are other efforts, like the Anacostia River and Potomac River Riverkeepers, the Alice Ferguson Foundation and its cleanup efforts, the Anacostia Watershed Society etc.

And before that I advocated for more comprehensive planning initiatives along the river:

Some waterfront revitalization efforts I've come across over the years include:

Providence.  Reading a blog entry, "Save a Providence water view," in Architecture Here and Now, the writer, retired now from the Providence Journal, comments that planners and advocates could have done a better job in advocating for better projects along the waterfront.  From the article:

I feel sorry for people who have recently moved into the Benefit Street neighborhood. Perhaps they thought that this city, whose past is so clearly a model upon which to build its future, might adopt development policies that would protect and extend its built heritage. Not to mention residents with even longer tenure in the neighborhood. How could they imagine, after the excellent River Relocation Project of 1990-1996 that created a new, beautiful, traditional downtown waterfront, that the city would instead imitate most American cities, knuckling under to the profane demand, among “professionals,” for architecture that rejects the past and condemns us all to a purposely ugly future.

As the only architecture critic in Providence, and one of the few (if any) around the nation, who tries to follow and review vital projects through their stages of development from a classical design viewpoint, I share blame – for not nagging and blasting the city’s various design commissions (the so-called “experts”) with sufficiently harrowing curses.

I commented that cities like Baltimore and Cleveland (and in DC the federal interest is quality design is represented by the Committee of Fine Arts) have special urban design review processes for areas of special interest, usually downtown areas, and of course, historic preservation districts.

I guess it's in response to a competition to build a development on the waterfront ("'Massive and intrusive': Providence locals double down on waterfront apartment criticism," Providence Journal).  Oddly, the article is readable in my phone newsfeed but not on the computer.  Reading the article and others linked within demonstrate the importance of a waterfront "preservation and development" district calling for extranormal design review.

Interestingly, because the parcel is part of the I-195 Redevelopment District Commission's purview, it's exempt from review by the city.  They say they will provide opportunity for review, but it isn't mandated. 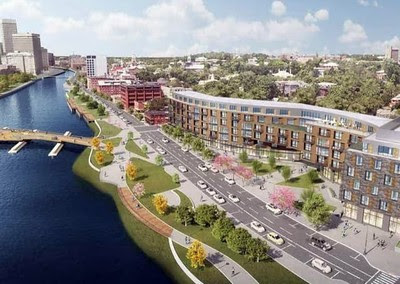 As I say about this more generally, without remedies -- provisions within law calling for review processes -- you can't do s*** ("Without remedies there's nothing you can do: historic preservation in Chicago and DC," 2014, "To be successful, local neighborhood stabilization programs need a packaged set of robust remedies: Part 2," 2020).

River corridors and waterfronts need to be special planning review districts too.

Philadelphia.  There are a couple of recent articles relevant to this.  This one on Fishtown makes the point that developments are being approved that are in areas that will be affected by rising water levels resulting from climate change ("Climate change should be a consideration in planning massive Fishtown housing developments," Philadelphia Inquirer).  From the article:

But along Philadelphia’s riverfronts, buildings are going up in areas that we know are going to flood. More than 600 new apartments are coming to the Navy Yard. New buildings will be constructed on the former PES refinery site in South Philly. And on the Delaware River in Fishtown, development is also being pushed through. I’m not a NIMBY, but a NIMBIIR: Not In My Backyard If It’s Riverfront.

Last summer, Philadelphia’s director of the Office of Sustainability, Christine Knapp, acknowledged the problem with unregulated, “piecemeal” development along our riverfronts in a Philadelphia Neighborhood Networks Zoom: “We need to have standards across the board that any new developments, that any new investments are made with the right science in mind,” Knapp said.

She continued: “When we let people build on the riverfront, it makes it worse for everyone else. But the city is also taking on the problem of what happens when that property floods and the city has to rescue folks, or the city has to be responsible for the response to that storm or that flood. It’s like a triple-edged problem. We absolutely need to get ahead of it.”

An interesting and relevant program is being developed in Philadelphia ("William Penn Foundation is giving $1.65 million to create a new Delaware River Climate Corps," Philadelphia Inquirer).  Training programs for watershed stewards, like by the Anacostia Watershed Society, and Riverkeeper advocacy programs have similar elements.

Further, a number of the city's rivers are deemed "impaired."

Pennsylvania.  Another Inquirer article, "Nearly 2,400 more miles of Pennsylvania’s streams are impaired now compared to just two years ago; Philly has the highest percentage," makes me think that as part of a 21st Century New Deal, dealing with rivers and water quality should be a priority and could be a way to better connect Democrats to rural-relevant issues and voters.  Of 85,000 miles of rivers, 28,000 miles are impaired.

Especially because rivers are the primary water source for most communities, the impact of climate change especially drought, etc.

DC.  There's a Post op-ed, "Everyone should be able to swim in the Potomac."  And DCist reports that five spots on the Potomac and Anacostia Rivers and the Washington Channel are already clean enough to swim in ("Water Quality Data Show Where Swimming Beaches Could Be On D.C. Rivers"). 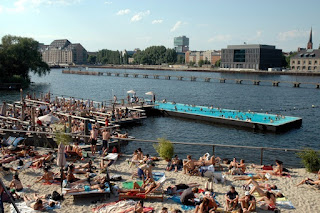 Again, when I did the ART stuff, I wrote a memo about how even though most of the Anacostia Riverfront in DC north of the 11th Street Bridge is controlled by the federal government, DC has the lease of the RFK Stadium and "campus" and there is a stretch of waterfront there that could be "converted to a beach" as a way to give people an opportunity to "touch" the river.

This would increase interest and the ability to mobilize citizens to change the dynamic within federal control ("Engaging citizens in DC's rivers and waterfronts as a way to drive improvements in water quality").  One of my ideas was to have a freshwater pool in the river. 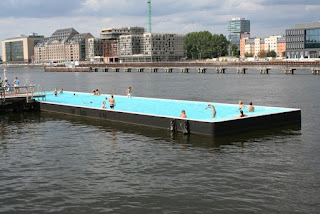 It's obvious that should have happened with the Potomac River a long time ago ("Pools in rivers to promote access and awareness," 2016).

The funny thing is that outside of Georgetown, the east side of the river is pretty much all under the control of NPS.  And NPS rules make it very difficult to have local involvement and activation.

Worse, the Georgetown Waterfront Park, another NPS park, was created in part with land given to NPS by DC, because DC didn't want to take on the responsibility of having a park there.  What a lost opportunity.

Separately, wrt federal control, I argue that Anacostia Park should revert to DC because it is locally serving ("Defining National Park Service installations in DC as locally or nationally serving") and that maybe golf course isn't the best use for the Langston Golf Course ("DC, parks planning, and golf," "Golf, parks planning, and too many courses").

Maybe as part of improving access to Roosevelt Island ("Revisiting: Access to Theodore Roosevelt Island, a national park in Washington, DC") a pool could be created in the Potomac too.

Music barge/Cinema.  Another activation device is concerts on the river ("Music barge designed by Louis Kahn could anchor in Philadelphia as a concert stage," Philadelphia Inquirer).  We once took in the BargeMusic program in Brooklyn, although it's enclosed. 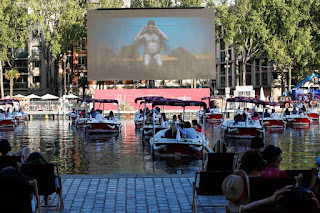 Paris screened movies to people on paddleboats ("Movie magic as Paris turns the Seine into open-air cinema," Reuters).  Chicago too.

Exhuming waterways that run beneath developed areas and restoring their natural flow and width is known as “daylighting.” And in the Northeast, you don’t have to look far to find formerly lost rivers that have been brought back into the light. From Providence to New York to Boston’s Emerald Necklace, these forgotten waters are being surfaced to rejuvenate parks, revive local economies, and create bigger reservoirs that can prevent flooding during increasingly dangerous storms. ...

But for more than a century, putting streams in pipes or covering them with roads was a standard thing for cities to do. To create more paved ground for their expanding urban infrastructure, cities routed inconvenient waterways into culverts and conduits, overlaying the pipes with concrete. ...

It’s not just flora and fauna that can thrive when waterways are uncovered. During the 1990s, Providence daylit the Moshassuck and Woonasquatucket Rivers by removing highway and railroad infrastructure that had covered them for decades. This sparked the construction of Waterplace Park, a lagoon and a cobblestone riverwalk that became the hosting ground for the WaterFire festival led by the artist Barnaby Evans. Since its first river lighting in 1994, WaterFire has brought millions of visitors — and their wallets — to the city’s formerly depressed downtown. In 1997, the architect Friedrich St. Florian, who designed the Providence Place mall, called WaterFire “the crown jewel of the Providence renaissance.”

Daylighting success stories like Providence’s demonstrate why cities such as Detroit, Berkeley, Calif., and Yonkers, N.Y., have daylit lost rivers of their own. In the next few years, New York City will spend more than $130 million to excavate Tibbetts Brook, long buried beneath the Bronx.

This is about the Providence project.

The Providence Journal: What to know about the developer picked to construct an apartment building in Fox Point.
https://www.providencejournal.com/story/news/local/2022/02/03/providence-river-waterfront-apartment-developer-urbanica-picked-ri-residential-development/6648242001/

The Guardian: MPs call for bathing rivers across England as part of anti-pollution drive.
https://www.theguardian.com/environment/2022/jan/13/bathing-rivers-england-pollution-water-quality-mps-report

The Philadelphia Inquirer: Can big ships and little kayaks both use the Delaware in Philly? A battle brews..
https://www.inquirer.com/health/philadelphia-delaware-river-pollution-swimmable-maritime-20220328.html

CNN: The top 10 most endangered rivers in America.
https://www.cnn.com/2022/04/18/us/endangered-rivers-colorado-climate/index.html

The Guardian: ‘The smell is terrible’: toxic foam clouds float through streets of Bogotá suburb.
https://www.theguardian.com/world/2022/apr/28/colombia-toxic-foam-clouds-polluted-river-bogota