I have been meaning to write for some time about the new Wharf District on the Southwest Waterfront, and I am still not doing so.  Of course, my focus is more what it doesn't do -- bad execution of mixed pedestrian spaces, failure to improve the connections to the district from the abutting areas, etc. -- although it has some cool features, may help spark water transportation services, and of course most importantly, adds to the city's appeal as a waterfront city and extends the quality of the built environment.

Waterfront revitalization initiatives.  With maritime commerce switching to containers, most in-city port facilities became obsolete and since the 1980s there have been significant revitalization efforts around the globe focused at reproducing these spaces around tourism and other economic development programs.

This is the case despite the reality of the impact of climate change on waterfronts, many cities continue to invest significant resources into the improvement of their waterfronts. 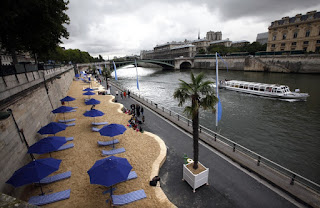 Ironically, Baltimore's Inner Harbor revitalization program sparked the interest of cities around the globe ("Inner Harbor Story," Urban Land Magazine), although I think an important lesson that is frequently missed is that when such a place is touristified with many retail and entertainment assets that aren't particularly rooted in the history and identy of the area, the place needs to be frequently "refreshed" to remain relevant. 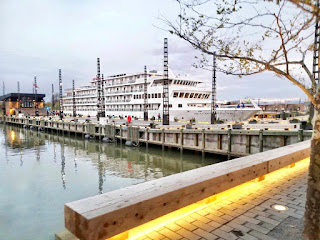 Photo of the American Constitution docked at The Wharf from The Wharf twitter feed.

DC as a river cruise port. One of the positive elements is that now DC is deemed worthy of visiting by river cruise ships.  A Viking River Cruise ship stopped at the Wharf a couple weeks ago ("The Wharf has opened the door to something D.C. hasn't seen in decades: cruise ships," Washington Business Journal).

DC being worthy of visiting by cruise ships as an element of its waterfront is something I used to write about from time to time 10-12 years ago.

No port authority in DC.  One of the points I made is that DC doesn't have a "port authority" and that other "river communities" promote cruise tourism.  A couple years later I did a commercial district revitalization framework plan for Brunswick, Georgia, which is a visiting stop for river cruising on the Intra-coastal Waterway.

Of course, decades ago steamships used to provide connections between cities on the Chesapeake Bay, Potomac River and the Mid-Atlantic, basically from DC to Norfolk to New York City.

Anacostia River.  Besides the Navy Yard and Wharf developments, and now the development at Buzzards Point where the soccer stadium will soon open, the Federal City Council created the Anacostia River Conservancy, although it has had trouble developing currency.

Various organizations such as the Anacostia Watershed Society, Anacostia Riverkeeper, and the Earth Conservation Corps have focused on improving the water quality of the river.  One of the problems is that much of the Anacostia River's watershed is in Montgomery and Prince George's Counties.

The 11th Street Bridge Park project aims to build a park across the river, on the abutments of the previous bridge.

Unfortunately, the reconstructed South Capitol Street Bridge will be shorter than the current bridge, meaning that large ships will no longer be able to traverse the river to the Navy Yard.  The river is deep enough for larger ships up to about the 11th Street Bridge.  East of that point the river isn't particularly deep.

Anacostia Watershed Society runs river boat tours out of the Bladensburg Waterfront Park and docks at the Navy Yard.

Although you can argue that the various plans for the Anacostia River and the Washington Channel (where The Wharf district is) do a goodly amount of that.  The model would have been the Urban River Visions plans created in the early part of the last decade in Massachusetts.

That being said, there are plenty of gaps in the planning:

It should include "canals," specifically the C&O Canal in Georgetown, for which there is a separate improvement initiative.

One of the big problems of DC's waterfront is that much of it is controlled by the National Park Service.

You'd think having much of the waterfront be park is a good thing.  I suppose it is.

But at the same time, NPS can never be expected to run DC waterfront parks in a nuanced manner, balancing park aspects with access and commerce, say like riverfront planning and development organizations do in other communities, or how the City of Chicago manages and operates spaces along the Chicago River.  Federal rules mostly preclude creativity.

I'd argue that at least with the parks along the Anacostia River, that they should be ceded to DC, because there is really no "national interest" justifying NPS control of the parks, other than that they are remnants of the city being controlled by the federal government.

RFK campus replanning: how about a beach park?  I wrote a memo for the ARC, suggesting that a "beach park" could be developed as part of the replanning initiative there, as it is one of the few places along the river that DC instrumentalities control, as a model of how to be way more accessible and engaging.  Surprisingly, the RFK campus plan doesn't acknowledge the opportunity of its waterfront very much.  Probably this is because much of it is wetlands and therefore undevelopable.  But a section of the riverfront isn't wetlands and it's an area of the river that is safer, less rough.

Baltimore Waterfront Partnership as a management model.  Perhaps more than a port authority like Boston's MassPort, which also runs airports and other infrastructure ("Book review: Massport at 60," Commonwealth Magazine), I think a better model for managing the city's rivers and waterfronts would be the creation of a kind of business improvement district, like Baltimore's Waterfront Partnership, but with resident membership aspects comparable to the Anacostia Watershed Society.

Heritage Parks and Areas.  I suppose another model for managing the assets along the river would be a heritage park or area.  The state heritage area, Thames River Heritage Park in Connecticut provides connections across the river, including a seasonal water taxi service, and links between state and federal and commercial assets.

The National Park Service has "heritage areas," including an earlier example along the Mississippi River in the Minneapolis-St. Paul area, the
Mississippi National River and Recreation Areabut I don't think it's fully relevant to DC, as the problem isn't that there are parks on the rivers, and yes a problem exists in terms of coordination of different entities, but more importantly the problem is that these parks are controlled by the federal government and managed under extremely cumbersome rules that make it difficult to activate them in ways that are in concert with current best practices in patron engagement.

The Trust for Public Land and the American Planning Association also have urban parks programs.

The Anacostia Riverkeeper group has offered to take a group out on the river for a boat tour and I was thinking it could be organized as a reader event.  There would be room for 15-20 people.

ah, but would you go?

story on plans for the Mississippi River waterfront in Minneapolis.

The Chicago River redevelopment was a winner in the 2017 round for the Rudy Bruner Award.