Homelessness irrespective of the pandemic

I received an interesting press release (reprinted below) today from a new organization called Time4Homes. Looking up the keyword "homelessness," I haven't written about the issue in more than a year.

I'm not sure I have much new to say about it, other than reiterating one of my ideas of creating social enterprises to provide supportive employment ("One potential solution to the problem of "finding work" for homeless adults," 2017).

Homelessness has been a big issue in Salt Lake County.

At one point, five to ten years ago, Utah was touted as having "solved homelessness" by building housing for that population ("Utah Reduced Chronic Homelessness By 91 Percent; Here's How," NPR).

But in the vein of my point that homelessness as an issue "is a river not a lake," it didn't solve the problem, because homelessness isn't a matter of providing housing to a fixed population.  The population of homeless waxes and wanes, but definitely doesn't disappear ("Once a national model, Utah struggles with homelessness," Reuters).  There are always new people suffering the onset of the kinds of economic, social, and health issues that lead to homelessness.

Homeless shelters were concentrated in Salt Lake City on the edge of Downtown and became particularly problematic, so the State stepped in to coordinate a response ("How Salt Lake City upended the system to use police and shelters to fight homelessness," Los Angeles Times) called Operation Rio Grande, since the shelters were concentrated in the area of the old Rio Grande Railroad Station. 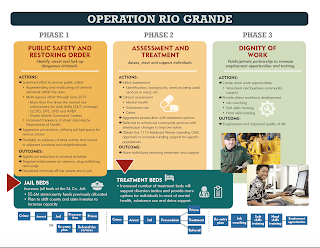 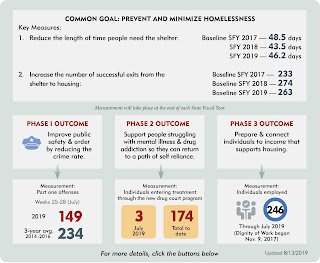 Not that the ACLU of Utah was happy with the program (Endgame for Operation Rio Grande, report).

One was to move to a distributed set up of three smaller shelters instead of one big one.

But in creating three smaller shelters to replace one larger one, they made the total number of beds less than what had been provided previously, and of course, almost immediately, ran out of space ("Salt Lake City's new resource center for homeless women is already full and overflowing," Salt Lake Tribune; "Homeless community claims resource centers are at capacity," ABC-TV).

They justified the decision to downsize in terms of "solving the problem, therefore reducing demand" but that was ill-advised given the bed reduction came before the increase in programming. Let alone the point I make, that new homeless cohorts are always being created.

Separately, Salt Lake City created a temporary shelter for the winter ("Utah is giving homeless services $19 million to focus on emergency shelter," SLT) and other organizations stepped in the breach as well.

The new, often farther out shelter locations can be less accessible and aren't in locations where people expect pedestrians making them unsafe ("Fatal crashes near South Salt Lake homeless center spark calls for pedestrian improvements," SLT) and harder for people to receive other services.

(I made a similar complaint about DC's decision to distribute homeless shelters for families around the city.

While it is positioned as a kind of equity--not concentrating the problem, typically in poorer areas, making sure the wealthier districts of the city also contribute--the reality is that centralized shelters tend to be better located and more efficient for clients in terms of access to transit and services.)

To some extent, it is an issue in state politics still, on whether or not the State should have a position of "homeless czar" to coordinate management and response (">Leading Utah gubernatorial candidates want a 'homeless czar," SLT).

I think there should be, because homelessness (and poverty) transcend jurisdictions and should be addressed at the scale of a metropolitan area. Utah is ahead of other places--granted it's a small place, with population concentrated in a relatively small area--where the State government is taking a leading role in addressing the problem, even if sometimes it does so begrudgingly.


ALBANY, NEW YORK, MAY 14, 2020—Time4Homes, Inc. has launched with its offices in the Capital District and is seeking volunteers from around the nation to help its efforts to end homelessness.

Adequate shelter is a human right and with more than half a million homeless people across the nation and a large percentage of those in New York, we have a duty to band together to solve this issue. Time For Homes advocates for a housing-first philosophy to end chronic homelessness in New York State by 2025. Time For Homes does this by working with a four-pronged approach:
Time For Homes is focused on solving this crisis in New York State to use it as a model to roll out nationally.

“We have the wherewithal to eradicate homelessness entirely—our tested solution will be proven in New York State and then can be rolled out nationwide. In five years we’ll see an entirely different landscape in New York. By 2035, we can end homelessness nationwide.”

In order to achieve its vision, Time For Homes believes in a methodical, rigorous approach. As such we have a Data for Good program that captures a variety of data from both government sources and other nonprofit organizations in order to drive change in the most efficient manner possible.

Time For Homes recognizes that it is exponentially more difficult to improve a program if we aren’t able to measure its success. We operate under a theory of change that allows us to constantly evaluate our operations, with perpetual feedback loops that are built-in at each stage and level of our projects.

“Through harnessing the abundant data that exists, rigorously analyzing it, and sharing it with our partners, we are able to drive informed societal change.”

Time For Homes needs individuals who want to drive societal change and build their legacy. Interested people should visit the Time For Homes website at Time4Homes.org and click "What You Can Do" to get involved.