Independent Lens is one of the documentary programs on PBS, like American Experience.  Programs also repeat on the PBS World channel, which many PBS stations broadcast on one of their additional digital channels (if they haven't sold them off, like Howard University did with WHUT).  Sadly, neither WETA in Virginia nor Maryland Public Television carry PBS World.

"Represent" follows three women running for political office in the Midwest.  It's an important program because it demonstrates that politics is more than national government--the House, Senate, and President in Washington.

The original broadcast was Monday night, but it is rebroadcast throughout the week on some PBS Stations, as well as PBS World, and it is also available online.

Bryn Bird ran as a Democrat for Trustee on the township board in Granville, Ohio.  Myya Jones ran for Mayor of Detroit at the age of 22, in 2017 while she was still a student at Michigan State University.  Korean-American Julie Cho ran for Illinois House of Representatives as a conservative Republican in a district in Evanston, which borders Chicago, is in heavily Democratic Cook County, and is the home of Northwestern University. 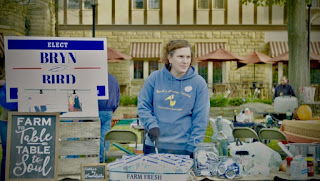 Bryn Bird is seen in this production still from the new documentary campaigning at a community event in front of the Granville Inn.
Bryn Bird, who got a graduate degree in public policy at GWU, worked in politics for a number of years on farming issues, but went back to work on her family farm, won ("PBS to air documentary on female politicians featuring Granville's Bryn Bird," Newark Advocate).  The others did not.
Jones was not on the ballot, because she hadn't been registered to vote in Detroit, and she continued her campaign as a write in ("Myya Jones, Detroit's millennial mayoral candidate, now running as a write-in," Metro Times).  The top two candidates, the incumbent Mike Duggan, and Coleman Young II, son of the former mayor, garnered 94% of the vote.

Julie Cho has since created a nonprofit called Fairer America, focused on supporting minorities with conservative views, and she continues doing health care consulting. Myya Jones ran for Michigan House of Representatives the next year and lost as well.  Now she works for Google.

The documentary focuses on their campaigns, but since Bird won, also shows some of the meetings and activities she's been involved in since taking position as Trustee.

You'd maybe think that pedestrian issues wouldn't be an issue in a rural area, but one of the items she's working on is providing pedestrian access to a local elementary school.  A neighboring farm owner agreed to provide an easement for a walkway to the school, but the process is still underway.

Goes to the issue of Maryland commercializing biotech. a lot of "back office" stuff. Not so dissimilar to what happened with "infotech" in NoVA in the 90s.

And probably more useful to draw in talent from Wilmington/West Chester in drug manufacturing than NIH scientists...

There certainly are a couple here (United Therapeutics, and they have lost their mind), one of my favorite salmon gene plays, and a few other bit players.

But miles and years away from SF, San Diego and Boston.

If you want to look at corporate giveaway, the WI deal for Exact Sciences to move from Boston has been a huge winner.

(reposted due to editing)

Wrt biotechnology in MoCo/Maryland, for whatever reason NIH doesn't have the same spinoff energy as universities.

While academics, at least some of them are seriously motivated to make $, while people who go to NIH aren't similarly motivated.

You had the genomic thing, and that seeded MC somewhat. Even so some of those people went to SD(?). But NIH and FDA and other HHS units don't have the same research heft as those top notch universities, especially a grouping like MIT and Harvard.

Plus, FDA is regulatory more than it is research producing. Although how like MCI first located in DC because it had to do so much challenging in the courts to be able to offer service vis a vis ATT, some pharmaceutical start ups have located in Montgomery County to be closer to FDA.

In Beltsville you also have a USDA experiment station and UMD. But it's not comparable to UC Davis (probably because the ag industry here isn't nearly as significant as California). In a way, UMD Baltimore is the UCSF to Berkeley (for a long time what is UCSF was the SF based medical campus of Berkeley, although later it split off into a separate institution, but still with close ties to UCB).