Financial Times article: "Why the urban poor will be forced to leave big cities"

-- "Why the urban poor will be forced to leave big cities"

Thinking back to previous writings, I realize I've discussed this in two different ways, equity and economics.
Economics.  The economics argument is pretty clear.  Since the 1950s, the reason that the poor congregated in cities is because when city land values declined in the face of suburbanization, the impoverished could afford housing, especially as desperate property owners wanted tenants.  (Before the 1950s, most people lived in cities anyway, so they were a mix of all classes.)
Now that residential choice trends include cities (I won't say "favor" but now cities are seen as equal or superior to suburban location by many segments of the housing market), urban locations are seen as desirable.
In such situations, the poor will be outbid.
I've written this for years, but more in terms of the middle class.
-- "Exogenous market forces impact DC's housing market," 2012
-- "Applying the super-gentrification thesis to San Francisco, Santa Monica, and other cities experiencing hyper-demand," 2014
-- "The nature of high value ("strong") residential real estate markets.," 2017
-- "Why "gentrification" is visible now... the Diffusion of Innovations Curve of Everett Rogers," 2018
As urban neighborhoods become more desirable at the scale of the metropolitan residential choice landscape, prices will go up, and people who had been able to afford to live there will be outbid.  In short, the highest wage earners are driving the market in the "best" neighborhoods, not average wage earners.
Equity.  The counterargument is equity, that all people should be able to live in the city, regardless of income (see the "right to the city" arguments" originally articulated by Henri Lefebvre, and extended by people like David Harvey).
In a market economy for housing, to ensure a place for the economically less well off, that requires public intervention to build, own, and operate housing, as well as other subsidies, such as vouchers for people to pay for private market housing.
Municipal economics and low value housing.  On the other hand, since cities are geographically circumscribed by other municipalities, they can't grow (with the exception of cities like Houston, Oklahoma City, or Charleston, South Carolina, where there are more liberal annexation laws).  Since they can't grow, there is a ceiling on their ability to generate revenue.
Property taxes are the primary revenue source for local jurisdictions ("The real lesson from Flint, Michigan is about municipal finance"), hence the motivation of local political and economic elites to focus on land use intensification, which is the foundation of the "Growth Machine" thesis about the politics of cities ("A superb lesson in DC "growth machine" politics from Loose Lips (Washington City Paper)").
Balancing equity and economics.  Devoting large tracts of land to low revenue generating property is economically problematic.  To me, the best way to balance equity and economics for low income households is a mix of housing types in neighborhoods--from basement and attic units, to carriage houses, and apartment buildings of various types, alongside single family housing.  This allows for a mixing of incomes with a lot less subsidy.
On the other hand, higher income households prefer not to live by low income households.
Pandemic related shocks: more people become relatively poor when it comes to the urban housing market.  Where the change in the makeup of the market is different from past recessions is the outmigration of not the poor, living in subsidized housing, but the more precarious ("precariat") economic segment of the near/lower middle class.  For example, the people working in hospitality, retail, travel and tourism, entertainment.
Simon Kuper, the author of the FT article, distinguishes between the "workplace," "networking," and "playground" functions of the city, and suggests that the well off working from home will still be attracted to urban living, even if they have fewer retail amenities, as they are able to still benefit from agglomeration economies -- what he calls the "networking" or exchange function -- and the cultural and placemaking benefits ("playground").
Renting versus owning.  Kuper makes the point that renters have a short time horizon, 2-3 years, while housing buyers look at a 20-30 year time frame.  Renters leaving the city has a different effect on pricing compared to property owners leaving the city.
Buying, when you have money, is attractive especially because when it comes to rock bottom mortgage interest rates.  Which is why  desirable neighborhoods in many cities haven't seen the same drop in housing prices that is happening in the rental market ("Rent: Where rents are rising and falling the most in big cities," USA Today"). 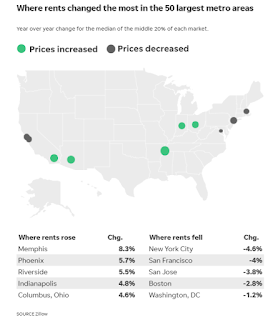 The Information Age: cityspaces as sites for digital production.  I haven't liked past arguments by anti-urban critics like Joel Kotkin ("The Childless City," City Journal) criticizing urban living as more about consumption and entertainment and less about production and the workplace, but that is a more apt criticism going forward if work becomes less centered on going to "the office" ("Reimagining the office and work life after COVID-19," McKinsey).
But in any case, the city becomes an even more pronounced space for nonphysical production of "work."  What Manuel Castells calls "The Information Age," where computing and telecommunications support economic output that is less focused on goods.
Conversion of commercial space to housing.  Kuper suggests that unused office buildings and shops will be converted to housing, allowing the recently graduated to still come to the city and start their careers.  Interestingly, the Post just published an article about the conversion of a hotel in Alexandria to condominiums ("Shuttered hotel gives way to luxury condominiums").
Suburban Districts with urban feel: Cityness Index.  Zillow and Yelp have created a new index they call "Cityness" to measure the level of urban-ness in suburban cities, for people looking for alternatives to hyper urbanity in the face of the pandemic ("Zillow and Yelp Name Top Affordable U.S. Suburbs With a City Feel"). 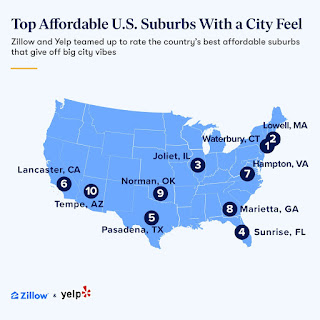 Of course there are also the second tier cities, like Columbus, Omaha or Des Moines, which as Kyle Ezell wrote in the book Get Urban, have a number of walkable neighborhoods anchored by traditional commercial districts -- the kinds of places that aren't Williamsburg in Brooklyn, but cool enough, at least relatively.
The Cityness Index combines data from both Yelp and Zillow:
Yelp
Zillow