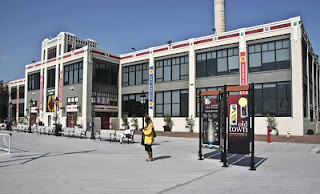 Waterfront side of the Torpedo Factory.  Flickr photo by Kevin Lewis.

As more places become competitive destinations, for example Alexandria now competes with National Harbor in Prince George's County and new destinations, The Wharf and the Navy Yard/Capitol Riverfront on DC's southeast and southwest waterfronts, destination districts likely need to be (constantly) refreshed in terms of the retail mix and attraction offer, especially when it is dominated by food and drink.

In Annapolis, the underpowered City Dock area of the waterfront is going to be rebuilt, the Market building public market has sputtered for decades because of a dearth of customers, and a new proposal for a boutique hotel is a bit taller than allowed by the city's historic preservation guidelines ("Annapolis business owner Harvey Blonder trying to resurrect plans for a hotel at City Dock," Annapolis Capital-Gazette) so it remains to be seen if it will be approved. 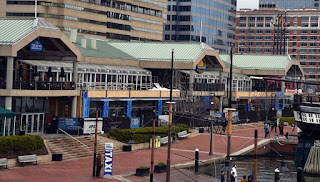 In Baltimore there is hand-wringing over the continued failure of Harborplace on the Inner Harbor, once considered an example of international best practice ("On the Revitalized Waterfront: Creative Milieu for Creative Tourism," Sustainability Journal, 2013) as well as significant business closures at the nearby Power Plant district created by the Cordish Companies.

Harborplace has been in decline for many years ("As businesses close, Baltimore ponders Inner Harbor’s future: ‘The status quo is not going to work’," Baltimore Sun), and the city hasn't invested in expansion of the Convention Center, to help draw larger conventions.

WRT the Inner Harbor, not only has it been impacted by a drop in tourism and visitation resulting from ongoing unrest in response to the death of Freddie Gray in police custody, the reality is that as an ersatz destination built around food and drink with few real authentic elements other than being on the water, it has been tired for a long time, and ownership by an out-of-area real estate firm that has had trouble doing new things or raising capital makes it that much harder to improve.

Both the City Dock hotel proposal and the Torpedo Factory Arts Center raise important issues about "preservation" versus "conservation."  Preservation keeps things the same, while conservation is about sustainable use, and allows for reasonable changes.  I'd argue to remain competitive and/or to regain competitiveness, the opportunity for and in change needs to be on the table. 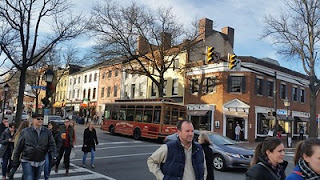 According to the WBJ article, an action plan for the Torpedo Factory Arts Center will be released at the end of October.

This follows the city taking over the building in 2018 ("City takes permanent control of Torpedo Factory," Alexandria Times), and a review in 2019 of previous studies and recommendations conducted by local planning firms (A Study of the Studies: Themes and Recommendations for a Vibrant and Sustainable Torpedo Factory Art Center).

While I am a big advocate for arts and culture as an element of planning, urban design, and placemaking:

that doesn't mean that change is out of the question, that status quo and stasis is preferable. Change needs to start from the standpoint of objective analysis, and that can be very difficult.  Maybe the arts use dominated by artists studios is no longer the right use in terms of broader city goals for visitation, waterfront revitalization, and economic development.

Current conditions.  Alexandria has been a leading tourist destination in the context of visiting Washington, especially because of its proximity to the George Washington Mount Vernon plantation.  King Street is marked by restaurants, retail catering to tourists, some lodging options, and a nice square fronting City Hall. 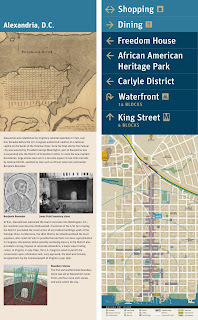 The City has a great destination marketing program (Visit Alexandria) with a visitor center on King Street open into the evening, and an initiative to create more pedestrian space at the foot of King Street.

It's served by the King Street Metrorail station and complementary shuttle bus services.  They have the best wayfinding signage system in the metropolitan area, although it focuses on King Street, and hasn't been extended to the rest of the city.

The city has been a good location for trade associations and other organizations wanting proximity to the Capitol and federal agencies without paying premium rents commanded by a location in DC.

Alexandria has been a planning innovator in terms of supporting the mixing of residential and commercial uses as an adaptive reuse of office buildings.  The core of the city is a historic district and like most places, there has been citizen opposition to land use intensification.

There's a lot going on in Alexandria these days.  First, it has been working on improving its waterfront district for some time, spurred by the face of increased competition from National Harbor in Prince George's County, which has a casino, and revitalized southeast and southwest waterfront districts in DC ("Old Town loosens up: How National Harbor and The Wharf are forcing Alexandria to modernize," WBJ), The Wharf in Southwest and Navy Yard/Capitol Riverfront in Southeast. 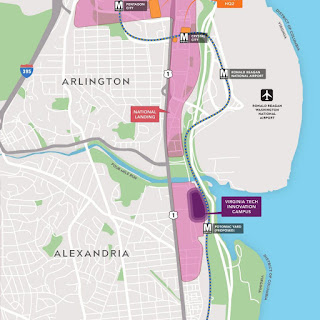 Second, it has benefited from rents in Arlington being higher than typically allowed for in government leases, so Alexandria is attracting new development to the Eisenhower Avenue area, including as a key anchor, the National Science Foundation.
(This happens because Republicans have so bollixed Congress that the General Services Administration isn't willing to seek leases in higher rent locations, which requires Congressional approval.)

Third, Amazon's creation of a second headquarters in the Potomac Yard district spanning both Arlington and Alexandria--now renamed "National Landing"-- is driving significant new demand throughout Alexandria, and fourth, paired with Amazon, Virginia Tech is building a new technology research and education campus on the Alexandria side of National Landing.

And this has moved forward the construction of an infill Metrorail station serving this area.

The Torpedo Factory Arts Center was created in the 1980s, to utilize an otherwise vacant building.  The building is open to the public, with galleries and education facilities, and a small history museum and cafe.  Most of the space is devoted to studios for artists, paying $16/s.f., and the studios are open for sale of the art.  About 500,000 people visit each year.

What to do?  Artists are complaining that as is common, now that the area is in demand, in part through the creation of the arts center, artists will be displaced.  But the planner side of me thinks that's too simplistic.
Planning-wise the city needs to assess its goals for the waterfront, goals for the arts, ownership of the building, functioning of the building, and determine if the current use is the best way to achieve multiple goals.
Underpowered use.  I would argue that dedicating most of the building to studios isn't the best use for a prime location on the waterfront, especially given the relatively small size of the space (compared to larger and "better" facilities like the Belgo gallery building in Montreal and the Bergamot Arts Center in Santa Monica) and the type and range of the art produced there.
(It's unfortunate that the complex couldn't expand to the building next door, which is an office building.  "Boundary Cos. acquires Torpedo Factory office in Alexandria," WBJ.)
A food hall isn't likely to be a successful alternative.  OTOH, I'd argue that a food hall, in an area that is already well-served by restaurants, is hardly a unique use with a great deal of staying power, especially given the failure of similar uses in Annapolis and Baltimore as mentioned above, as well as the South Street Seaport in Manhattan, Faneuil Hall in Boston, etc.
For a food hall to be successful week in and week out, there would need to be much greater visitation, probably in the range of a couple million visitors per year at least, and throughout the year, rather than in the summer and fall.
Strengthening presentation of arts and culture in the core of the city.  At the Torpedo Factory specifically, I'd look at strengthening the arts and culture use around "presentation" rather than arts production because of the nature of the location and the visitation profile, and consider moving the Visit Alexandria visitors center to the Torpedo Factory (although there is something to be said for spreading facilities along the corridor).
I'd also have tried to take over the Old Town Theater as an arts facility (2018 blog entry), and created a more integrated network of arts and culture facilities and events within the King Street corridor, including the historic district as a place to visit, the Athenaeum, the nearby branch library, the weekly farmers market, the Stabler-Leadbeater Apothecary Shop/Museum, etc.
-- Alexandria City Arts and Culture Master Plan (2016)
Maritime history?  An alternative culture use could be a focus on the presentation of maritime history.  A regional example is the Chesapeake Bay Maritime Museum in St. Michaels, Maryland.  There is the Mystic River Seaport, the Merseyside Maritime Museum in Liverpool, and many others. 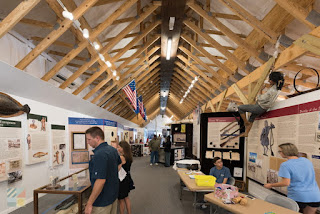 North Carolina Maritime Museum at Southport
The waterfront currently provides water taxi services to the National Harbor and DC, along with cruises to and from Mount Vernon.
Now that DC has lowered the South Capitol Bridge so that large warships can't be stationed at Navy Yard, I wonder if there is an opportunity along those lines along the Alexandria waterfront (not that it's cheap or easy to do this).
Money.  But such a change wouldn't be cheap and would require fundraising and sponsorships in order to bring it about.  Meanwhile real estate firms are likely to be interested in the building.  One source of funding could be a rejiggering of the use of visitor taxes (assessed on lodging, etc.) to also fund related arts and culture uses.
Address artist/studio displacement.  If the city does decide to change the use making artists studios no longer the primary use of the building, the city should commit to finding/providing alternative space for studios, as part of the city's overall arts and culture master planning process.
Granted new space isn't likely to be as well located, but that's a trade off that may have to be made.