-- "Driving While Black: Race, Space, and mobility in America"  From the website:

Chronicling the riveting history and personal experiences – at once liberating and challenging, harrowing and inspiring, deeply revealing and profoundly transforming – of African Americans on the road from the advent of the automobile through the seismic changes of the 1960s and beyond – "Driving While Black" explores the deep background of a recent phrase rooted in realities that have been an indelible part of the African American experience for hundreds of years – told in large part through the stories of the men, women and children who lived through it. 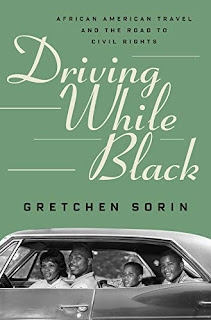 Drawing on a wealth of recent scholarship – and based on and inspired in large part by Gretchen Sorin’s recently published study of the way the automobile and highways transformed African American life across the 20th century (Driving While Black: African American Travel and the Road to Civil Rights (W.W. Norton, 2020)) – the film examines the history of African Americans on the road from the depths of the Depression to the height of the Civil Rights movement and beyond, exploring along the way the deeply embedded dynamics of race, space and mobility in America during one of the most turbulent and transformative periods in American history.

Civil rights history is intertwined with transportation, because services were segregated throughout the South, with occasional exceptions such as in DC.

The Montgomery Bus Boycott, the Freedom Riders, protests we don't know about in the early 1900s (Richmond Streetcar Boycott, 1904) are key elements in the fight for African-American Civil Rights in the United States.  A bus strike over fare raises was a key event in the political ascension of Marion Barry, who became a school board member and then mayor of DC.

"Driving While Black" remains an issue today in terms of racialized social control and policing in urban communities. Many police killings of civilians have involved African-Americans being stopped for infractions that might have been ignored had they been white.  See "Philando Castile killing: Officer charged with manslaughter," CNN; "Photo contradicts key claim made by Tulsa police in unarmed black man's fatal shooting," Denver Post.