I am not able to check out quite yet the finished reconstruction of DC's Central Library, which has been lauded in the Washington Post ("DC's ambitious, stunning new MLK Library," "Six ways to get to know DC's beautifully renovated MLK Library," and "Philip Kennicott: America’s libraries are essential now — and this beautifully renovated one in Washington gives us hope").

But to me, despite the great design, it's a disappointment, because the program--what it actually does--could have been so much more. 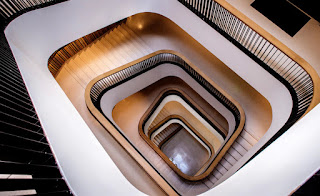 The spiral staircase is cool, but how much does it contribute to culture.  Photo: Bill O'Leary, Washington Post.

One of the problems was to have a design competition without having a plan for the library's program beforehand.  Another was thinking that design could substitute for program.

Although I did come around to the idea that because DC stakeholders often lack vision when it comes to cultural planning, having a great design could generate demand for a great program to complement design.  Of course, that didn't happen here.

Failure to re-envision what the library could be and do has been a significant influence on my thinking about cultural planning, and led to my outlining of what could have been a world class central library with a program second to none. 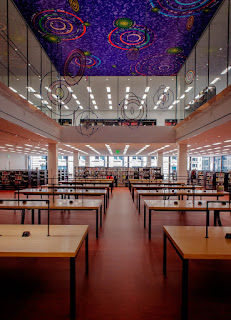 The double-level reading area features mobiles and a mural on the ceiling. (Bill O'Leary/The Washington Post)

Primarily it is lack of vision.

But it's also the fault of the library system not being able to build a completely new library, because the physical limitations of the current building were so significant (albeit what a great location).

This is an example of where historic designation of the building and an unwillingness to start somewhere new, has led to a sub-optimal result. 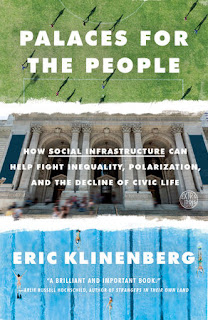 Libraries as social infrastructure is a key point made by Eric Klinenberg in Palaces for the People: How Social Infrastructure Can Help Fight Inequality, Polarization, and the Decline of Civic Life.

The title comes from a statement by Andrew Carnegie about why he funded the construction of libraries.

Co-location of facilities by different agencies. (This is from the 2020 entry on National Libraries Week.)

The Brooklyn Historical Society is merging with the Brooklyn Public Library, in part to provide more space for the library's historical collection, but also to provide more stable funding to the BHS, which has an awesome exhibit program. Ottawa, Canada is about to begin construction of a joint Central Library and Archives with Archives Canada ("Modern concept signals next chapter for Ottawa ‘super library’," Toronto Globe & Mail).

Heretofore, the only two I know about are in Montreal, where the provincial library serves as the central library for the city, and in San Jose, California, the city and San Jose State University built a joint library.

Both of these examples remind me of how the State of Maine has a combined state library, archives, and museum, which I wrote about in 2005 ("Central Library Planning efforts and the City Museum, how about some learning from Augusta, Maine ... and Baltimore?").

I think an Ottawa-like endeavor could solve the problem in Seattle of the Trump Administration's push to close the regional National Archives unit there ("Federal lawsuits filed against three agencies for failing to produce records related to National Archives in Seattle," Northern Kittitas County Tribune; "‘Terrible and disgusting’: Decision to close National Archives at Seattle a blow to tribes, historians in 4 states," Seattle Times).