Last week's insurrection interfered with my writing plans.  Instead I doomscrolled for the rest of the week, reading all sorts of coverage. 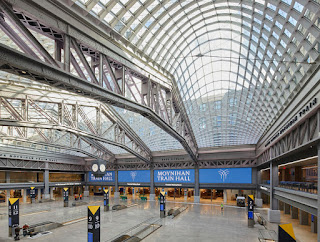 Once the mail sorting room of the 1912 James A. Farley Post Office Building, this vaulted space is now the central highlight of Moynihan Train Hall, which opened at the end of 2020 as a much-needed extension to New York’s Penn Station. Photo: Lucas Blais Simpson, SOM.

A 1,200-foot elevated walkway will connect the existing elevated park at 30th Street to a pedestrian path at Manhattan West.Credit...Office of Governor Cuomo.

Then it can become a more purposive element of the horizontal mobility network, not "merely" a park.
In the second plan for Manhattan, c. 1969, produced by the independent nonprofit the Regional Plan Association, there is a great document Urban Design Manhattan which looks at horizontal and vertical and separated plane mobility elements between transit stations, the surface and buildings.
It's a great template for thinking about horizontal and vertical connections as more planned elements within the mobility system, especially at transit stations. 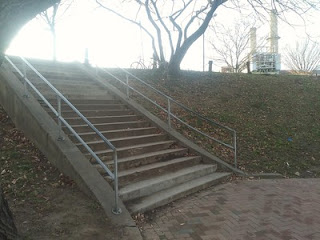 Stairway connecting 1st Street SE to New Jersey Avenue in Capitol Hill, Washington, DC.
Places like Chicago and Toronto that have related underground pedway networks, Minneapolis and St. Paul with their above-ground skyway networks, the various improvements finished or underway around Grand Central Station in New York City, and stairway, escalator, gondola/aerial tramways, and elevator connections in various places ranging from Hong Kong to Medellin to Portland, Oregon to Berkeley, California to New York City to Monaco are practical examples of how to do this.
I expound on the concept here in this piece, "In many places) Public improvement districts ought to be created as part of transit station development process: the east side of NoMA station as an example," although the piece starts out by discussing financing and implementation mechanisms. 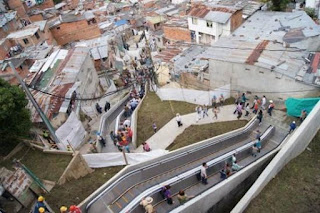 Public escalator in Commune 13, Medellín. AP photo by Luis Benavides.
While this piece aims at creating a complete framework for the elements of mobility, "Further updates to the Sustainable Mobility Platform Framework."  The framework needs an update. In the interim, I add bits and pieces through the comments section.