Philip Freelon, whose firm the Freelon Group has designed two DC branch libraries (Anacostia and Tenley-Friendship) and the newest Smithsonian Institution Museum, the National Museum of  African American History and Culture (there is a big article in last week's issue of the New Yorker about David Adjaye, the lead architect on that project, and he did two other DC libraries as well) will be speaking tonight at the National Building Museum on the planning his firm did for the DC Public Library system with regard to renovating and expanding the Central Library.

The program starts at 6:30pm

Mr. Freelon is also a member of the US Commission on Fine Arts, the federal oversight agency which weighs in on projects federal and non-federal that impact the federal interest in DC.  See "Durham architect Freelon named to national arts commission," from the Raleigh (NC) News & Observer. 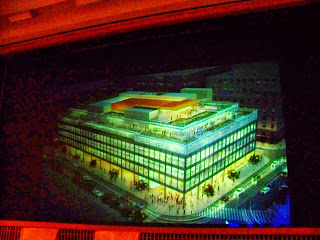 The added space would be leased at market rates to "fund" the renovation of the library.

Yesterday, he spoke at the University of Maryland College of Architecture on this and other projects, and laid out the basics of what they recommended for making over the Central Library--cutting into the building a central atrium and adding floors, as the building was designed to be taller, and as was specified in the scope of their planning initiative.

The room was full of architects and students and the general consensus by those who commented is that the building envelope is attractive but the building doesn't work as a library. ( I agree.  He actually said it's horrible as a library.)

He will present that work--which is attractive--in much greater depth tonight.

It's interesting that the New Yorker article, the immediately previous entry on the City Museum, and many of my other writings, especially on the Library issue of late ("The Central Library planning process in DC as another example of gaming the capital improvements planning and budgeting process " and "A follow up point about "local" library planning and 'access to knowledge'") but others as well, all illustrate that DC Government is engaged in a massive municipal construction program that lacks integrated and comprehensive planning.

The city doesn't really have a visitor center.  No good plan for the local archives.  The Historical Society is basically on the ropes.  Meanwhile the powers-that-be push forward a expansion of the Central Library--not to expand the range of cultural opportunities there, but to lease off the new space to non-cultural tenants, although this is justified because "the city doesn't have enough money to fund a massive library renovation on its own."

Even the library branch expansion program for the most part never reached as far as the library repositioning program in the Tower Hamlets borough of London--the Idea Store--which brought David Adjaye to prominence ("Social Marketing the Arlington (and Tower Hamlets and Baltimore" way" from my blog and "Designing Libraries - Idea Stores: the next generation" from Designing Libraries).

DCPL got Mr. Adjaye to design a couple branch libraries here, but never took the time to reconsider how the Idea Store and other library best practice examples could inform and improve the library program here.

It is incredible that we can spend upwards of $1 billion on municipal construction projects--this is not just a once in a generation opportunity but more like once in a "lifetime" or "three generations" worth of construction (unless if the quality is at the level of the urban renewal era, meaning the buildings will last about 40 years)--and not reap the maximum value from each project, individually and as an element of an integrated public realm framework.

I was back at the Hamburg exhibition,  "Building the City Anew: Imagining Tomorrow's Hamburg," which is on display until October 7th at the University of Maryland College Park School of Architecture. 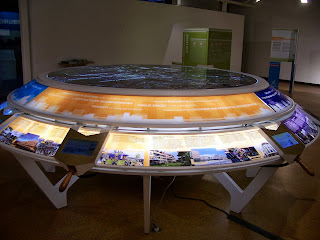 The exhibit is set up to cover four themes, and there are 10 to 11 panels on each theme. Then, they have movable Ipads set up so that you can get more info on each panel.

Anyway, the more in depth information for one of the panels on IBA_Hamburg stated that each of the projects has to achieve multiple goals and objectives,  touching on more than one of the exhibition's three themes.

Like the newest announcement about the "City Museum" elements of the Carnegie Library, the plans for the Central Library are more about "the Growth Machine" and its desires and dictates rather than producing the best possible outcome for the civic realm.

This seems more of a problem with silos rather than the growth machine.

Oh, I don't care so much about it, just how it's an amazing illustration of the resilience of the GM agenda.

First, they put forward an idea exactly the same as the Spy Museum thing, for the Central Library.

Second, they got Sandy Bellamy in there to F* it up. (I have a post in 2007 saying that her being picked meant the City Museum would go into Death spiral.)

Third they tried with a Music Museum. That failed.

---
but the silos thing is discouraging, yet another illustration of bad planning, the need for integrated capital improvements planning and budgeting, etc.

I will be writing more about this because of the Central Library presentation.

I am so so so far behind on writing.