Regional transit systems tend to be comprised of separate systems operated by different organizations.  In Germany especially, they are organized into "transport associations" and the association provides a certain level of high level cross-jurisdictional planning, and integrated marketing and fare media systems.

In the US, a couple areas have integrated systems, for the most part, but most do not.  For example, within Philadelphia, SEPTA runs subway, streetcar, buses and commuter rail, but NJTransit and PATCO also serve Philadelphia as a destination, and some SEPTA train services run into New Jersey and Delaware.

In most other places, that isn't the case, although the desire for integrated fare media systems, depending on whether or not railroads also offer weekly or monthly passes, is moving areas towards the creation of a more integrated transit framework.

As Metrolinx in Greater Toronto works towards implementing an integrated fare media card system covering all of the transit services there, including the GO railroad and commuter bus programs, the issue of offering transfers without a charge poses question for some of the systems, like the TTC in Toronto, which doesn't offer free transfers to riders of systems that originate outside of Toronto ("Metrolinx wrestles with what fare is fair" Toronto Star).  From the article:


For more than a year and a half, Metrolinx, the Ontario government’s regional transit agency, has been working on a plan to merge the fare systems of the Greater Toronto and Hamilton Area’s nine municipal transit operators, as well as GO Transit.

It’s a project that could transform the daily routines of millions of transit riders from Hamilton to Oshawa, and the Ministry of Transportation says it’s key to the success its plans to increase mobility in the GTHA.

“In order to support the unprecedented transit investments that the Ontario Liberal Government is making, we need a fare integration system across this entire region that works seamlessly.”

The goal of integration is to enable transit users to go to their nearest transit stop, pay their fare using the new Presto fare card, and never notice if they transfer onto another municipality’s system.

Integration is necessary, Metrolinx says, because more than 22 per cent of the GTHA’s nearly 2 million daily transit riders cross a municipal boundary, and thousands of them pay a penalty for it.

The TTC is concerned because if they were to offer free transfers this could cost them up to $40 million in revenue, and would be a subsidy to non-residents.

The DC and Baltimore region has an integrated fare media system using WMATA's SmarTrip card (called CharmCard in Baltimore), but the one service that is excluded is passenger rail as neither VRE in Virginia nor MARC in Maryland participate ("One big idea: Getting MARC and Metrorail to integrate fares, stations, and marketing systems, using London Overground as an example").

The draft of the DC State Rail Plan recommends developing an integrated fare media system to include the rail passenger services. 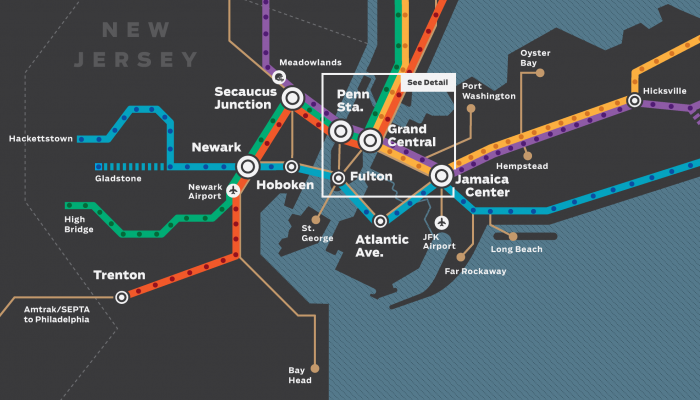 Graphic by Mattias Mackler from Capital showing rapid transit services in Greater New York as if they were one integrated system.

New York City.  When the Super Bowl was in New Jersey in 2014, more people became clued into the fact that the NYC Metropolitan area has different transit systems that don't share fare media systems, and aren't usually depicted on one map.

The NYC Transit card works on NYC services, and PATH, the old Hudson & Manhattan electric railroad service from Newark to New York City, but not on the Metro-North and LIRR railroads, and not on New Jersey Transit services.  On the New Jersey side, NJTransit runs railroad passenger services, and two different light rail systems (the one in Newark used to be a streetcar line).  The PATH system is run separately by the Port Authority (and it loses a lot of money, "PATH could be targeted for privatization, service reduction under Port Authority plan embraced by governors," Newark Star-Ledger). 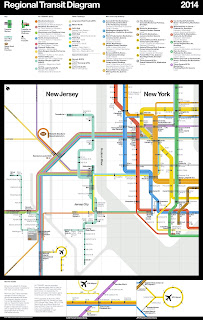 This ended up being an issue for the Super Bowl because while the game was in New Jersey, most of the big pre-game festivities were in New York City.  See "The power of understandable graphics: integrating NYC-area railroad passenger services."

The magazine Capital ran a story on the problem, "Beyond Local" and included a map graphic showing the concept.

It turns out that MTA, working with transit services in New Jersey, recognized the problems likely to occur during the Super Bowl in terms of people understanding how to get around, produced a New York and New Jersey "Regional Transit Diagram" too.

It uses a form of the Vignelli  NYC subway map, which the system doesn't use today.

Probably they chose this as a way to have a familiar style without using the current NYC subway map design language to depict separate transit services in NJ.  But they didn't solve the fare media system problem.

Both the Mackler graphic and the MTA map show what we might call the "core" rapid transit system for New York City and the inner New Jersey communities that are tied to the city, but not the complete system.

It turns out that Joe Brennan has been producing Greater New York rail maps as a hobby for a couple decades.

He writes about the map creation process here.

The most current map shows all of the railroad and fixed rail transit services for both New York and New Jersey, although it doesn't depict the full system on the north and south, although these areas are outside of the defined New York City region).

As a result, the map doesn't include Metro-North services in Connecticut either.  (The separate MTA railroad map for Metro-North shows the complete MTA route network in NY State, NJ and CT--two lines from Penn Station serve New Jersey and parts of New York State, while all the other Metro-North services emanate from Grand Central Station.)

The integrated map is a great way to show what services are available and what could be possible if MTA, NJTransit, and PATH functioned within an integrated fare media system. 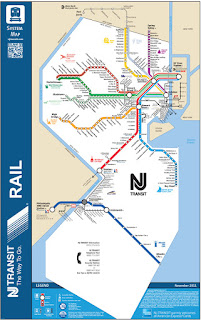 A note on mapping rail transit services in Greater Philadelphia.  The SEPTA map goes a fair distance towards providing an integrated map for Grleater Philadelphia, but it doesn't go all the way. It shows SEPTA services primarily but does include the PATCO line and acknowledges NJTransit rail services.

Because SEPTA serves Trenton, NJ and Wilmington and Newark in Delaware it depicts those areas on the map.

By adding the River Line light rail line between Trenton and Camden, and the NJTransit Atlantic City Line (shown on the NJTransit rail map), they'd have a more complete Greater Philadelphia rail transit map comparable to the maps produced by Joe Brennan, MTA, and Mattias Mackler for New York City.

However, Peter Dovak, who does cartography and graphic design for the Greater Greater Washington website, has produced such a map for Philadelphia.  (And for DC-Baltimore.)

That Mackler map is not a map of existing services, it is a 'fantasy' map of what might exist. It assumes projects that haven't been built or even proposed seriously. The 'blue' line from Atlantic Ave to Fulton St to Hoboken does not exist. Likewise, it's not possible to through-route trains from Grand Central to Penn Station.

Also, integrated mapping is the tail wagging the dog. The real coordination is far more important. It's what enables the actual unified maps of services.

And it makes little sense to integrate maps when the services themselves aren't integrated. Peak-hour oriented commuter rail shouldn't clutter a rapid transit map because it serves a completely different purpose.

And of course, Transport Politic has done similar work which was mentioned in my original post, but the Mackler graphic is a richer visual treatment.

2. But I disagree with you about the value of the map as a priming device, both for how to get around as well as to what is possible in terms of service integration.

I think full maps are important because the average person isn't likely to take the extra effort to figure it all out.

And where it is warranted, it's important to continually prime the pump on the opportunity for integration.

E.g., on a different vein, you need info from four different places for commuter buses for the region. MTA makes one map covering all of Maryland, but you need to find info from Fredericksburg, Prince William County, and Loudoun County separately to know how it works on the NoVA side.

Yes, you need to go to several different sites for commuter bus information.

But so what? The potential audience for commuter buses is pretty small; and the very nature of the service (peak hours/direction only, long distance, weekday only, etc) means that the regular riders will be commuters.

There's no reason for a casual user to ever ride those buses because the service is not meant to attract casual show-up-and-go riders the way Metrorail is.

So, leaving them off the maps doesn't reflect on a lack of integration among service providers; it just (accurately) reflects the actual level of transit service provided by those operators.

It's about depicting the breadth of the network (what I call network breadth in writings about metropolitan and regional transit planning), not depth, which I write about from time to time.

Just because people don't need to use a service all the time doesn't mean they don't have occasional needs that could be met by the service.

More importantly such services should be designed to satisfy multiple need segments.

E.g., in 2006 I went to a conference in Annapolis, because there was reverse service on the commuter bus "to New Carrollton" I was about to get there by public transit. That service was eliminated during the recession.

I think that was a mistake.

In 2010 when I went to a conference in Annapolis, I had to use a Zipcar. Much bigger difference in price, but faster, I will admit than taking transit.