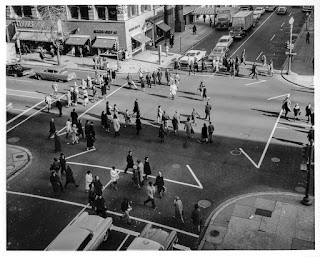 DC used to have pedestrian scrambles at Downtown intersections back when it was the major shopping district for the entire region, but as the city center's retail offer was supplanted by suburban shopping malls, eventually this type of street crossing treatment was abandoned.

I think the use of pedestrian scrambles should be a key element of the Vision Zero agenda ("Updating Vision Zero approaches") and as a way to define DC as a "Walking City."  There are many intersections in the city deserving of this treatment. 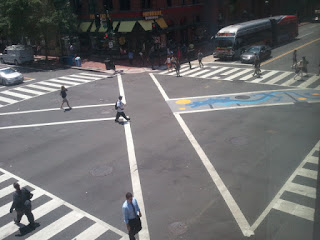 So far, the first and only modern pedestrian scramble in DC is at 7th and H Streets NW at the Gallery Place Metrorail station, about one long block from Verizon Center.

I had criticized the treatment as not being sufficiently visible and dominant in terms of the painted markings, but I noticed more recently that it has been repainted, with lines for the diagonal crossings extended across the entire intersection.  This is a good step forward because it is a street treatment that is very rare in the DC-MD-VA region, so how to use it needs to be very clear. 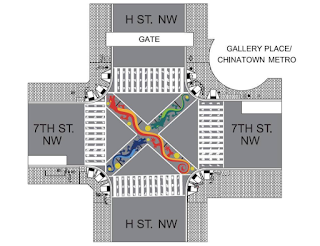 Part of one of the diagonal crossings is painted in a Chinese-motif, but oddly this hasn't been extended across the entire intersection, although the webpage for the designers of the project, Charles Bergen Studios, shows a complete concept.

Maybe they're just behind schedule.

In Europe, they use a mix of the bars and a checkerboard pattern, which to me seems to be bolder, and bolder is better when it comes to "calling out" to motor vehicle operators that they need to slow down and pay attention to pedestrians crossing the street. 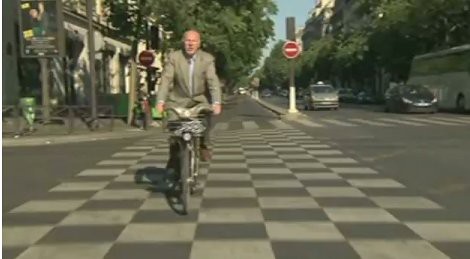 Untraditional-innovative sidewalk treatments.  Over the past few years there has been an explosion of creative crosswalk treatments that are more artistic in intent. 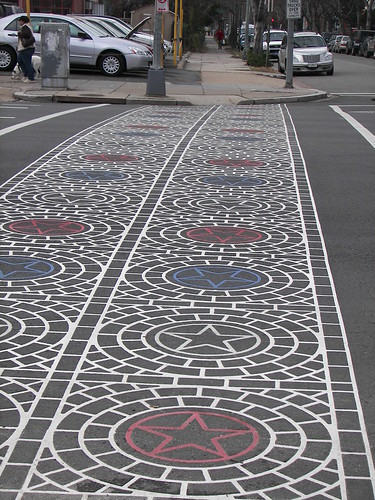 One type is what is called "stamped asphalt" with a special design. Although one streetscape designer I know makes the point that crosswalks are a traffic safety design element and artistic treatments can reduce visibility of the markings.  (Plus, over time, as motor vehicles cross back and forth over the stampings, they fade.  This is an issue on 14th Street NW).

The other type is special painting.  One example is the Chinatown crossing treatment shown above, but there are many other types, from rainbows in Seattle ("Colorful crosswalks celebrate gay pride in Seattle" Seattle Times) to colors that aren't white. and special designs.

There is also the variant of guerrilla painting of crosswalks where they don't exist ("Fighting Traffic One Paint Brush at a Time," Governing Magazine). 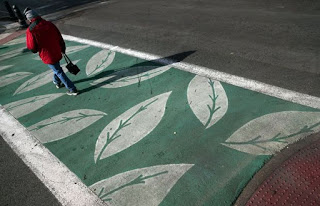 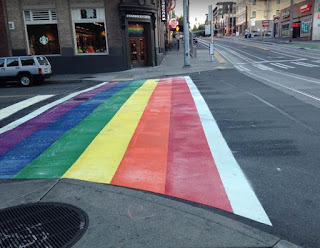 A few weeks ago, a driver ran into four people at this intersection.  According to the article, the city's police department has been advocating for an increase in pedestrian safety initiatives.  The latest crash moved the city to act.

This might be a good compromise strategy that satisfies the concerns of the FHWA.  Although I think that the special treatments like the fleur de lis or rainbows are probably fine, especially in urban settings. 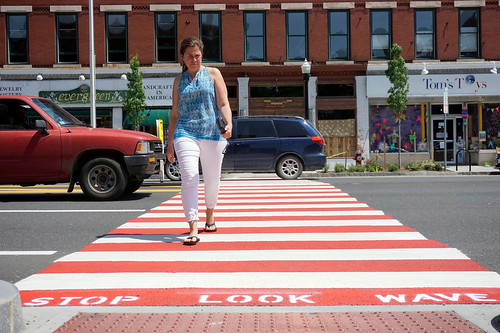