According to a presentation, A Global High Shift Cycling Scenario: The potential for dramatically increasing bicycle and e-bike use in cities around the world at the Velo-City 2016 conference, if bike mode share could triple, from roughly 7% of all trips to 23% of all trips, by 2050, 300 megatons of GHG would be avoided, and cities would save a total of $25 TRILLION. 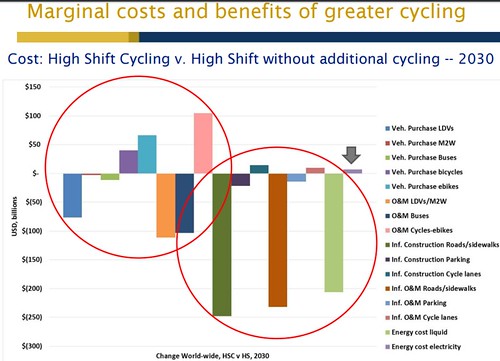 Costs from automobility vs. the savings by switching to biking as a greater percentage of total trips 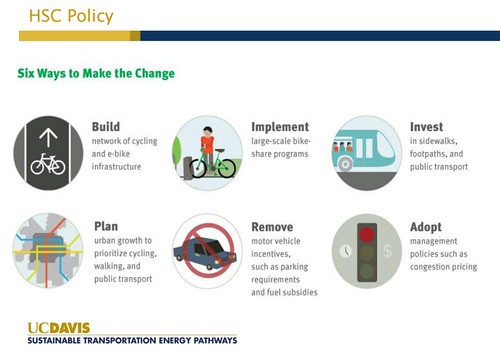 This puts into perspective the difference between incremental and quantum or second order change. See among other resources, Change: Principles of Problem Formation and Problem Resolution.

And the difference between making transformative policy vs. business as usual. 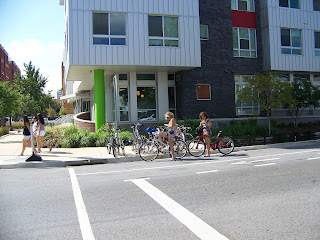 The Washington City Paper reported ("Council drops stop as yield provision from bike bill") that a provision legalizing the Idaho Stop was stripped out of traffic safety legislation, the Bicycle and Pedestrian Safety Administration Act of 2016, that the City Council is on the way to passing. (Also see the Washcycle post, "Bicycle and Pedestrian Safety Act passes without Idaho Stop.")

The Idaho Stop, depending on how it is defined, allows a bicyclist to treat a stop sign as a yield when there is no oncoming traffic or significant breaks in traffic, and may allow for treating a traffic signal similarly.

It's called the Idaho Stop because it's the law in Idaho and has been for more than 30 years.  But getting it adopted elsewhere has been difficult, because stakeholders seem to have a hard time treating bicycles "differently" from cars, especially when it advantages bicyclists.

This video explains why bicyclists try to ride this way. (Also see the Streetsblog post, "Bikes Are Not Cars, Why California Needs an 'Idaho Stop'.")

The Idaho Stop does not alter right of way rules or priority. It lets all road users clear intersections more rapidly.

Last year, a form of the law was adopted in Paris ("Paris follows the path of Idaho, and lets bicycles run red lights," Public Radio International).  Traffic in Paris has not ground to a halt as a result.

But it does show why Paris is a world leader in demonstrating a commitment to sustainable mobility at a position that eludes most other major cities.

Paris has one of the most extensive transit systems including underground subway and regional rail, was the first large scale adopter of bike share, has introduced a car sharing system using only electric vehicles, it has added a tram system to the outskirts of the city, etc.

Why I favor the Idaho Stop.  The reason that I am fine with running stop signs and street lights as a bicyclist using the Idaho Stop method is because the value of biking short distances comes from being able to move without stopping, so that a trip up to five miles is less than 30 minutes--during rush periods, typically the average speed in certain areas of the city is less than 20 mph, so a bike is competitive with other modes, and faster if you take into account walking into and out of a train station, or to and from a bus stop, time waiting for a train or bus, or if driving, the time spent finding a parking space, and then walking to your final destination. With a bike, you leave immediately from your origin point and arrive directly at your destination.

DC's sustainability plan. A few years ago I wrote a long post ("Realizing all aspects of Sustainable DC") opining that for the most part, DC's Sustainability Plan and initiatives are aspirational at best, not because people "don't care" but because the city claims to want to be "the most sustainable city in the US by 2032" but few of the city's sustainability initiatives rise to the level of better practice, let alone best practice, or leading edge innovation.

And for the most part, with some exceptions, the new policies and practices that are being adopted by DC aren't at the level of practice of other cities across the country that are leaders in sustainability planning and practice 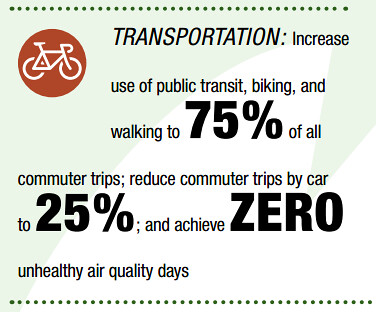 For trips to work, DC is already achieving more than 51% of trips by walking, biking, and transit, with high rates for each on a national basis (transit usage is dropping with the decline of service quality of Metrorail, but that's a matter for another day).

This rate has to increase by almost 50% to meet the goal.

Walking probably captures as many trips as it can, although there are ways to increase it, especially by adding denser housing where we can and with the addition of new amenities within walking distance in neighborhoods.

With transit, adding service to areas that are underserved would make a big difference.

There is no question that there is a lot of opportunity to improve the number of trips captured by biking ("What should a US national bike strategy look like," "Ideas for making bicycling irresistible in Washington DC," "Urg: bad studies don't push the discourse or policy forward | biking in low income communities (in DC)," and "Best practice bicycle planning for suburban settings using the action planning method").

Innovation Capital as an element of political leadership and governance.  At a presentation a few weeks ago, Martin O'Malley, former Mayor of Baltimore and Governor of Maryland, talked about political capital and innovation capital, and how once you're elected, a Mayor or Governor has only so much "goodwill" to be used on initiatives.


Political capital refers to the trust, goodwill, and influence a politician has with the public and other political figures. This goodwill is a type of invisible currency that politicians can use to mobilize the voting public or spend on policy reform. (Wikipedia)

He talked about what he calls "innovation capital" admitting that elected officials are more afraid of failure than they are appreciative of success, because failure makes it harder to pursue other goals, especially innovation--failure "uses up innovation capital."

He joked that every mayor wants to be second, and let someone else go ahead and innovate and get the bugs out, thereby increasing the likelihood of success for followers. 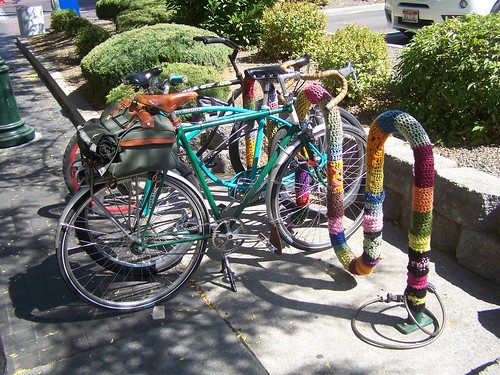 Legalization of the Idaho Stop should be seen as an element of achieving transportation goals within the city's Sustainability Plan.   In terms of innovation practice in the US, for the most part, the Idaho Stop has not "diffused" out of Idaho, even though Boise, the state capital and home to the state's largest university, is a fair sized city, with about 215,000 residents, putting it in the nation's 100 most populated cities.

In the US, were a city the size and prominence of DC to legalize the Idaho Stop, it would be a decision significant at the national (and North American) scale.

If DC truly wants to achieve the transportation goal within the sustainability plan, then it needs to take bold actions that can shift mode choice to biking (and transit and walking) from automobility in significant ways. 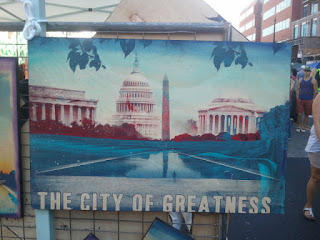 My joke about DC is that because it is the national capital of the world's most powerful nation, it defines whatever it does as "world class" without acknowledging whether or not it is actually functioning at that level.

If the city wants to achieve the transportation goal within the sustainability plan, then it needs to take bold actions that stop preferencing and privileging automobility.

To make biking competitive with driving for "short distances" (say up to 5 miles), legalizing the Idaho Stop would preference biking as an optimal mobility choice, communicating that the city is serious about sustainability.

The choice is between "gutsy" and "gutless."

Not to mention reiterating that the city is not serious about sustainability despite all the rhetoric and booths at community festivals.  And the continued investment in expansion of bicycle infrastructure and bike sharing.

Legalizing the Idaho Stop would say "Yes, we mean what we say about sustainability, DC is a leader in terms of best practice urban management."