Branding's (NOT) all you need for transit

======
A big problem in improving programs is that most people are capable of one big idea, but usually "the one big idea" ends up addressing only part of the problem. A systems and structural approach goes much deeper.
======

When I saw this piece in Mobility Lab Express, "Consistent branding can increase transit ridership," referencing an effort by Stewart Mader, chair of the PATH Riders’ Council, to raise transit use by improving branding, I couldn't help but think of the Beatles song "Love is All You Need." From the article:


Some transit systems are iconic for their fonts. New York’s Helvetica, London’s Johnston – these fonts hold a special place in each city’s ethos.

But they also exist for practicality: whenever you see these fonts in the city, you implicitly know it’s affiliated with transit.

This is intentional. Consistent branding is a huge part of wayfinding, or the signage that helps people easily move around cities. And it even has the potential to increase transit ridership.

That’s what Stewart Mader believes. The chair of PATH’s Riders’ Council (you might know him from his New York/New Jersey subway map) created a database of transit agencies’ brand standards manuals from his “personal library of branding, wayfinding, and digital-strategy resources I’ve relied on to help inform the Riders’ Council collaboration with PATH,” he said.

“I found these resources useful, so I figured I should condense them on my website,” he said. “Transit agencies like it because I link directly back to their sites.”

“I want to help transit agencies exchange best practices,” he told me.

Mader thinks it’s important to “blend distinctiveness with standardization.” Distinctiveness – like New York’s Helvetica – is what makes a place special. But standardization makes transit easy to use. And when the customer experience is good, “people will take transit more,” he said.

Branding is not enough in and of itself, not "all you need," to increase transit ridership. It helps, sure.  Yes, it is a key element.

But at best it's the third element of a comprehensive approach for the design and delivery of successful transit as a system.  Delivering transit as an integrated system is what will increase transit ridership in substantive ways.

The first element is an integrated transit/mobility system a la the German transport association model. That means that at the regional scale, all the transit and mobility agencies are part of one overarching organization focused on integrating services, planning, routes, and fares.

Great branding is not enough to make PATH fundamentally better when it isn't fully integrated with MTA railroad and New York Subway operations, nor NJ Transit.

As it is, PATH goes a step further than many transit systems, by integrating its transit fare payment systems with the NYC Subway transit farecard, even though the transit system is New Jersey-based, and it does provide high quality service to Lower Manhattan.

Part of a necessary transit improvement program in Greater New York would involve inter-connecting the systems, such as by extending PATH lines further into NYC (e.g., "PATH train to Staten Island proposed, with details to come," Staten Island Advance) and the NYC Subway into New Jersey ("A Subway Ride to New Jersey?," New York Times), and merging a number of MTA and NJ Transit rail lines for through running, etc.

A number of groups are calling attention to this, such as Jim Venturi of Rethink Studio ("NJ Transit won't take you to Queens. But Jim Venturi will," Bergen Record)

Within an integrated transit organization and delivery system, the second element is treating transit as "a design product" and ensuring that each and every element within the system of providing transit and mobility services is designed to be effective, efficient, successful, powerful and connected.

Transport for London, transit in Paris, and the various systems in Germany and in Austria and Switzerland using the German transport association organizational structure are probably the best examples (there are likely some Asian examples with which I am unfamiliar). Melbourne too. I wrote this last fall about London:

Key to this development was Frank Pick, who started at the agency being responsible for communications ("PR") and who laid the groundwork for corporate branding by coordinating all elements of the program into an integrated and extensive transit system -- advertising, branding, station architecture, vehicle design, and mapping -- with the highest standards for "design."

That legacy had been maintained through the creation of "product design managers" for the various transportation modes managed by the successor agency, Transport for London. But more recently, because the agency has been crushed by needing to find money to pay for Crossrail, in part because the national government cut back its contribution, they've cut these positions (and many other programs across the system). 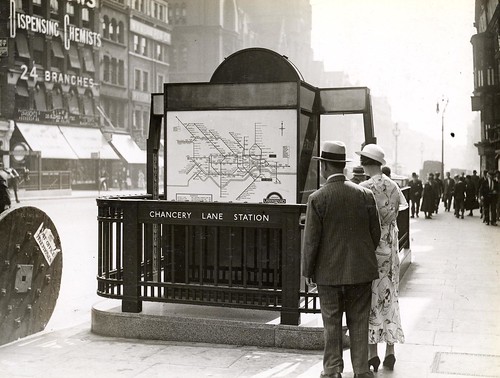 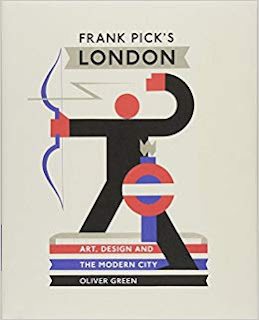 I just bought but haven't yet received Frank Pick's London: Art, Design and the Modern City

Transit as a design product: transit as a system must be complete, integrated, and legibile.  The creation of high-frequency bus networks, night bus networks ("Night and weekend transit/subway service: Metrorail edition" and "Slight revisiting of overnight transit service: San Francisco"), the program around the creation of true bus rapid transit lines, such as in Cleveland, or the collaborative integration of transit agencies in the Raleigh-Durham area under the GoTransit brand ("Will buses ever be cool? Boston versus the Raleigh-Durham's GoTransit Model") are other examples of applying usability approaches to transit. 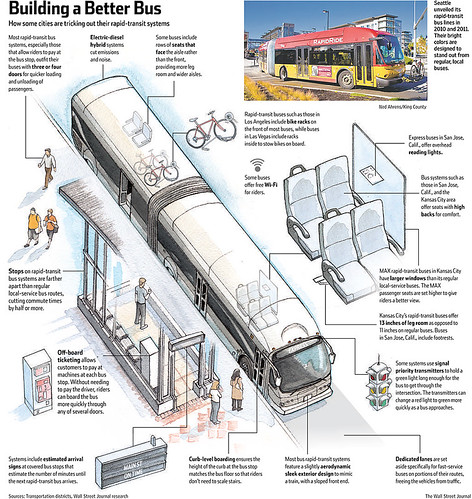 Even when there isn't a formal integrated system, many regions systems do provide integrated "journey planner" applications. In the DC area, WMATA has done this for more than 15 years. MTA in NYC released their first such app earlier in the week ("New MTA app to help streamline commuting for even PATH and NJ Transit users," Bergen Record).

Finally, the third element, tying it all together, is an integrated branding system. Branding is more than a font or a logo.  It includes design within every element of the system, in all its aspects, from signage to liveries for trains and buses, routes, stations and stops, a combined call center, wayfinding systems, etc.

This entry discusses design thinking, design systems, etc. as it relates to (cities and) transit in a comprehensive and thorough way:

This entry lays the groundwork for my thinking about transit infrastructure as a key element of civic architecture.

-- "Transit, stations and placemaking: stations as entrypoints into neighborhoods," 2013

For a bus-only system, Raleigh-Durham NC gets toward this, in a setting where the agencies are still separate.  In seeing the various other transit systems across the country when I travel, outside of the NYC Subway system, none really stand out from a "branding" standpoint.

Most transit systems are disconnected from wayfinding.  On that score, London takes it furthest, using the same mapping system to provide information for leaving transit stations, the area around transit stations including printed guides, bus stops, the Legible London pedestrian-focused wayfinding system, and the maps on bike share station kiosks.

In terms of subtle indicators of branding, I was impressed with how Merseytravel in Liverpool--they are responsible for local transit planning and directly contract and run the train system, although because of the UK's strong privatization rule for buses, London being the only exception, bus graphic design/liveries are an exception--uses the color yellow in their brand and in various elements of the furniture and design architecture of the system, from the color of benches and other elements at bus stops, to ticket offices, even bike racks in the main bus station complex, Queens Square, and the framing of system information posters, etc.

This is in line with the point I made almost 15 years ago, that bus stops especially are key marketing touchpoints for transit. 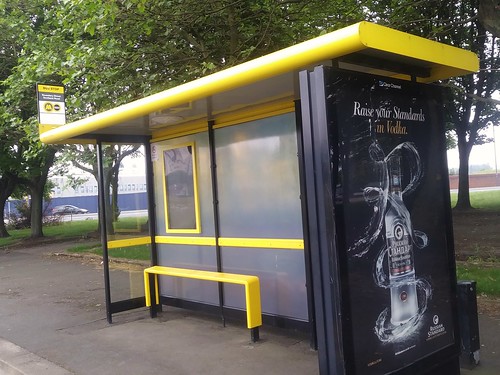 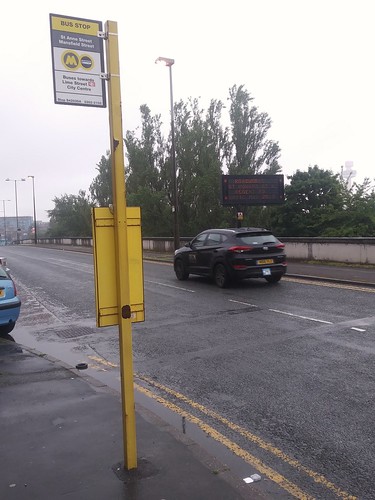 Bus stop sign stanchion is yellow, Merseytravel, Liverpool. In Liverpool, the bus "system" doesn't use yellow on bus liveries, so a yellow stanchion stands out. In London, because all the buses are red, a red stanchion would "blend in" to the bus while at the stop, becoming invisible. But even so maybe it's worth it, to make very clear the brand connection between the bus stop and the bus? 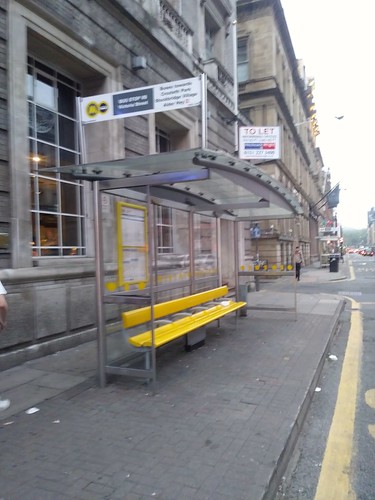 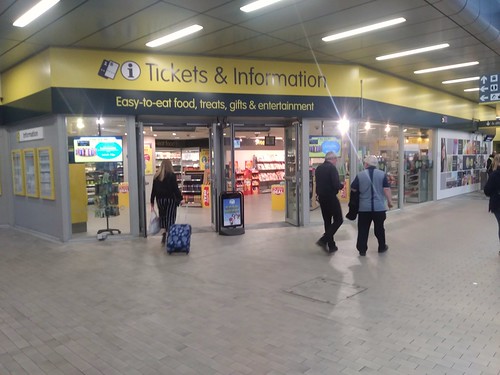 Merseyrail Liverpool Central Station transit ticket and information office. The local rail transit system in Liverpool is more like the PATH system in that it is comprised of railroad equipment, not "heavy rail" vehicles. That has likely shaped the system in terms of how it still has ticket offices, by comparison to more typical local transit systems like the London Underground. 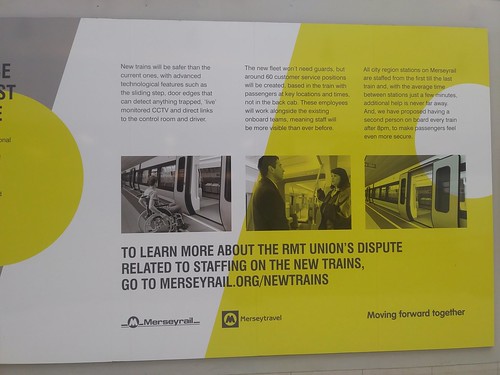 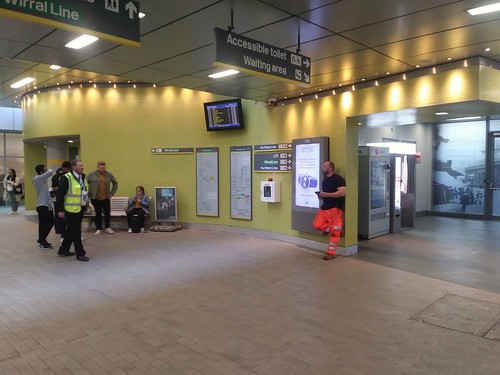