Speaking of Aaron, about one month ago he blogged the piece "Local urban scholarship," making the point that some communities are well documented through historical research and publications, while many are not.

I have a bunch of pieces on cultural planning, including on the value of community media ("Voting vs. civic participation | elections vs. governance") and another making a point similar to Aaron's but about documentary film-making ("Culture planning at the metropolitan scale should include funding for "local" documentary film making," 2016).

But his piece makes me realize this needs to be expanded and extended.

Culture planning at the state scale.  "State" scaled cultural plans and local cultural plans ought to include an element on history and culture documentation covering print, visual, and aural media forms.

An an example of the aural, I've blogged about the podcast done by Preservation Maryland called PreserveCast.  Ideally it should also be carried by public radio in the region.

Culture planning at the metropolitan scale. And at the "local" scale, I'm starting to think that there should be metropolitan-scale culture plans too.

I had a germ of that idea more than ten years ago, when I realized that DC's City Museum could have been more successful if it had been positioned as a regional history museum, because face it, much of the history of the places in the metropolitan area outside of DC proper is inextricably linked to the City of Washington.

But the metropolitan scale is particularly important for local/metropolitan urban, culture, and historical scholarship.

And for media and communications.

In fact, I've been meaning to blog separately about one of my latest ideas, that instead of every community having their own "community access" channels (you could still have them), what about a metropolitan scale cultural television programming initiative, a cable channel but featuring the best of what the area has to offer.

Rather than the kind of ratty stuff most communities do, instead do it at the scale and quality of production values evinced by NYC's cable/broadcast channel, WNYE, branded as NYC Life or the Book TV programming on the weekends by C-SPAN but around culture more broadly.  Another model is the CUNY TV channel in NYC by the City University of New York and BRIC TV, the cable access channel in Brooklyn. 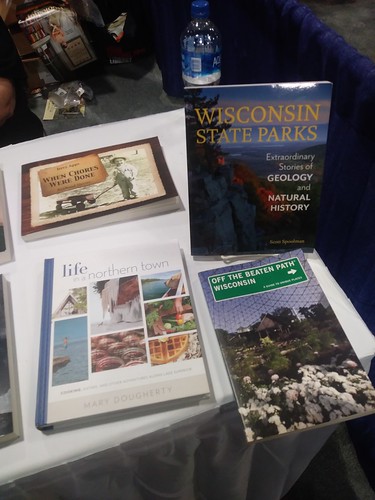 Wisconsin Historical Society.  Just after the piece it was the National Book Festival in DC, sponsored by the Library of Congress, and one of the features is a kind of "Hall of States" featuring exhibits by the state affiliates of the LOC's Center for the Book.

Many of these exhibits feature state-specific publications on writers from the state, literary maps, best books on the state overall or from the past year, etc.

University presses.  Many states are fortunate to have such organizations with such publishing programs, as well as university presses, which tend to publish these kinds of titles as well.

Bookstores carrying local books once they've been published.  Another element is being able to find these books locally after they have been published.  While Local History Press is good at getting their books into bookstores, university and nonprofit presses are less well represented.

Local museums tend to not do a great job with this--Museum of the City of New York is an exception, as is the National Building Museum in the DC area, and art museums like PS1 in NYC tend to have great bookstores with a good deal of coverage on local art matters.

At Christmas, I wanted to buy the book Chocolate City: A History of Race and Democracy in the Nation's Capital for my next door neighbor, as she had been featured on a local NPR story that was out of the same theme, and I had to go to a couple bookstores before I could find it, and where I did buy it, Busboys and Poets on 14th Street NW, they only had one copy.

So I was pleasantly surprised how this year the booth for the Arlington Historical Society at the Arlington County Fair featured a slew of local publications for sale that would be very hard to find outside of a library. 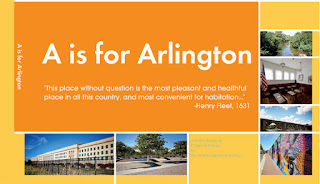 Probably every community needs to publish a book comparable to "A is for Arlington," which was produced and published by the Arlington Public Schools.

"some communities are well documented through historical research and publications, while many are not."
You've heard this joke before- A cop sees a drunk man searching for something under a streetlight and asks what the drunk has lost. He says he lost his keys and they both look under the streetlight together. After a few minutes the cop asks if he is sure he lost them here, and the drunk replies, no, and that he lost them in the park. The cop asks why he is searching here, and the drunk replies, "this is where the light is"

Some neighborhoods lend themselves to easy research or in the case of several Shaw histories, make the narrative fit all the easy to find evidence. When I engaged in the Truxton Circle Neighborhood History project it involved a lot of tedious work. No one was writing about my 18-19 blocks of Shaw. No one famous lived here. We had Dunbar, but if someone was doing a history of Dunbar it was strictly Dunbar HS and had no relationship to the adjoining blocks.
Thankfully as more collections and resources are digitized and catalogs are more accessible, this research becomes easier and it is just a matter of creating a narrative that explains the evidence, as opposed to just hunting down evidence that confirms the prevailing narrative.

Oh and "the book Chocolate City: A History of Race and Democracy in the Nation's Capital" was one of my book groups' reads. The thesis could be summed up as the white man is always trying to keep the black man down. Well that was my interpretation. Also the section for the late 19th Century was too damned long.
Besides that it was an interesting book (available for Kindle) showing how through history people of color have been oppressed in the city.

... one reason why the DC Community History project is a good thing. But my criticism of it is that people don't work with "decent" historians enough, to link the local experience with historiography more generally and look at things not just strictly within terms of the neighborhood, but also in terms of how wider events and themes impact them.

I sometimes would get the occasional bad evaluation on my walks for culturaltourismdc, and I figured out it was because I "wasn't providing enough history."

So at the outset I would explain that I was less focused on microhistory and more about broad themes, more urban sociology of the built environment than a strict history.

DC is lucky that there are so many documents that exist and can be found.

That being said there is so much beyond that. I find cool things in weird ways through ephemera, such as the Civil Defense maps for DC c. 1959, which I bought at an flea market type sale at Pyramid Atlantic years ago -- I included a photo of the cover in a post I just did.

====
through a weird circumstance I recently found two copies of the Coolidge High School student newspaper from Nov. 1963. One ended up discussing the assassination of Pres. Kennedy. The other had an article about a presentation before a class where the presenter, an advisor to the President on DC area matters, said Home Rule was imminent. Of course, it took 10 more years to come to fruition.