Friendship Heights and the production of retail decay

The Washington Post has a story, "Friendship Heights, once known as a hub for high-end shopping, is struggling as the pandemic accelerates an exodus of retailers," about the decline of Friendship Heights, a suburban shopping district on the border of DC and Montgomery County, Maryland.
Two of the department stores on the DC side are closing--one chain, Lord & Taylor, is going out of business altogether and the Mazza Gallerie shopping center was in foreclosure ("Ashkenazy's Mazza Gallerie mall sold at auction," Washington Business Journal). 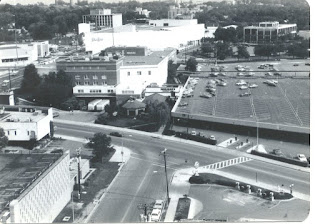 Friendship Heights in 1983.  Woodward & Lothrop in the middle, the GEICO parking deck to its rear, and Mazza Gallerie above, with Lord & Taylor to the upper right.

It had been anchored by four department stores--Neiman-Marcus, located in the Mazza Gallerie shopping mall and Lord & Taylor on the DC side, and Woodward & Lothrop (succeeded by Hechts, now Bloomingdales) and Saks Fifth Avenue on the Maryland side, complemented by a large number of retail stores from high end to more recently discount, restaurants, movie theaters, and supermarkets.

The area is also home to the Geico insurance company headquarters (a very early example of a corporation leaving a downtown location for the suburbs, which they did in 1959), has a number of multiunit residential buildings, a hotel, and is close to upscale residential areas in both DC and Maryland.

It was relatively unique in that three of the four department stores are free standing, not part of a single consolidated shopping mall. (Although this form was typical of how "town shopping districts" were organized before the 1960s.)

Urban decay as a planning concept.  The California planning regulation system has a term called "urban decay" which takes into account the impact of new development on existing places and retail districts:

This comes out of the recognition that the development of suburban shopping malls and the relocating of city-based firms to suburban locations came at the expense of center city and town locations in the core of a metropolitan area, that while the overall pie of development may have grown, certain areas ended up suffering and losing significant economic activity. 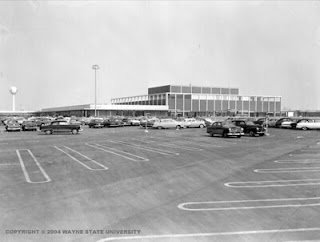 Built in 1954, Northland Shopping Center was one of the nation's first suburban shopping centers.  Created by JL Hudson Department Store believing that Detroit's residents were going to move out to the suburbs, the company built malls north, east (Eastland), west (Westland), and south (Southland) and Dowtown Detroit.  It shouldn't be a surprise that Detroit's Downtown shopping district declined to nothingness.

Approvals vis a vis urban decay in California may include mitigation steps.

Government facilitation of retail decay.  I raise this because the article points out the decline was facilitated and accelerated by the DC Government investment in the CityCenterDC project, to where many high end smaller retailers (not department stores) moved, as the project was developed in the last 10 years.

(City Center is built on the site of the former DC Convention Center and is located Downtown.)

It was recognizing that the city government's facilitation of new retail and mixed use development in places like CityCenterDC, The Wharf (southwest waterfront), and Navy Yard (southeast waterfront) comes at the expense of existing commercial areas (Capitol Hill, Georgetown, Golden Triangle, Friendship Heights, etc.) that I realized that simultaneously there should be planning and economic development supports to the existing areas, in order to maintain their competitiveness in the face of the subsidized development of new destinations.

For the most part this hasn't happened, except when instigated by a particular property owner or new development.

I wrote about this a couple times, in part using the example of Georgetown, because Georgetown's centrality as a regional shopping destination has declined in the face of new competition within and outside of the city:

-- "A brief lesson in "incentivizing" supermarkets and department stores," 2007

-- "Why it's okay to give tax increment financing to department stores but you still need to think long and hard about where you put your money," 2007

-- "Turnabout is fair play: why Topher Matthews/GGW is wrong about TIF incentives for a department store in Georgetown," 2012

Plus, Georgetown Park shopping "mall" has had all of the same problems as Friendship Heights, for decades, accentuated by the fact that it was an internally focused retail property in a shopping district that is outdoors focused.

There is a limit to how much retail a local economy can support.  The fact is that there is only so much development capacity within a place, which is a function of commercial and residential demand, and spending decisions of the existing consumer base (residents and office workers + tourists).

1.  Office workers mostly spend money in limited ways on convenience retail and food, mostly quick service.  So even if there are many workers, they don't shop much at specialty stores, department stores, etc.

The rule of thumb I learned was that office workers support 2 s.f. of retail and 5 s.f. of restaurant.  Tot that up for a proposed project and you'll see that mostly the amount of retail supported by office workers is smaller than you might think.  Although some organizations may take steps to support retail by not creating on-site cafeterias, etc., which is the case with Amazon in Seattle, etc.

And it's mostly a myth that nonresident workers will "stop at a city-located store on the commute trip home."  Instead, mostly people shop in their own communities.

2.  Residents support up to 7.5 s.f. of retail, distributed across a range of shopping types from neighborhood retail (pharmacy, supermarket, dry cleaners, restaurants) to intra-city regional, providing options like Downtown's department store or other shopping destinations like Friendship Heights or the Target and other big box stores at DC/USA in Columbia Heights.

Even with 720,000 or so residents that's support for about 5,400,000 s.f., and the city has much more retail space than that, and it continues to add to this supply as "new or renewed intra-city destinations" are created such as Union Market, H Street, or Ivy City.

3.  Suburban residents don't have much call to shop in DC, they have all the retail present within DC and more in Montgomery and Fairfax Counties especially, but also in other jurisdictions (although Prince George's residents complain that they are under-served and must go to other places to meet their full range of shopping needs).  ... even though the Downtown Macy's Department Store is significantly better than suburban stores.

4.  Tourists spend money yes, but not in ways that support a wide range of retail.  The tourists who come to DC may stay in DC or in suburban locations.  Lodging revenues are mostly captured by nonresident corporations based elsewhere.  Depending on the income level of the tourist, they are most likely to spend their money on food, lodging, and entrance fees, and not on other retail.

International tourists tend to stay in the city and spend more on retail ("Impact of Shopping Tourism for the Retail Trade as a Strategy for the Local Development of Cities," Frontiers in Psychology), but this stream of visitors can be negatively impacted by US public diplomacy.  For example, before the pandemic, one of the largest origin countries for tourism was China.  When your nation's president is stoking a trade war with China, that reduces tourism.

Intra-city sprawl and retail decay.  Sprawl is not merely a suburban phenomenon.  Intra city sprawl is created by supporting new development and districts without fully taking into account overall demand as well as the impact on existing places--for example, providing tax incentives to shopping centers anchored by Home Depot or Lowes, but not providing any supports to neighborhood-based hardware stores.

Montgomery County Maryland's massive investment in Silver Spring comes at the expense of communities like Takoma Park.  The redevelopment of the White Flint district has contributed to the "decay" in Friendship Heights and to some extent Montgomery Mall.

Conclusion.  I don't know what the solution is exactly.  (1) I do think that redevelopment planning needs to be more robust and extend to places like Georgetown or Friendship Heights, even if people think because those districts are in upscale areas, they don't need help.  (I sure didn't think that c. 2000, when I first got heavily involved in this kind of community revitalization.)

(2) The concept of urban/retail decay needs to be incorporated more widely into planning and development approval processes.

(3) Such planning efforts may need to cross borders, involving both City and County officials in a place like Friendship Heights.

(4) These efforts need to coincide with the development of renewed areas, rather than occur after the fact.

(5) There needs to be a program to mitigate negative impacts.  This could include the imposition of impact fees to provide a funding stream.

Although with the pandemic, jurisdictions are unlikely to want to do this, for fear of pushing the possibility of new development away.  New development will be rare for quite some time in the face of the pandemic.

(6) Entrepreneurship development should be an element of the program.  The Downtown LA Retail Project and the Second Street initiative in Austin, Texas ("New Second Street district stores bringing occupancy to record 92 percent," Austin American-Statesman; "Austin Second St. district thriving," Austin Business Journal) are good examples of what can be done.)

Of course, even before the pandemic, retail has been on a significant downward slide because of the impact of e-commerce, and the pandemic has only accelerated this trend.

Shift from shopping to consume experiences.  One thing that is changing too is that people are less interested in buying and consuming stuff, and more interested in consuming "experiences."  Districts like the Wharf and Navy Yard are more about eating and drinking, doing things, and walking along the water, and less about buying stuff.  Long term, this has impact on retail as well.

Of course, the pandemic doubly impacts this because many of these experiences are indoors (concerts, restaurants, bars, events), which are currently unsafe.