A few months back, I wrote "What should a domestic Marshall Plan/21st Century New Deal look like?," suggesting a bunch of sectors where focused federal government investment could make a big difference.

Charlie commented that a key element of the New Deal was moving capital from Wall Street to the nation's interior, which was starved of investment capital in general.  This is a huge point. 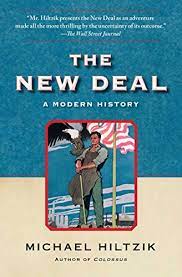 So I have started reading some books on the New Deal, right now I'm reading The New Deal: A Modern History by LA Times journalist Michael Hiltzik, and The New Deal and the American West.

There are plenty of journal and other articles as well, both old and new ("Learning From the New Deal—For the Next Recovery," Atlantic Monthly).

There is a lot of criticism of President Biden's proposed program ("Biden Details $2 Trillion Plan to Rebuild Infrastructure and Reshape the Economy," New York Times, "White House Issues State Infrastructure Grades," US News & World Report), and the planner in me would say that there needs to be more serious planning before moving forward, and innovation.

For example, I wrote a bunch of pieces after Obama was elected, suggesting reorganizing federal agencies to better address urban and rural development issues.

-- "How will Obama relate to the District?"

But reading about the New Deal and taking into account the reality of the Republican response to government generally and Democratic proposals specifically: in effect -- "Can't do.  Won't do.  F*** you" -- it's not possible to do this kind of planning because all it does is provide more time for the opposition to organize.

In such cases, planning makes it easier to stymie.  See various writings on the concept of "vetocracy", e.g., "A few steps to overcome American 'vetocracy"," San Francisco Chronicle.

(Which is tragic because it makes it difficult to develop the necessary support base to help ensure ultimate success for the program.)

And sadly, the way that government works now, it's so hard to create a program to begin with, that there isn't the concept that programs can be improved over time, with experience, because it's almost impossible to get enough votes for a "technical modifications" bill.

The process is very bad. 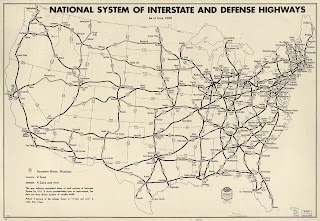 First, there was the development of technical ideas and a campaign for the idea of highways, in part spurred on by the example of Germany.  For example I have a copy of an issue of Fortune Magazine from 1936, with graphics showing how freeways can be designed. 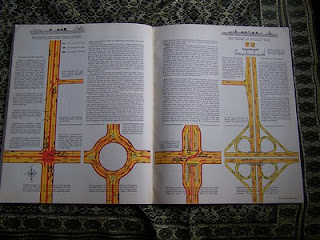 Second, building on such efforts, and Congressional mandates, in 1939, the Bureau of Public Roads released a plan, Toll Roads and Free Roads, for the Interstate Highway System.

Third, in 1944, Congress authorized but did not appropriate funding for the proposed system subsequently refined (Federal-Aid Highway Act of 1944).

Fourth, in 1956, Congress appropriated money to build the system ("Congress Approves the Federal Highway Act," US Senate), recognizing that in those 12 years between authorization and appropriation of funds there was plenty of organizing and lobbying ("Origins of the Interstate System," FHWA).

And this doesn't even count the 25 or so years it took to build the bulk of that system, and funding its maintenance, which is an issue now, both with the failure to increase gasoline excise taxes very much, the effect of inflation on maintenance, funding new projects, and the transition from fossil fuel powered motor vehicles to electric vehicles that don't pay excise taxes on motor fuels.

Biden doesn't have 20+ years to pass an infrastructure bill.  At most he might only have two years.

But for me, speaking of planning, it sounds more like "same old, same old."  This is the downside of not being able to plan, and having to develop consensus on what to do, when so many different interests have such vastly different opinions and approaches to dealing with the problem.

One key element that is needed is a massive program to build single room occupancy housing in major metropolitan areas, ideally in places with high quality transportation.  At the very least, most major cities need thousands of units of this type of housing, not a few dozen or even hundreds of units,  but thousands.

-- "One of the "solutions" to the crisis of homelessness is a lot more SRO housing," 2017
-- "Another example of the need for social housing organizations to construct social housing at scale," 2019

Granted, I often criticize people for believing the solution to complicated problems is "this one thing."

I don't believe that building SRO housing is "the one solution that will end homelessness," but lack of such housing, at scale, is a significant reason we have the problem we have.

For the most part, post-war housing and zoning policies made such housing illegal.  Without the right type of housing for a significant segment of the homeless population, obviously it becomes a serious problem.

It will only get worse, because housing will only get more expensive, making it that much more difficult for people on society's margins to be able to get and pay for housing without extranormal public support. 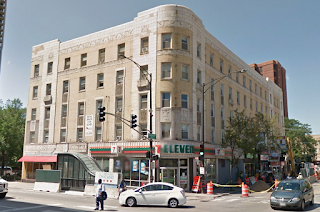 But note, it's not cheap.

SRO are important, although as I've said before even their minimal rent amounts (250 a month?) are probably above what the single homeless can pay. Again this is a substance abuse/mental illness problem in the end, and not one of affordable housing.

If you don't have those problem, there are other options:

3. Or do what hispanics do and group up 10x to a room out in garden apartments in the suburbs.


I remember when I first moved to DC as a summer law intern the most valuable thing I got was a list from a friend at Harvard Law School of all the "temp" living arrangements for the summer. There was a beautiful basement apartment in Georgetown that a federal judge was letting out, something like 500 a month but couldn't swing that. Eventually found a place in Cleveland Park for about 250 a month but had my own room.

What we've seen in the past year is exactly where (ward 4 and 5 in DC) there is an affordable housing problem in DC (that is, too many people in one place) and where there isn't.

The other is that we've solved homeless with massive hotel room buys. No idea on the price tag on that, or the success.

I wasn't very good at describing the informal housing market and how it is disappearing. And yes, I'd argue that the problem is part high housing costs for one segment, and mental health/substance abuse on the other.

The people we see on the street tend to be in the latter segment and are the most visible. They are also much harder to help and are "shelter resistant."

Wow. That story. The left behind areas are screwed. And the systems we have for "help" aren't particularly proactive. Obviously those houses need serious weatherization, among other things.

It reminds me of this, but way worse.

And it sounds very judgemental but cigarettes + lottery tickets = electricity.

Reading books on the New Deal... before the tva electricity rates were 4x higher in the south, when they had electricity. So people had it but didn't use it much because it was so costly. Just announcing TVA led the major utility company to start cutting rates in cities like Chattanooga, to try to ward TVA off.

This isn't about homelessness but the lack of reasonably priced rentals. I think the lack of housing supply has hit the point of no return on price escalation.

Two blocks from the Federal Reserve, a growing encampment of the homeless grips the economy’s most powerful person
By Rachel Siegel

1. Overall rental prices are falling everywhere. The cited articled is about Single family home rentals -- as you've written before I'd expect that large inventory PE bought up in the past 10 years to be liquidated and removed from the rental stock.

As I've said before, in most cities renting larger units or family units is a real struggle.

2. Yeah, saw the fed article. "street" people in DC are about 5x prevalent than B.C. Unclear why that is so given DC is basically hosing the pre-exisitn population in emergency leased hotels.


3. Put maybe the leased hotels will get people to rethink the SRO model

Again if I had to live somewhere for say $100-250 a month I'd expect very few options -- maybe sleep in an unfitted basement. What price points do you want a SRO to get and for how long?

I was "bad" with this recent entry because I made a bunch of changes, without re-dating it or a notice at the top.

A major change was the addition/renumbering of these two points:

2. The markets for rental and owner occupied housing function differently.

3. The markets function differently for higher income versus lower income housing segments, for both owner occupied and rental markets.

And likely the decrease in rental costs in the higher income segment was both temporary and geographically specific. Eg it happened in SF and NYC and I guess in DC, but not in most other places.

And because of the severe gap in supply, housing prices are going up generally, and this involves some renter displacement, which further stresses the market.

WRT PE, there was an interesting opinion piece in , suggesting ways to incentivize seller, especially wrt PE. I am not creative enough to see much movement on that though.

WRT price target for SRO, I don't think that's the point, because like you pointed out in a comment on SRO housing a long time (cities don't want to build it because then they're stuck dealing with it and paying for it forever -- paraphrase), it's basically social housing requiring permanent subsidy and nonmarket operation.

To be clear, we're talking about the mental illness/substance abuse segment more or less.

WRT the MI/SA segment, you have to include wrap around programs, and I would say "social enterprise" oriented employment vehicles.

It's expensive, but tent cities have really bad "optics."

A letter to the editor in the Salt Lake Tribune suggests creating an organized tent city.

That's an option. SF and Seattle do it. But it's not really a solution, more a mitigation.

I don't think this says a whole lot. Although I haven't looked at the link to tools and indicators.

In D.C., the rent is still too darned high
Opinion by Heather Raspberry

BUsiness interests and nonprofits come together to fund a ballot initiative mandating adding housing and services, spending 12% of the budget on homeless services. 4/3/2021

Tiny house communities as an option. Created and managed by the Low Income Housing Institute in Seattle.
11/27/2020