Yesterday's Post sports section also has an article on this, "'Bring it home': Bowser, Snyder speak glowingly of RFK site for next Redskins stadium."

So it's worth extracting from the 2014 entry, "An arena subsidy project I'd probably favor," the list of criteria I came up with concerning how to best leverage the presence of a sports stadium or arena.  Recognizing too that generally there are limited improvements to neighborhoods ("Residents hope Mercedes-Benz Stadium aids nearby Atlanta neighborhood," Atlanta Journal-Constitution) as opposed to commercial districts.

I came up with the list because taking the position of "no stadium" or "no public funding" rarely is successful. Knowing a project will be approved, the best thing to do is to focus on extracting the best possible deal and urban design, to stake out a position aiming to get the most possible value from the stadium/arena because it's practically a certainty that government will agree to money, land, tax breaks, etc.

This list is focused on the retail/commercial district side.  And it favors sports other than football based on frequency of events and the cost of the facility

In the attempt to create a more comprehensive list, new items are denoted by bold type. 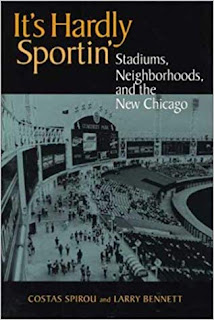 Night baseball and the impact on Chicago's Wrigleyville
commercial district.  The comment thread on the previous entry reminded me I forgot to mention the journal article, "Revamped Stadium...New neighborhood," Spirou, Costas & Larry Bennett. Urban Affairs Review. v37:5, May 2002, 675-702. It was part of the writing that ultimately was published in the book It's Hardly Sportin': Stadiums, Neighborhoods, and the New Chicago.

(There's a list of related literature in this student research proposal.  A citation listing of the piece by Chema appears to generate a good listing too.)

It's a great discussion of the changes to Chicago's Wrigleyville as a commercial district, with the addition of night time lighting and a regular schedule of night games to Wrigley Field.

The commercial district shifted from a more balanced retail mix to a focus on nightlife establishments (although the organization of the retail industry was also changing at this time, which contributed, as did the local effects of deindustrialization and the outmigration of industry from the city).

The district continues to evolve. Chicago Tribune wrote about this recently, "Welcome to the boring, tedious confines of the new Wrigleyville," arguing that the changes that have come with in-migration of wealth to the city and development to the district specifically have made it antiseptic and somewhat homogeneous. From the article:


The new Wrigleyville is an assemblage of hard edges and smooth surfaces, offices, condos and storefronts, ice cream shops and sports bars and thoughtful hotels, arranged into gray and beige blocks, impersonal and dull alongside the remaining rowhouses. It’s a lot of “new spaces.” Sound like anywhere you know? Or everywhere you know? The elegant ancientness of Wrigley Field, once bracing as you approached it, now looks buried and cramped. And a 10 screen movie theater and Lucky Strike bowling alley are still coming. Nice if you live nearby; the goal is keeping visitors close year round, especially out-of-town executives eager to pass on the usual Michigan Avenue haunts for “real Chicago.” But the trade-off is a neighborhood where all the restaurants are “concepts” and all the culture is “content.”

Am I being naive?

Probably. I know profit is the driver, and that maximizing profit creates its own justification these days. I know I am arguing for a sleazier Wrigleyville. I know this battle is already lost. But where is the outcry? Not long ago Chicago got worked up when a glass UFO was plopped on top of Soldier Field. And now I hear just everything changes, as if progress inevitably means becoming Stepfordville USA.

This is likely the case of most of the "retail" that develops because of stadiums and arenas.  It's more food and drink than retail, outside of a store or two that sells team merchandise ("Cubs' flagship Wrigleyville store might be a destination on its own," CT).

Community benefits framework needs to be added.  Another element that I didn't include in my listing is what we would call "community benefits."  I'm not sure what to include.  I do like how the basketball arena in Bilbao, Spain also includes a community recreation center, which extends to access to the court when not in use by the sports teams using the facility.

Above I've added items concerning social enterprises as part of the retail mix and a ticket tax to fund improvements in the immediately impacted area of the facility.

Another item would be access to the facility generally, and for community/nonprofit type events. For arenas, if in mixed use areas, including public recreation centers would be a plus.

The Washington Nationals baseball team provides some financial support to youth baseball. For example, this year they paid for the rehabilitation of a baseball diamond and stands at the Takoma Recreation Center ("Nationals to dedicate Bryce Harper Field, MLB). The Washington Redskins paid for the construction (but not the operation) of a community center near their facility in Maryland.