Is written up in the Washington Post ("D.C.'s first elevated park will link neighborhoods divided by river") as it nears moving towards construction within the next couple years.

When it was first proposed, I was skeptical--I think as an idea it's cool, but it's in an inhospitable location and isn't near residential areas so there isn't a lot of opportunity for adjacent revitalization, which is what you want from an infrastructure investment of more than $100 million ("Flashy one-offs vs. a program: the proposal for an 11th Street bridge linear park and the rest of the city," 2013; "DC and streetcars #4: from the standpoint of stoking real estate development, the line is incredibly successful and it isn't even in service yet, and now that development is extending eastward past 15th Street," 2015). 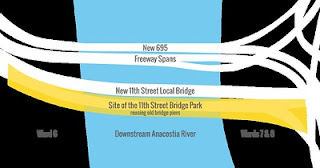 Then I was invited to serve as a Ward 6 representative on the Design Advisory Committee when they were picking a design for the project.

This predated my involvement in that:

-- "Wanted: A comprehensive plan for the "Anacostia River East" corridor," 2012

But after the design selection process was over, I was no longer involved ("11th Street Bridge Park finalists," 2014). 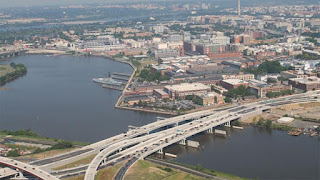 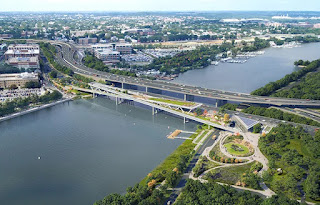 What's proposed, rendering with the park in place. 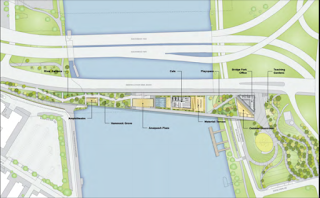 While I remain impressed with the organizing effort, how the group exhibits at festivals and are focused continually on outreach, and have organized many millions in funding to ward off the gentrification and displacement they expect to happen because of the addition of a high quality park to the area, I am back to my position that it's cool but not the best use of resources.

For one, unlike various analogous park infrastructure projects like:

the Bridge Park won't be well located, in the midst of residential areas and otherwise vibrant (or potentially vibrant) places.  It's next to a freeway.  While being over the river is cool, you'll have to make an effort to get to the Park.

It's more comparable to how Roosevelt Island National Monument is in DC but can only be reached from Virginia ("Revisiting: Access to Theodore Roosevelt Island, a national park in Washington, DC") or how you have to take a ferry to Governor's Island in New York City. 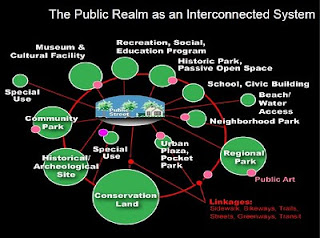 From a resource standpoint and the success of raising over $100 million, I can't but help but think that those resources would have far greater effect being invested in existing and under-invested parks, recreation facilities, cultural resources, and other civic and community assets in Wards 7 and 8.

-- "Five examples of the failure to do parks and public space master planning in DC," 2021
-- "Social urbanism and equity planning as a way to address crime, violence, and persistent poverty: (not in) DC," 2021
-- ""Utility" infrastructure as an opportunity for co-locating urban design and placemaking improvements," 2020
-- "Planning for place/urban design/neighborhoods versus planning for transportation modes: new 17th Street NW bike lanes | Walkable community planning versus "pedestrian" planning," 2021

-- "Extending the "Signature Streets" concept to "Signature Streets and Spaces"," 2020
-- "From more space to socially distance to a systematic program for pedestrian districts (Park City (Utah) Main Street Car Free on Sundays)," 2020
-- "Why doesn't every big city in North America have its own Las Ramblas?," 2020
-- "Diversity Plaza, Queens, a pedestrian exclusive block," 2020

For example, the city refuses to fully fund the reconstruction of the Fort Dupont Ice Arena ("Fort Dupont Ice Rink supporters accuse District of mishandling plans for new arena," "This is shameful: In a wealthy hockey town, D.C. kids have nowhere decent to play," Washington Post).

And something I missed some time ago, and have never written up as a dedicated entry, but should be a priority, would be undergrounding DC-295 and I-295 in the vicinity of the Anacostia River.

I have discussed undergrounding/decking for North Capitol Street, the Southeast-Southwest Freeway, and parts of Connecticut Avenue in the core.

Freeway undergrounding and removal is a trendy move in urban planning these days ("Can Removing Highways Fix America's Cities?," New York Times).  And these days the US Secretary of Transportation is pushing this as an environmental justice measure ("Pete Buttigieg launches $1B pilot to build racial equity in America's roads," NPR).  DC should get on the bandwagon.

(I also argued that DC should work with Prince George's County to create a "Trail Towns" initiative along the Anacostia River, modeled after the initiative in Pennsylvania along the Great Allegheny Passage.)

SO much needs to be done East of the River that the Bridge Park seems really frivolous.