In a Post article, "How a D.C. building collapse changed the tune of the Bowser administration," about a recent about face by Mayor Bowser about building inspections and the agency that provides them, I've been commenting, because failure in the building inspection process is something that I've been writing about for some time ("Unresolved versus Closed as a determination in handing City inspection/service matters," 2019).

A point I made is that the city administration isn't particularly visionary or proactive, it's mostly reactive ("Five new forms: is that all you've got?," 2017).

Among other areas, this is the case with planning generally ("Five examples of the failure to do parks and public space master planning in DC," 2021), neighborhood placemaking and urban design.  All the agencies plan pretty much independently of each other and very little is coordinated. 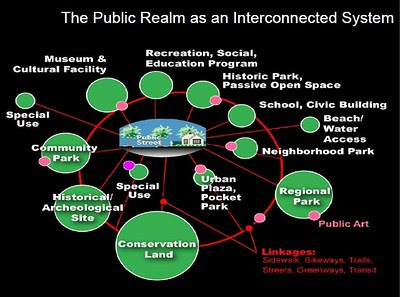 Note that VIA, the transit agency in San Antonio, has an urban design unit and manager ("VIA urban planner wants to build a better San Antonio," San Antonio Express-News.

While I have a lot of entries on streetscape issues, including:

-- "Extending the "Signature Streets" concept to "Signature Streets and Spaces"," 2020
-- "From more space to socially distance to a systematic program for pedestrian districts (Park City (Utah) Main Street Car Free on Sundays)," 2020
-- "Why doesn't every big city in North America have its own Las Ramblas?," 2020
-- "Diversity Plaza, Queens, a pedestrian exclusive block," 2020 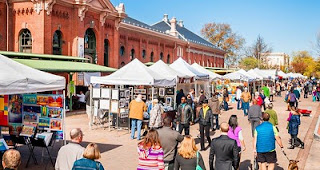 The street in front of Eastern Market is closed weekend days.
Photo: Lucas.com 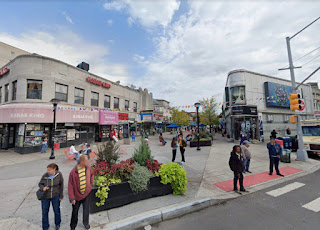 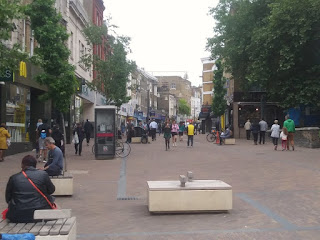 Mare Street in Hackney borough London, by the Hackney Central Overground Station
Looks like it's been pedestrianized for decades, but it's only been for a few years.

I have a couple pieces that focus on urban design planning at the neighborhood scale, specifically using the Dupont Circle neighborhood as an example, with one of the recommendations being making a section of 17th Street NW between P and R Streets, priority pedestrianized, with it being 100% pedestrian on weekends. 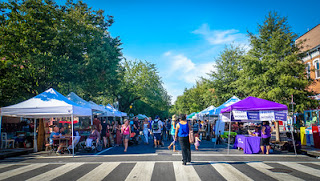 17th Street Festival.  Flickr photo by Ted Eytan.
Note that many years ago when this was suggested, I thought it was a bad idea ("How to f*** up 17th Street NW in Dupont Circle," 2007).
It definitely was premature.  But I think I was right in that a 24/7/365 pedestrian mall wouldn't be successful, that isn't to say that a weekend pedestrian mall wouldn't be successful.

Instead, DC is installing bike lanes. 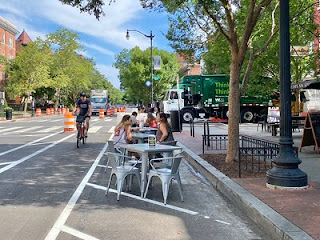 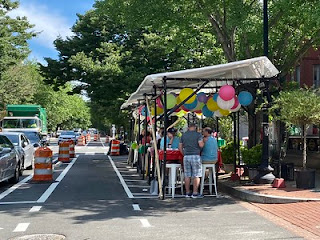 It's not that bike lanes aren't important, but they aren't always the foremost treatment that should be implemented in a center city, given other sometimes competing priorities such as neighborhood development, identity,  and nodes, promoting pedestrian activities, etc.

Not to mention the reality that in a center city, virtually everyone walks daily, at least for some part of the day. 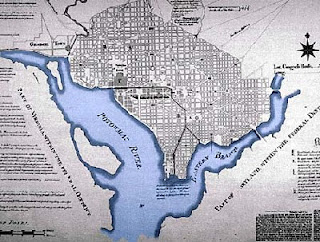 The core of Washington DC was designed in the 1790s, famously, in a plan by Pierre L'Enfant.

Bike lanes are duplicative.  Pedestrianization, at least for part of the week, would be transformational.

But I am totally resigned to the fact that DC planning missed this opportunity.  Which is happening in other places across the city, in neighborhood centers that need other than bicycle treatments to strengthen their urban design, placemaking, and identity elements. 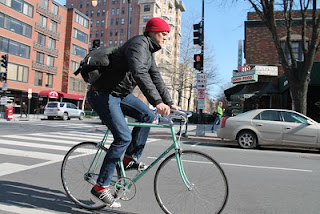 Bicyclist on 17th Street NW. Flickr photo by Elvert Barnes.
Walking as placemaking | Pedestrian planning as placemaking.  I'll admit that I haven't kept up with the best practices in planning for walking.
Many years ago DC created a Pedestrian Master Plan, but I haven't re-read it in years.  (It's telling that on the Pedestrian Programs DDOT webpage, the link for the PMP is broken.)
I don't think I've seen a pedestrian plan that is organized around placemaking in the vein of Dan Burden's "How Can I Find and Help Build a Walkable Community?."
That's a good way to term it: a "walkable community plan" versus a "pedestrian plan" aimed at enlivening and making great places as well as promoting walking. 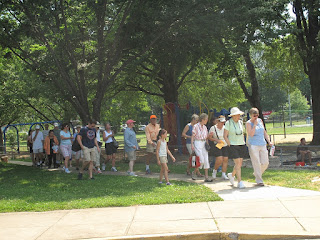 A walkabout in Arlington, Virginia 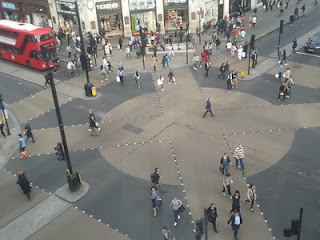 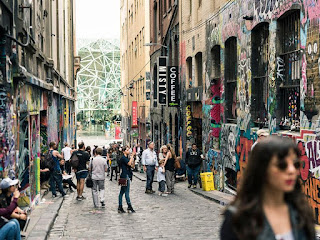 A laneway in Melbourne.
A walkable community plan would incorporate other treatments or elements besides sidewalks such as intersections, plazas, pedestrian "malls," parklets, laneways and alleys, walking as an element of commercial districts, "safe routes to school," night time lighting issues,  wayfinding signage, the walking element of trails/shared use paths and transit, bus shelters and stops, street furniture, events and programming ("Events and programming in a systematic manner," 2017, "The layering effect: how the building blocks of an integrated public realm set the stage for community building and Silver Spring, Maryland as an example," 2012), etc.
-- "Now I know why Boulder's Pearl Street Mall is the exception that proves the rule about the failures of pedestrian malls," 2005
-- "Revisiting stories: Night-time safety: rethinking lighting in the context of a walking community and Detroit's reduction in pedestrian deaths from lighting upgrades," 2018
Some communities like San Francisco and now Salt Lake City are moving to integrate urban design and multi-modal planning (like my Signature Streets concept) into their pedestrian-focused programs, sometimes called Livable Streets.  Parklet and other initiatives are related.
-- "Salt Lake wants its streets to evolve," Building Salt Lake
This presentation has been superseded, but when I first saw it eleven years ago, I was impressed.
-- Sustainable Mobility & Climate Action Strategy, San Francisco Municipal Transportation Agency 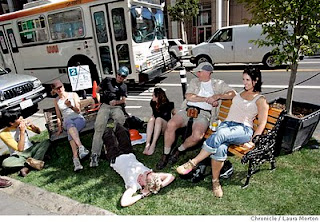 The group Rebar declared Sept. 21 (2006) "Park(ing) Day" and installed this temporary park in a parking space on Mission St. in downtown San Francisco, CA. The group moved the park to several different parking spaces throughout the day. Port-a-park: A temporary park was set up in a parking space on Mission Street by Rebar, an art collective. The park was moved several times that day. San Francisco Chronicle photo by Laura Morton
I know at the time it didn't make recommendations for pedestrian spaces and districts.  It focused on sidewalks and parklets, which makes sense because pop up parklets were "invented" in San Francisco by a public space advocacy group called Re:bar. 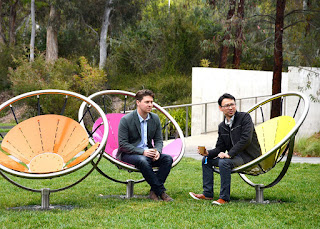 Flower chair, Street Furniture Australia.
Years ago, I remember being impressed with the visionary aspects of the Toronto Walking Strategy.  And how Minneapolis has both a Pedestrian Master Plan and a Safe Routes to School vision plan.
Walk (and Bike) to School initiatives can be a good way to bring walking focused improvements to neighborhoods in ways that improve the walk to school experience for children and the neighborhood more generally, and simultaneously.
The Washington State DOT publication,  School Walk and Bike Routes: A Guide for Planning and Improving Walk and Bike to School Options for Students, is awesome.
Advocacy groups like Feet First of Seattle and Starkville in Motion (Mississippi) have utilized walk to school initiatives as a way to drive pedestrian improvements more broadly across their respective communities. 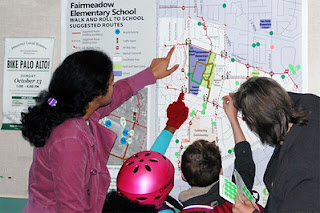 Safe Routes to School maps can be repurposed as brochures, signage, etc.
I really like the maps done for schools in the Palo Alto School District.  The school district does maps for all the schools, not just elementary schools, and produces large poster versions placed in the school foyer, etc.
Other pedestrian focused advocacy groups I've been impressed by are Walk Boston, and Walk Denver.  And Active Transportation Alliance in Greater Chicago, while focused on biking, has a strong pedestrian advocacy program too. 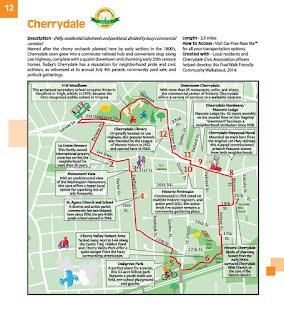 Arlington County Virginia has branded its transportation pedestrian program as WalkArlington, which I think is smart, and they have active programming to promote walking, as well as the various infrastructure and safety focused programs.
They have produced Walkabout maps for all of the county's neighborhoods, which is great.  (While area multimodal maps are sometimes posted, the County  should also post these Walkabout maps in public buildings like libraries, at transit stops, schools, etc.)
Safety is a key element.  It's important that the plans also acknowledge the issue of safety, loitering, homelessness, camping in public spaces, noxious uses, etc. ("Los Angeles Goes to War With Itself Over Homelessness," New York Times). 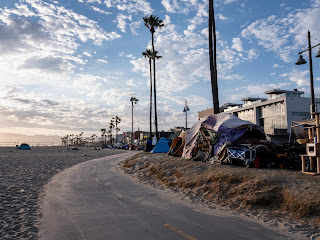 Tents of the unhoused in front of Snapchat’s former headquarters in Venice, Calif. Credit: Glenna Gordon for The New York Times
Also see "Systematic Neighborhood Engagement," 2007, for the discussion on community readiness for certain types of urban design treatments.

I'd start by removing the ability of non-District cars to park on the street in the L'Enfant city.

Moving RPP towards the $1000 year pricing would also help. If you want a car get a spot.

Again the purpose is make car transportation a luxury good. $10 fees on ride share drop-offs in the District would also be a good start.

I'm gonna sound like a heretic here, but this comes from the commercial district planning side of me...

Is non-resident parking a big issue there? Plus, could somehow, the parking assets that exist be organized in a shared parking program including valet services, along the lines of what I suggested in Takoma Park and Silver Spring?

Plus, something I should have also re-mentioned, an intra-district e-shuttle to move people to and from the district without driving. (It is mentioned in the second entry.)

That should be a 7 day/week service, and operate throughout the Dupont Circle district.

You don't want to absolutely discourage people from coming (although I can't really see how non residents would be that interested in coming to 17th St. NW), but minimize the problems that it can create.

Pricing RPP is tricky. I definitely don't lean to $1000. But a lot more than $35/year. The highest I've come across in North America is in Canada, which is about $50/mo. (Canadian).

I think that's a number worth shooting for.

A high drop off fee for ride hailing is a good idea.

I've always been pissed that the tax on ride hailing is less than the sales tax on use of car sharing (10%).

=======
BUT, I do think that as part of neighborhood "walkability planning" and commercial district planning and urban design planning, that "transportation management districts" should be created, and the sharing of parking resources be legalized.

When I first came to DC, I worked at 16th and P, and would eat at places on that strip including Boss Shepherd's and Dupont Italian Kitchen, which is still there. I used to get sausage pasta and they had a great antipasto salad. They still have the pasta but dropped that salad decades ago.