In 2017, when I was writing the series on "complementary transit network improvements" first on the DC area Purple Line light rail program ("Setting the stage for the Purple Line light rail line to be an overwhelming success: Part 2 | proposed parallel improvements across the transit network") and then on the Silver Line Metrorail in Northern Virginia ("Using the Silver Line as the priming event, what would a transit network improvement program look like for NoVA?"), I started thinking about how to apply this approach to neighborhoods and urban design.

Except I haven't done any writeups.


One is the Southwest area of DC, spurred by the coming "online" of The Wharf district, the revitalization of the 1960s era urban renewal program on Washington Channel. 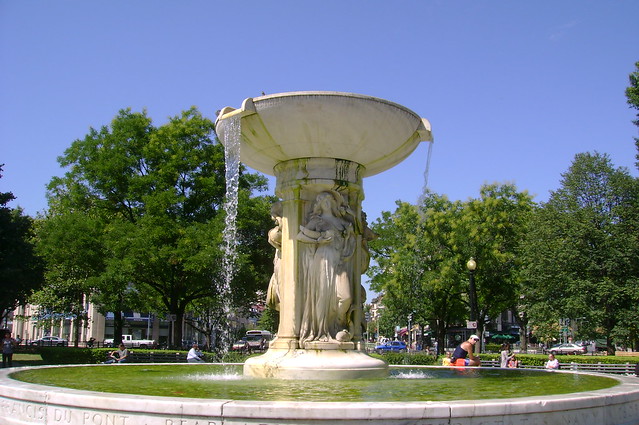 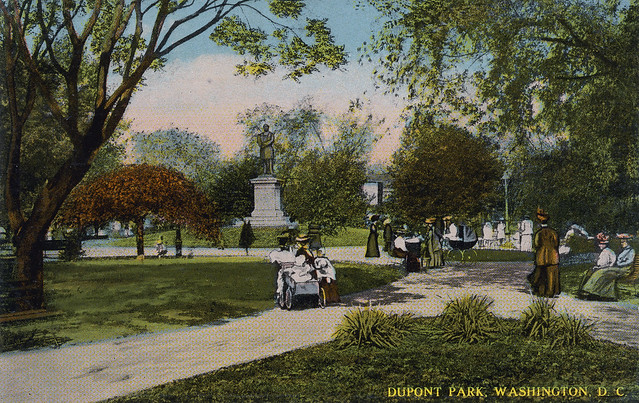 The ideas for Dupont Circle also grew out of my frustration that separately, in an uncoordinated way, there are two major urban design interventions happening there.

One is the construction of a canopy over the Dupont Circle North entrance to the Metrorail, and immediately adjacent to it is the creation of a "cap" over the undergrounded section Connecticut Avenue, which starts west of the circle and gets back to the surface closer to R.

At the very least Metro Station canopies ought to have an architectural lighting treatment. 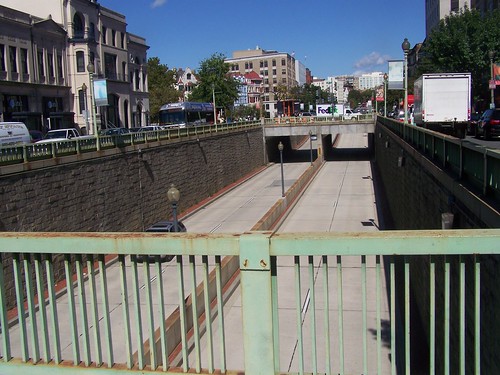 In "PL #5: Creating a Silver Spring "Sustainable Mobility District: Part 1: Setting the stage" from the Purple Line series, I laid out the urban design foundational thinking, applied but not unique to Silver Spring. 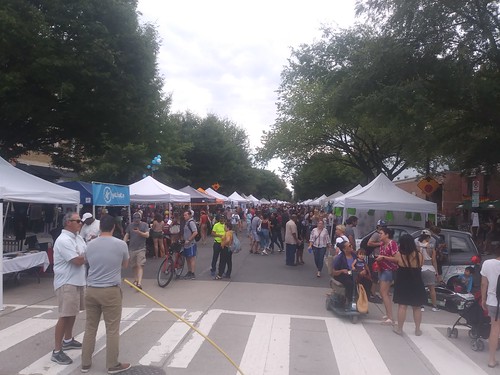 At the recent 17th Street Festival, I ran into people I knew and we talked about this kind of stuff, including how a group of residents are opposed to the plans by DC's Department of Transportation to put in a cycle track on 17th Street ("17th Street in Dupont could get a protected bikeway," Greater Greater Washington), which between P and R Streets functions as the "neighborhood serving commercial district" anchored by restaurants, a supermarket, hardware store, and sundry retail. It contrasts to the more regionally serving retail districts on Connecticut Avenue and 14th Street. 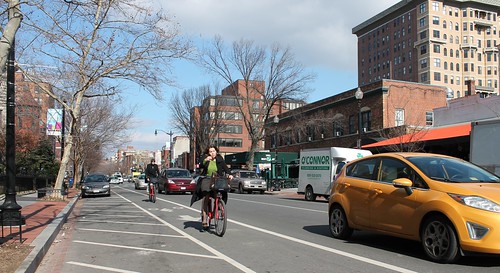 14th Street in particular has drawn away a lot of business from the restaurants on 17th Street.

The conversation reminded me of my "framework" concept, including a big one, that on weekends, 17th Street between P and R Streets should be pedestrianized.

From a sustainable mobility standpoint, I think pedestrianizing this street for at least part of the week would serve far more people than a cycletrack, accentuating the pedestrian-centricity of the neighborhood.  Plus there are parallel bicycle facilities on neighboring streets.

1.  All of the neighborhood's parks, open spaces and other civic assets should be managed as a network. Including Dupont Underground, the art facility using the old underground trolley station.  (This is complicated because it would involve the National Park Service, DC, and nonprofits.)

This would include events like First Fridays, produced by Historic Dupont Circle Main Streets, the free weekend museum event in June sponsored by the Dupont-Kalorama Museums Consortium, etc. 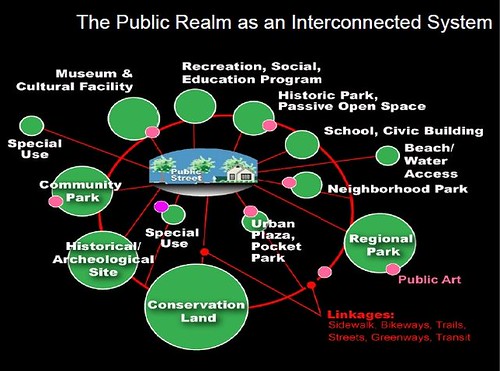 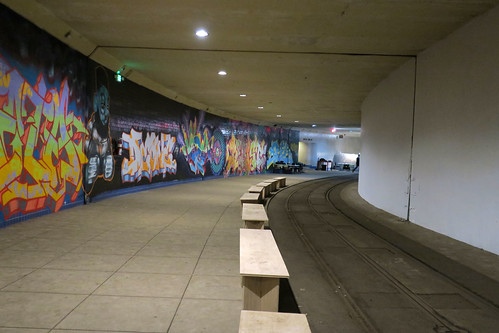 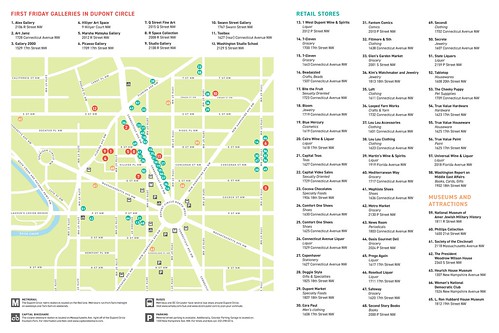 2. Remove at least one traffic lane from Dupont Circle and expand the Circle.  In the 1950s, many of DC's "traffic circles" which function as part as neighborhood parks, were shrunken by the conversion of some of the park land to traffic lanes.  Both Thomas Circle and Logan Circle got this treatment. 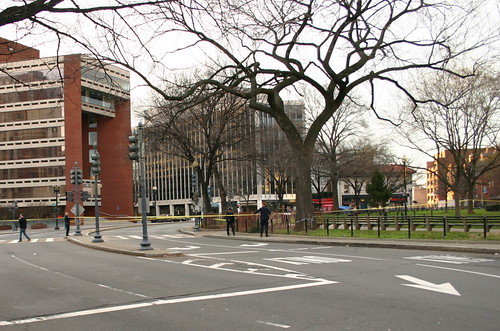 But in 1980, Logan Circle was restored, in part as a complementary improvement in association with the introduction of Metrorail--by reducing traffic throughput, it was thought that more people would be encouraged to use rail transit.  Around 2005, similar restoration occurred at Thomas Circle.

If you were to do lane by lane traffic counts, it would be proven that the lanes closest to the Circle are minimally used.

3. Coordinate decking over a section of Connecticut Avenue with Dupont Circle North Metrorail Station exit improvements. Ideally the canopy could have even been a public space building--community building (I've thought that exit station structures could have public space elements along these lines for awhile), but should be a public art element (e.g., neon).

-- "The Proposed Design for a Public Deck in Dupont Circle," Urban Turf 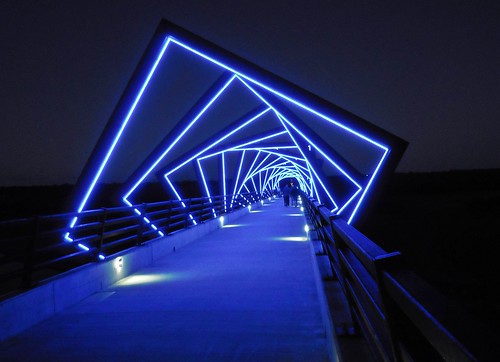 A number of station grounds for rail transit stations in Montreal are used for community food and garden market stands.  The grounds of the Mont Royal station include a visitor center.  But shown is the Atwater station. 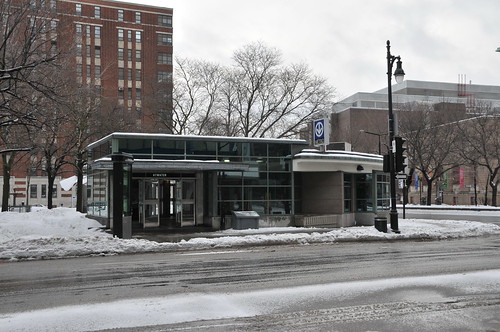 The station entrance buildings for the Metro system in Montreal gave me the idea that it would have been possible to build a community serving building on the top of the these structures.

4. The building used by the Main Street program, an old NPS building, should serve as a true visitor center.  Supporting sub-city tourism in part through the creation of a network of visitor centers located in high profile neighborhoods is discussed in "Some DC tourism issues (National Tourism Week: May 7th - May 13th)."

-- "Why Miami-Dade has more visitor centers than any city in the U.S.," Miami Herald

5. Make 19th St. between the Circle and Q Street a permanent pedestrian street (but with access for deliveries.)

6. Make 17th Street between P and R Streets a pedestrian district on weekends.

This is discussed in more detail in the next entry, "More about making 17th Street between P and R a pedestrian space on weekends." 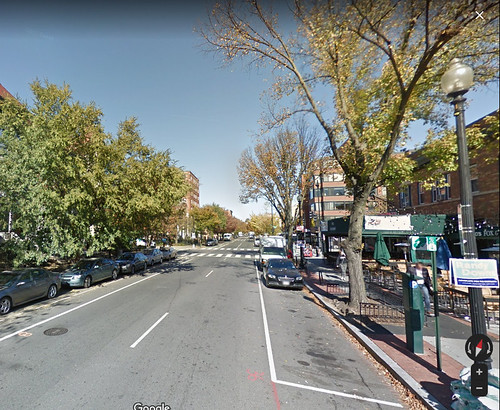 When empty such spaces are very much forlorn, and this was the problem of the early wave of pedestrian malls in the US, which were tried out as a way for center city districts to compete with the rise of suburban shopping malls. 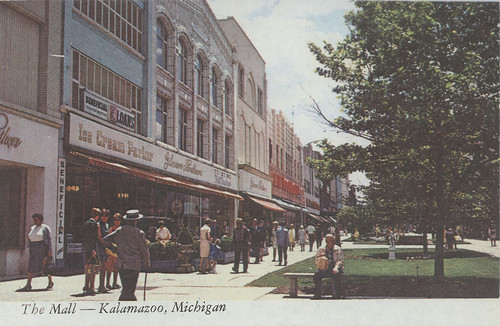 The Burdick Street pedestrian mall in Kalamazoo, Michigan was the first such urban design initiative in the US.

However, seeing pedestrian districts in Essen, Dortmund, Hamburg, Liverpool, and various parts of London, like Mare Street in Hackney Wick, made me realize that while I am right that most US cities lack the volume of pedestrians necessary to make "pedestrian malls" work 24/7/365 ("Now I know why Boulder's Pearl Street Mall is the exception that proves the rule about the failures of pedestrian malls," 2005), this doesn't mean that pedestrian districts can't be developed in the  US.  We just have to be very strategic about it.

We should start small, and focus on those places where it makes the most sense and is likely to be very successful. 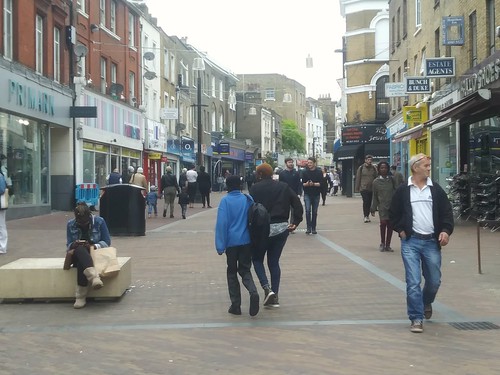 While it looks like it's been there forever, Mare Street has been pedestrianized for only a few years.  It's just a couple blocks, near the Hackney Central Overground Station.

Like 7th Stree SE in front of Eastern Market on the weekends, which has been pedestrianized (which continues to be a source of contention on the part of the food vendors inside the building). 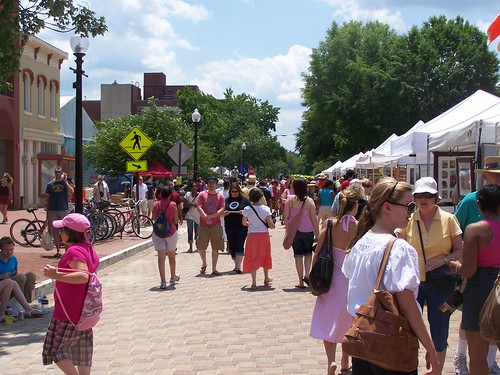 In the region, there are two longer pedestrian malls in Virginia.  Charlottesville, home to the University of Virginia, and thousands of students without cars, is the best known.  But Winchester also has one.  Like Third Street Promenade in Santa Monica, they tend to peter out at the ends. But the core of each pedestrian mall is reasonable active. 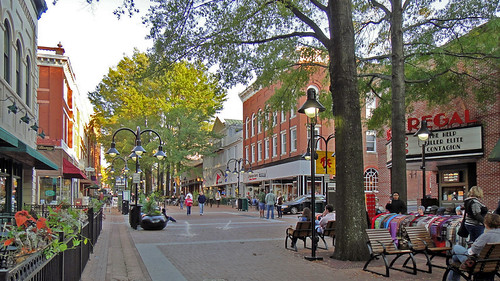 For this to work on 17th Street, there would need to be a traffic plan with access for deliveries, and a way to utilize what are now private parking structures part of apartment or office buildings adjacent to the district.

7. Execute the dedicated transitway for buses on 16th Street (in progress).  The 16th Street line is one of the busiest in the city, but it takes an hour to get from Silver Spring to Downtown.  Speeding up bus service by providing dedicated travel lanes during peak periods would make a big difference.

I don't know the exact breakdown of people throughput, but generally on streets with highly used bus lines, at least 40% of the total passenger volume moves on the buses, with something like 300-400 bus trips per day, contrasted to volumes of other motor vehicles greater than 20,000.  By prioritizing bus movement even more people can be attracted to the bus.

8. Create an integrated system of valet parking across the Dupont Circle commercial district. People could drop off a car at one station and pick it up at another. (This was offered for a time at the North Park Main Street in San Diego, which had an underutilized municipal parking garage.)

11. Create an enhanced network of intersections which prioritize pedestrian safety on 16th Street from P St. to U Street. Pedestrian scrambles aren't necessarily the option, but the idea is to repattern the behavior of motor vehicle operators.  High profile designs for pedestrian scrambles make it clear that pedestrian movement, rather than automobile traffic speeds, are the priority.

This is the intersection at Hollywood and Highland in Los Angeles ("L.A.’s New Diagonal Crosswalks Are Literally Saving Lives," Los Angeles Magazine). 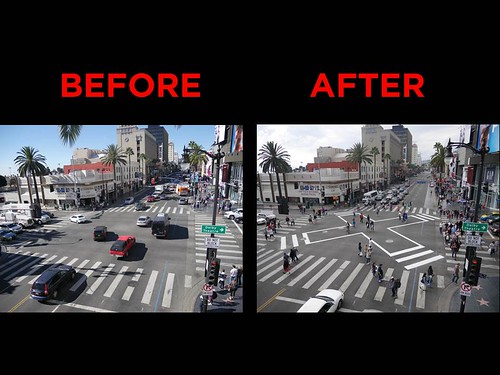 The primary point is to treat the intersections as a key element of the pedestrian network rather than individual disconnected elements.

Colorado Avenue in Santa Monica is another example to be referenced.  The street leads to Santa Monica Pier, is where the transit stations are located, and is perpendicular to the Downtown and the Third Street Promenade pedestrian mall.  The sidewalk and street have special design treatments.

This is the intersection at the entrypoint to Santa Monica Pier. 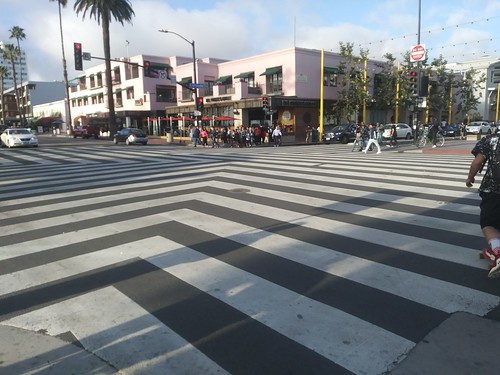 12. Similarly, along the lines of my belief that road pavements should be changed in cities to emphasize slower speeds, this section of 16th St. (as well as in Mt. Pleasant, say from Columbia Road to Park Road/Monroe Street), and especially 17th Street between P and R Streets could be paved in asphalt block as a visual, aural, and physical cue to drive more slowly.

Or a treatment like Exhibition Road in the Kensington district of London.  (This section ends as a small pedestrian district around the South Kensington London Underground Station.) 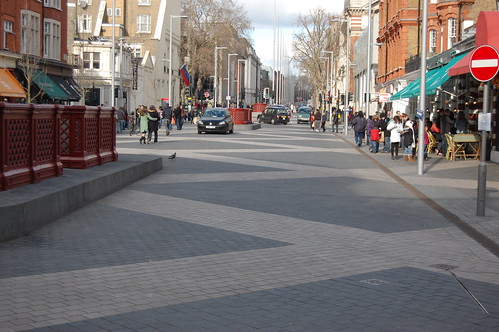 13.  Should there be a Circulator bus between Dupont Circle and U Street?  I know residents clamor for it.  But like the other routes, I don't think it would be highly used.  And without dedicated transitways, the buses are likely to be stuck in traffic.

While the idea of extending the current line seems straightforward, it would introduce significant delays to the servie by extending to the U Street corridor, which has tough traffic on weekends.  Better to have separate lines, if service between Dupont Circle and U Street would work. 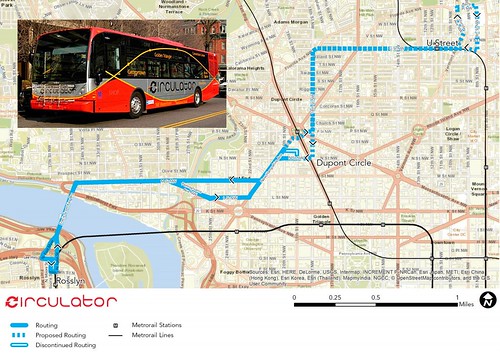