DC and "city repair" of the urban grid 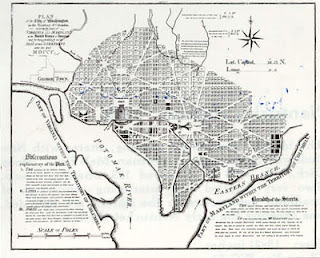 I have written a bunch of pieces about tunneling commuter arteries and decking over freeways and principal arterials that too often scar the city, split neighborhoods, and foul up the street grid developed by L'Enfant.

-- "Maglev as an opportunity for DC to underground through traffic on New York Avenue," (2020)

-- "Yes, public and nonprofit investments in the city spur further reinvestment and change: is this a bad thing or a complicated thing?" (2019) 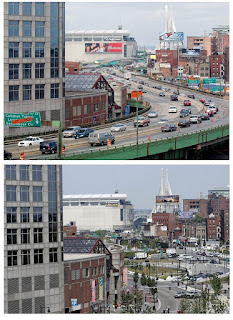 Boston: before and after the Big Dig.  AP photo.

A number of cities around the world have done this in various ways -- getting rid of freeways more generally (San Francisco's Embarcadero Freeway, Milwaukee, Boston's Big Dig, Seattle's Highway 99, albeit because of earthquake risk), along waterfronts (Portland, Oregon) or restoring rivers that had been covered up (Seoul) and/or tunnelizing major freeways (Marseille, Thessaloniki, Madrid) -- or have proposed doing so.

Note that this is expensive to do, but might be cheaper than the cost of rebuilding freeways at the end of their useful life.  Generally, it's "affordable" in central business districts with high property values, when "new land" created supports new high intensity development.

And I just mentioned Utrecht's now completed program to restore sections of the city's ring canal that had been converted to below grade roadways. 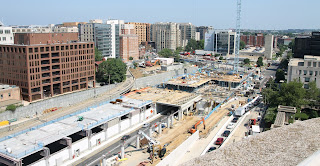 Building a deck over a couple blocks of the I-395 Freeway, between Massachusetts Avenue and D Streets NW.  Here the freeway was wide enough to allow for the construction of multiple large buildings, in an area of high value.

And DC has decked some sections of the I-395 Freeway, including the most recent "Capitol Crossing" project.

Foggy Bottom as an opportunity.  Greater Greater Washington reprinted an entry that discusses a 1997 proposal to do this in Foggy Bottom, which is cut up by arterial tunnels, a stub of I-66, and the Whitehurst Freeway.  Kennedy Center, the performing arts complex, is a kind of an island in the midst of roadways.

-- "What if Kennedy Center was [sic] part of Downtown DC?"

When I suggested that decking be employed with regard to the Southeast-Southwest Freeway, I was definitely remiss in not mentioning the similar opportunity in Foggy Bottom. (Although the FB article doesn't discuss the poor placement of Kennedy Center from the standpoint of what Jane Jacobs called "mixed primary use" and her example of the creation of a standalone arts district in the Oakland neighborhood in Pittsburgh, rather than downtown.) 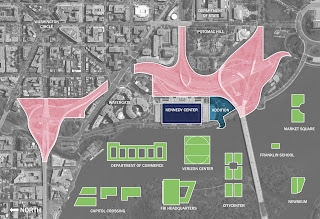 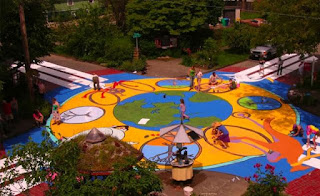 Portland's City Repair urban design advocacy group.  I use the term "city repair" in honor of the City Repair organization in Portland, Oregon.
A "repaired" intersection in Portland.
They focus on "repairing" city streets with the aim of supporting walking and biking, converting the streets from their hitherto overwhelming focus on motor vehicles.

Cities should create "Urban Design Opportunity Plans."  Most cities have plenty of opportunities for "city repair" and urban design advocacy agendas for such, applying the "Transformational Projects Action Planning" approach, should be developed, at the city-wide scale  more generally, and at the neighborhood scale, like the way I suggested for the Dupont Circle neighborhood in DC or Silver Spring, Maryland:

or what Alexandria, Virginia is doing around its waterfront, at the foot of King Street, or for more pedestrianized areas within cities like Las Ramblas in Barcelona or the plaza program in New York City.