PL #6: Creating a transportation development authority in Montgomery and Prince George's County to effectuate placemaking, retail development, and housing programs in association with the Purple Line

Using the proposed Purple Line light rail project in Montgomery and Prince George's Counties in Maryland, this is the last piece in the series of posts on the topic of leveraging new transit infrastructure simultaneously to improve and extend the metropolitan transit network while also pushing forward placemaking and public realm improvements. 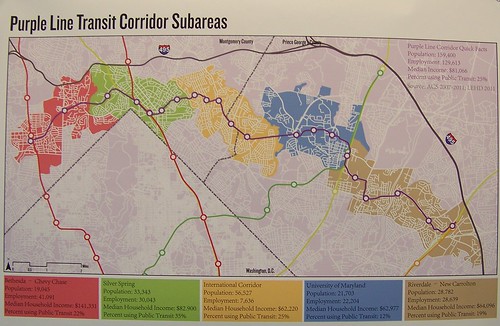 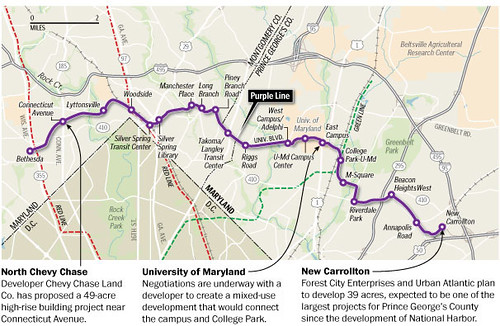 The placemaking ideas use my "Signature Streets" concept, along with other approaches, and were more fully illustrated in the sub-series of posts applying the various ideas to Silver Spring, first focused on making Fenton Street and Wayne Avenue "mobility corridors," but then extended to thinking about Silver Spring as a Sustainable Mobility and Innovation District.

For Montgomery and Prince George's Counties to bring about and implement the kinds of ideas outlined in the series, they need money.

And last year I wrote a piece suggesting the creation of "public improvement districts" as a standard practice in association with the creation of transit stations and station area plans ("Public improvement districts ought to be created as part of transit station development process: the east side of NoMA station as an example").  That's another approach, but one more suited to larger cities, where the development potential around a heavy rail station can be many billions of dollars.

At the time I recommended the development authority and TRD approach, I wrote a related piece ("Purple line planning in suburban Maryland as an opportunity to integrate place and people focused initiatives into delivery of new transit systems") wondering why they didn't "harvest" the learning from DC's Metrorail system in terms of how to better foster improvements more quickly, unlike the "trickle down" practice in DC, more like Arlington's Wilson Boulevard "project" and compared to other examples such as Rosslyn in Arlington, and the differential impact of stations in existing conurbations vs. greyfield or greenfield locations as well as endpoint stations.

What motivated me in 2014 wasn't so much the placemaking improvements, and I hadn't yet conceived of the various transit network improvements at that time.
Much of the talk at the conference concerned equitable development and warding off displacement.

Unlike Denver or Minneapolis, the examples touted at the conference--there isn't a lot of fallow capital for "affordable housing" for Suburban Maryland, and there isn't a large group of philanthropic organizations ready to fund it either.

Note that the Purple Line conference in 2014 didn't reference the Phoenix Light Rail program.  It's a textbook example of lining up money in advance of the light rail's opening to fund affordable housing ("Light rail housing fund spurs 15 projects in metro Phoenix" and "Why you don't see more vacant lots along light-rail route," Arizona Republic).

The Phoenix affordable housing development program is an important advance in linking transportation infrastructure with equity considerations, as well as tighter integration between land use intensity and development and transit infrastructure.  Even so, it's not a lot of money, and wouldn't even be able to fund a single project in Suburban Maryland.

In addition to the affordable housing, mixed use development, and station area improvements I thought about originally, now I would add to the list of eligible funding an expanded set of projects as outlined in the current article series.

1. The idea is to create a companion "Revitalization District" that wraps around the newly created transportation infrastructure, and create a "Tax Increment Financing" program to raise a very large fund, which could increase significantly the velocity of revitalization, and to purposefully fund the kinds of equitable development activities espoused by the Purple Line Corridor Coalition.

2. Rather than creating a variety of micro-TIF districts for various projects, this proposal is for a large single fund, but with a detailed program facilitating projects at various scales and locations, but using the large tax district as a way to realize projects across all parts of the catchment area, including areas where current demographics and economic conditions wouldn't normally support financing for such projects.

3. Originally I did not foresee using TRD monies to fund the construction of transit infrastructure per se, but to fund new property development by both for profit and nonprofit entities, property acquisition to maintain long term affordability, civic infrastructure, and community improvement programs of various types.

Now I would include transit network improvements as eligible for funding, and would even consider using a portion of the revenue stream to fund the actual construction of the Purple Line specifically.

4. The lessons from DC and Portland's use of an Urban Renewal District to fund most of the local match for the Yellow Line light rail is that it takes 30-40 years to see fully the investment, so the TRD needs to be set up to last a long time--typically an urban renewal district's funding is for a 20 year period and then ceases, although Portland has a process for extending the period.

5. Recognizing that new development results in new costs for existing systems like emergency services and schools, "all" of the forecasted increase in property taxes should not go to the TRD, some of the stream should be reserved and fund such services.

Our NZ e-correspondent Nigel calls our attention this article from The Hill on what the author calls "urban renewal abuse" over this very issue. Rather than focus on the various tranches and needs, the author paints all public funding of renewal as tainted, which is a simplistic take.

By contrast, see the example of Allentown, Pennsylvania discussed in the past blog entry, "State-level initiatives to support center city revitalization in smaller towns." In the Allentown initiative, the State of Pennsylvania allows the city to capture projected state personal income tax revenue increases as part of the TIF district.

6.  Action plans would need to be created, along with the right accountability mechanisms and marketing systems, along with some flexibility to respond to changes in market conditions, circumstances, and opportunities as they development.  A supra-prescriptive plan isn't the right course, but a set of "transformative projects" should be part of the program (see "(Big Hairy) Projects Action Plan(s) as an element of Comprehensive/Master Plans"--now I am calling such plans, "Transformational Projects Action Plans").

This is an example of how such an organization could buy housing complexes with the aim of making them permanently affordable.

"Marc Elrich pitches new tax districts in Montgomery County. Those could be the key to funding big transit projects"

Another example of creating permanently affordable housing with an existing housing complex.