How far has Brand America fallen? The US as a failed state | Las Vegas gets big coronavirus test donation from the United Arab Emirates 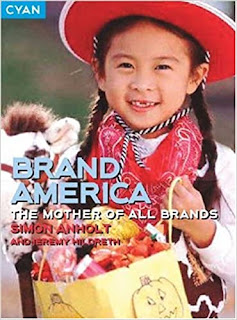 I few months back I joked with a co-author of the book Brand America, that the new Brand America under President Trump is "Can't Do. Won't Do. You Do. F*** You."

I see that Nevada is boosting its covid19 testing capacity because of a donation of 200,000 testing kits from the United Arab Emirates ("Las Vegas needed help testing for coronavirus. Then a crown prince stepped in," Los Angeles Times; "After the end of the world: the eerie silence of the Las Vegas Strip," Guardian; "Effects of coronavirus fear hit Las Vegas economy hard," Las Vegas Review-Journal). From the article:


One of the largest mass coronavirus testing sites in Nevada has opened in Las Vegas, a move that puts the city one step closer to reopening its economy. And it might not have been possible without the donation of more than 200,000 test kits, worth as much as $20 million, from the United Arab Emirates.

Within weeks of the coronavirus reaching Las Vegas, members of the public were clamoring to be tested, and hospitals and laboratories were running out of supplies. Nasal swabs were so difficult to come by that some clinics closed, and state officials called on the federal government for help. 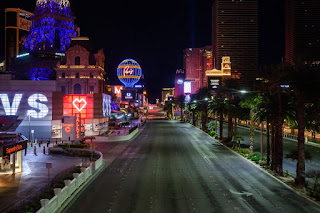 AP photo of an empty Las Vegas Strip in March 2020

But the intervention that changed the state’s fortunes was a large donation from Mohammed bin Zayed al Nahyan, the crown prince of Abu Dhabi and de facto ruler of the United Arab Emirates, according to members of Nevada’s COVID-19 Response, Relief and Recovery Task Force, a group of business leaders supporting the state’s recovery.

Jim Murren, the former chief executive of MGM, who chairs the task force, said this week that the gift was the result of discussions with G42, an Emirati artificial intelligence and cloud-computing company. Although talks initially centered on how to bring back concerts and sports events to Las Vegas during the epidemic, Murren said his counterparts in the United Arab Emirates quickly realized Nevada didn’t have enough test supplies to help stem the spread of the disease. 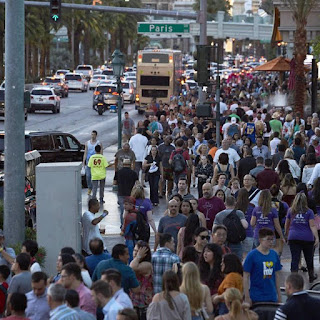 At the time, the state could only manage to test hundreds, not thousands, of people daily. Those who did get tested endured lengthy wait times for results as their samples were shipped out of state to private labs in California or Arizona that could take as long as two weeks to deliver an answer. By the time state health officials learned someone had tested positive, it was too late to prevent them from spreading the virus. ...

Nevada has received money and supplies from the Federal Emergency Management Agency but nothing that approaches the scale or the speed of the United Arab Emirates’ donation. [emphasis added] According to state health officials, FEMA has equipped Nevada with 26,000 testing swabs and 25,600 testing transport components. More supplies are on the way, officials said, but the shipments haven’t arrived.

For Murren and others on the task force, the United Arab Emirates’ gift is a sign of the relationships Vegas business leaders have cultivated overseas. But public health experts, who praised the donation, said it was also an indictment of the U.S. government’s halting response. [emphasis added]

It made me think of "the song" "The Americans" from 1973. I didn't realize originally it was an on air editorial by newscaster Gordon Sinclair from CFRB radio in Toronto.

Instead, I was familiar with the "spoken word" 45 record version by Byron MacGregor, a newscaster at CKLW-AM radio. Back then, "CK" a high-power radio station based in Windsor, Ontario, focused on serving the American market for listeners and advertisers. It was definitely the #1 station in "Detroit."

The record focused on how much the US helps others and gets derided in response.

Obviously, that's the attitude that President Trump has, which has led to his America First agenda.

Still, it's incredibly damning that the federal government's failure to take the lead in coronavirus testing is so severe that some states are turning to foreign countries for help.

Maybe Gordon Sinclair would think it's an example of the US finally getting back the kind of help it has given to so many others.

Instead I see it as an example of the USA as a "failed state" ("We Are Living in a Failed State," The Atlantic)."  From the LAT:


The Emirati donation “is reflective of the failure of the federal government to step up to its responsibility to make sure that in a time of scarcity every community gets the resources they need to respond to this pandemic,” said Jeffrey Levi, a professor of health policy at George Washington University.

One of the points made in "The Americans" is that at that time only the US made airplanes capable of long distance flights. These days, we have the Boeing 737MAX debacle that includes not just the airplane manufacturer but the failed oversight from its regulator, the Federal Aviation Administration.

Another was that the US aid and expertise rebuilt foreign railways in India, France, and Germany. Now, the passenger railroad system in the US is the worst of any major developed nation.

Of course, the UAE isn't a fully benevolent actor either. According to the LAT:


In addition to offering humanitarian relief, the United Arab Emirates has a financial interest in seeing Vegas come back to life. Dubai World, the state-controlled investment vehicle of Dubai, owns half of the sprawling CityCenter complex, which when it opened in 2009 on the Strip was the largest and most expensive private development in the city.

You get what you pay for.  WRT Las Vegas, too it's somewhat ironic. Las Vegas casino operator Sheldon Adelson is a strong investor in President Trump and the Republican Party for support of reduced taxes and an ultraconservative approach to Israel and the Mideast.

The tax cuts favoring the wealthy put hundreds of millions of dollars in Adelson's pocket, which was a pretty good return on his investment in Republican election campaigns, which he continued in both the 2018 and 2020 election cycles ("Sheldon Adelson to donate $100m to Trump and Republicans," Guardian).

Now the financial losses in Las Vegas at the Sands, owned by Adelson, and other casinos because of federal government failures to respond properly to the pandemic has cost all of that and more ("Las Vegas Sands Posts Loss Amid Coronavirus Shutdown," Wall Street Journal). From the article:


Casino operator Las Vegas Sands Corp. reported a 51% drop in revenue, with Las Vegas shut down in response to the coronavirus pandemic and reopened casinos in Macau struggling to recover.

On Wednesday, Sands posted $1.78 billion in net revenue for the three months ended March 31, down from $3.6 billion at year earlier. The company had a net loss of $51 million for the quarter, compared with $744 million in net income a year earlier.