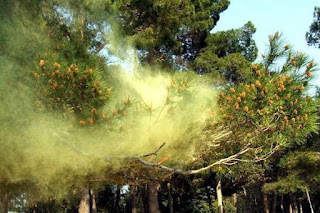 I don't have a problem, fortunately, with tree pollen in the Spring, but many people do.  According to the Guardian ("How urban planners' preference for male trees has made your hay fever worse"), this problem has been accentuated by the plantings of certain types of trees over others.

Sadly, some of my favorite trees, such as oaks and maples, are high in pollen.


Eight years ago Tom Ogren, a horticulturist, was in Sacramento, California, when he noticed that the ground around the State Capitol building was covered in thick yellow pollen.

Scanning the trees along the street with his binoculars, he saw the trees were all deodar cedars (Cedrus deodara) and all cultivated males.

Naturally, the deodar is monoecious, having both male and female cones growing on the same tree. But cultivation has produced wholly male trees – plants favoured by planners since they have no seeds or pods to drop but only pollen. This was the case at this Sacramento site, Ogren said.

Growers’ breeding of purely male diodar trees had created, said Ogren, “something that doesn’t even exist in nature”. ...

Male trees are often favoured by urban landscape planners as female trees can shed fruit as well as seeds and pods.

Pollen producing trees that are dioecious (with male and female flowers on separate plants) are seen to add to the effect of allergies of city dwellers. ...

Allergenic tree pollen was found to be one of the biggest contributors to hay fever and asthma, and pollen counts have also been rising over the past 15 years.

This health issue is going largely unaddressed despite there being a simple solution: a bigger mix of male and female trees in urban areas.

Ogren has created the Ogren Plant Allergy Scale (OPALS) to guide the development of a tree canopy where pollen production is managed in a manner to be reduced.