Remember this, every Governor who has sky high approval on their handling of the Coronavirus, and I am happy for them all, could in no way have gotten those numbers, or had that success, without me and the Federal Governments help. From Ventilators to Testing, we made it happen!
— Donald J. Trump (@realDonaldTrump) May 12, 2020 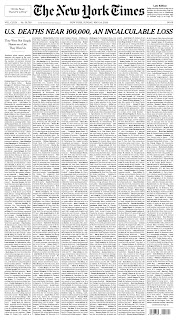 Today's Front Page of the New York Times is the start of an article consisting of 1,000 names of people who've died from the coronavirus.

Reminded me of my reaction to an op-ed ("The seeds of the H Street ‘miracle’") in the Washington Post, where the DC chapter of LISC made out that the revitalization of H Street NE was in large part the result of the efforts of the H Street Community Development Corporation, a LISC affiliate.

-- "The community development approach and the revitalization of DC's H Street corridor: congruent or oppositional approaches?," 2013 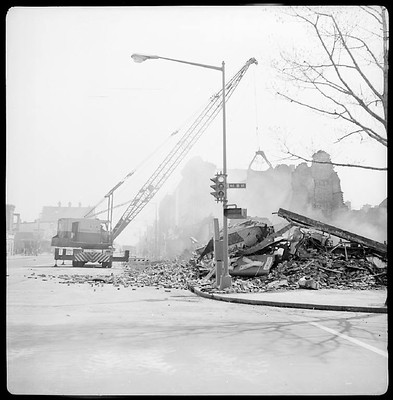 The commercial district languished for two decades while "being revitalization" (and almost 40 years since the 1968 riots), because the organizing principle of the H Street CDC was that the only value in the neighborhood was the opportunity to assemble and redevelop land that was close to Downtown and Capitol Hill.

HSCDC didn't see value in urbanism, urban design, and the historic qualities of the neighborhood.

Most of the urban renewal projects they and the city undertook had a distinct suburban character which seriously diminished the ability of the area to revive on city appropriate terms.

Eventually, the market righted itself despite the CDC, and it was supplanted by for profit actors. 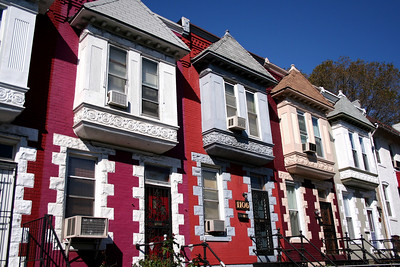 Photo of rowhouses on the 1100 block of 8th Street NE by Elise Bernard.

(I joke that my involvement in urban revitalization was a form of "blowback" against the H Street CDC.  I was spurred to figure out why, despite upwards of $150 million in projects and new development and proximity to Union Station, Downtown, and the US Capitol and Capitol Hill, the neighborhood still languished.)

Similarly, the Federal Government's response to coronavirus has been a disaster.

The only thing that has separated the US from the UK in its similarly disastrous response--if the US had the rate of death of the UK, instead of about 100,000 deaths at this point, we'd have about 185,000--is the ability of states to act independently of the federal government.

By contrast, local and regional authorities in "England" lack this capability (Scotland, Wales, and Northern Island have devolved powers and do act independently on many dimensions). 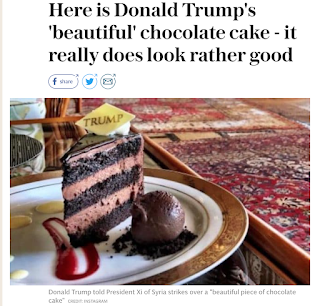 So Trump taking credit for the independent action of states really takes the cake.

Of course, this is like the Republican Party taking credit for the end of slavery--this happened 155 years ago--in an attempt to whitewash all the negative things it does today, such as voter suppression targeting the African-American community ("America’s Relentless Suppression of Black Voters," The New Republic).

Vice President @JoeBiden ‘s latest quote is both pathetic & hurtful. Challenging millions on their blackness is condescending. The GOP was started to oppose slavery. I have the right to think and vote for myself along with all other Americans, including black Americans. pic.twitter.com/RRURX1eMbY
— John James (@JohnJamesMI) May 22, 2020

Although yes, Joe Biden ("Joe Biden's 'white kids' gaffe, and why his slip-ups matter," Washington Post) is hardly the best possible herald the Democratic Party can put up against Donald Trump, in general, or for African Americans ("Black Americans are in an abusive relationship with the Democratic party," Guardian).

That being said, Biden and Trump are in no way equivalent. It does matter who gets elected, as the families of the 100,000 dead from the coronavirus can attest. 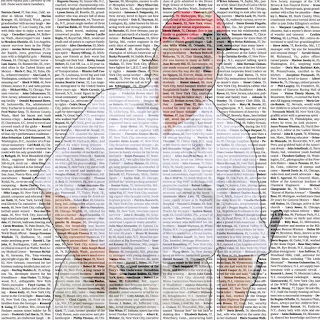 I can see many of the same mistakes in Columbia Heights as well.

The linked write up is one of your better pieces.

2. What's up with Columbia Heights? Is Nadeau really that bad?

3. I just finished a piece for tomorrow revisiting past recommendations for two councilmembers per ward or more wards.

I think having two representatives per ward would be a big improvement. It wouldn't allow for as much ward political control, monopoly, and intellectual malaise.

4. This is politically incorrect. I mentioned in comments that I was trying to write some pieces with a guy in Baltimore. He's a retired planner. But he is so down on the political leadership within the city, he sees no real path forward.

It got me thinking that DC's advantage is that because the city has mixed demographics, its political leadership has been mixed as well, but only in the last 20 years. Before people bowed to Barry.

If Barry became the equivalent of DC's Trump, eventually he was countered. The city couldn't function any more being run that way.

Although it will be a long time still before DC can have a white mayor.

5. will read the cite. Thank you. I need to do an update on micromobility and car sharing and the sustainable mobility platform.

Some argue micromobility is crippled. Others not.

I don't think it is. I just don't think it won't work with unfettered competition. So you either create legal monopolies and contract it out, or run it as part of a local jurisdictional service like Capital Bikeshare.

The same could even be true of carshare.

Most cities (in the US) don't have the right conditions to make it work. The few that do should enable it.

Not to be annoying, but check your email when you get a sec. They finally built on that empty lot on the 800 block of 10th st ne you were talking about.

And a bonus shot of what they did corner of 7th/h. i can send more if you like. both came out quite nice imo. the 7th/h is interesting bc instead of the typical setback from the historical facade they built straight up (which makes sense, i don't think the lots are too dense)

Thank you for thinking of me. (And letting me know to look for an email, because I get so many, I miss a bunch, unintentionally.)

I mean, I'm glad it's not an empty lot and it's way better to have a house there.

It's not terrible but I think it should have had historically complementary "hoods" over the windows and an Italianate or at least a decent cornice.

And "where's the porch?" is a failure too.

The cornices on the "new" (maybe 17 years old?) construction buildings across from the old Capitol Hill Hospital on 7th St. NE aren't great (not enough dentils) but way better than the lack of one.

And wrt integration of older buildings and new construction, the houses at something like 500, 502, 504 (not sure on the numbers but the first three buildings) of East Capitol NE are infill construction from the early 2000s. (Ironically, constructed on historic buildings torn down by the church. The church's action ended up leading to the creation of the local historic preservation ordinance.)

They are great buildings. Clearly were expensive when built and way more expensive now. But the design means they will continue to appreciate in value and price.

Then again, the integrity of the ensemble on that block was diminished by the new construction brick rowhouses by the CDC which are too small compared to the extent buildings.

That's why I argue for design review. Not to restrict, to make things that much harder, but to ensure better design, which adds to value long term and strengthens the value of the ensemble of the block and blocks.

charlie -- oh, now I get it. DCCH vis a vis my piece on H St. CDC. I thought you were referring to the Councilmember...

Yes. It's the whole CDC thing.

Quick project, vs. enduring value. The problem is that even a "temporary" project that can be replaced will last for 30 or 40 years at a minimum usually.

The only good thing is that their projects (and on H St. technically the parking fronted shopping center anchored by Rite Aid was done by DCHD not the CDC, while there was a very similar center on 14th St., the Nehemiah) "warehoused" land which as the market changed, could be redeveloped bigger and better.

When I bid with someone on a market study for CH (during a recession under Gray, so the city rescinded all the grants), in the proposal I made the point that the plans for CH never were never multiphase, they didn't plan beyond the initial projects.

But that DCUSA needed to have housing above, that other sites that could be redeveloped (like the health center) or built bigger (like the CVS) should be, and that the retail opportunities needed to be better managed (for Tivoli and the building across the street both as well as 11th St., even Park Road), etc. And that they needed to figure out women stuff (apparel, stores like Ulta) to attract a wider range of customers.