Not that I want to defend management failure and unnecessary death, but that was an outcome determined by a corrupt system 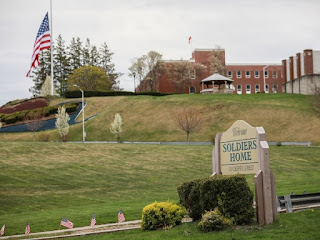 On Friday, former leaders of the Holyoke Soldiers' Home in Massachusetts were charged with criminal abuse and neglect, over the coronavirus-related deaths of 76 people ("Two Charged in Coronavirus Outbreak at Veterans’ Home That Left 76 Dead," New York Times).

But the fact that the Superintendent: (1) was a political appointee, (2) unqualified, (3) made bad decisions (4) especially in times of extreme circumstances, (5) amid inadequate resources, especially staff, contributed to and produced the "failures."

It’s also the story of how political connections pave the way for employment, even for the difficult and specialized job of running a facility that promises veterans “care with honor and dignity.” According to the report prepared by former federal prosecutor Mark W. Pearlstein, Walsh, a decorated Marine Corps veteran with no experience in health care or long-term care, was encouraged by a state lawmaker to apply for the superintendent’s job.

... During the June 24 press conference, Baker also said, “The first time I ever met him [Walsh], or talked to him was when we swore him in.” But according to Walsh’s attorney, William Bennett, on April 27, 2016, Walsh was interviewed, separately, for 20 to 30 minutes each, by Baker, Lieutenant Governor Karyn Polito, and then-Baker chief of staff Steve Kadish.

This is likely doubly true of "veterans" nursing homes run by states.

The "system" produced the conditions that led to these deaths.

But there aren't criminal charges in store for the people who created those conditions.

Four years ago, in the run up to the local elections, I was talking with my neighbor about voting and she said that she made her choice on whether or not the person was qualified to be mayor. I said why, "they're running for council."
She made the point that the more capable and qualified the candidate the better we would be served. She's right of course.
Putting people into positions when they are barely or un- qualified is catastrophic when circumstances require extraordinary response. (This by the way is why the line "never let a crisis go to waste" is mostly a story of unrealized opportunities. Most people aren't capable of rising to the occasion.)
Corrupt systems.  I don't like to bandy about the word "corruption" when it comes to government.  Corruption has a specific meaning and the word is too often misused when people excoriate politics and politicians.
But there is no question that putting "politics" over "governance" and quality outcomes has subverted and degraded what government does and can do, in ways that dis-serve the public. 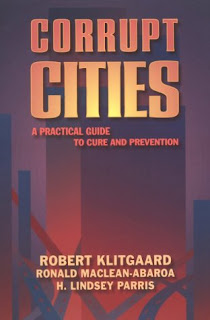 Years ago, blogreader EE shared with us a book published by the World Bank, Corrupt Cities: A Practical Guide to Cure and Prevention and I wrote about it in this 2011 piece, "DC ethics legislation misses the point: focus on what produces corruption as a regular outcome, not monitoring."
While the book focuses on "developing nations," the reality is that corruption in government works the same way everywhere it occurs.
As the authors write:
Corruption = monopoly + discretion of public officials - accountability.
My piece listed 9 particular issues (although there are more) with the way things work in DC.
Even though legislation was passed to reduce conflicts, most of the areas I identified as rife with the potential for conflict weren't addressed.
IACA is the International Anti-Corruption Academy, which was formerly known as the International Association of Crime Analysts, and they provide technical assistance and training world-wide.. This particular issue of their alumni magazine  focuses on local government and features an interview with one of the authors of the book Corrupt Cities and his work as the Mayor of La Paz, Bolivia.
One quote:
"The problem is not corrupt individuals.  It's corrupt systems."
"Islands of Integrity and Effectiveness," discusses the five point system to limit corruption that was derived from the work that led to the book:
I realize that the kinds of recommendations I've made over the years wrt DC governance and politics in various entries absolutely reflect those points, especially the first three, but also the last two.

The Boston Globe just editorialized about this, that there has been no reckoning for Gov. Baker and the nepotistic system that resulted in the appointment of a super unqualified person (who was related to many local elected officials).

Others took the fall, but the problem goes on.

... this is an illustration of multiple leadership failures in American society. When you appoint unqualified people, if circumstances change and become problematic, the people are incapable of responding with competence.