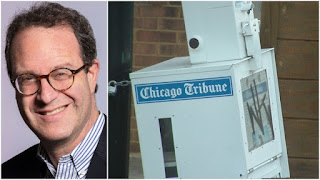 Blair Kamin received the 1999 Pulitzer Prize for Criticism and the webpage includes a number of his articles including a 1998 series on public space issues concerning the Chicago waterfront.

Whether or not you agreed with what I wrote was never the point. My aim was to open your eyes to, and raise your expectations for, the inescapable art of architecture, which does more than any other art to shape how we live.

So I treated buildings not simply as architectural objects or technological marvels, but also as vessels of human possibility. Above all, my role was to serve as a watchdog, unafraid to bark — and, if necessary, bite — when developers and architects schemed to wreak havoc on the cityscape.

This was a conversation between you and me, the critic and the readers, and I was often inspired by how you responded.

Some of you engaged me to talk architecture at spots ranging from the Art Institute to the Belmont Avenue “L” station to O’Hare’s security gates. Many of you wrote letters and emails to express how much you appreciate that the Tribune remains one of the few American newspapers that still covers architecture on a regular basis.

About 20 years ago, when I first started getting involved earnestly in local civic affairs, in particular urban revitalization, newspapers weren't quite the basket case they are now although it was on the horizon, and many newspapers had architecture and/or urban design critics writing weekly or more frequently, along with business beat writers covering development and real estate, art critics writing about museums and culture, and too rarely, good writers on the transportation beat. 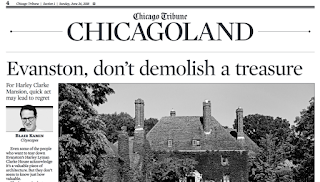 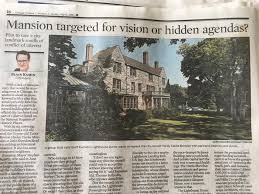 I owe a debt to those many writers, including Robert Campbell at the Boston Globe, Blair Kamin at the Chicago Tribune, Whitney Gould at the Milwaukee Journal Sentinel (deceased), Christopher Hume at the Toronto Star, John King at the San Francisco Chronicle and Inga Saffron at the Philadelphia Inquirer, Edwin Heathcote at the Financial Times , Ed Gunts at the Baltimore Sun, (I wasn't enamored of Benjamin Forgey at the Washington Post), Christopher Hawthorne (now working for the City of Los Angeles) and Christopher Knight at the Los Angeles Times, Steve Litt of the Cleveland Plain Dealer, various writers at the Toronto Globe and Mail, Ada Louise Huxtable (deceased) and Michael Lewis at the Wall Street Journal, and others, for helping to educate me about architecture, urban design, cities, and culture.

Similarly, even though it was many years before I put my toe in the water and got involved, in the late 1980s and into the early 1990s, I read the urban design columns by Mark Jenkins in the Washington City Paper.  It helped prepare me for later.

On the architecture and urban design side, Campbell, King, Lewis, Litt and Saffron are still writing.

Most of them are not, and when they retired in most cases, they weren't replaced.

This is a great loss for communities, because these writers and coverage of architecture and urban design helps to raise the bar for quality, and attention to how real estate development works, and provides people with a vocabulary they can use when interacting with elected and appointed officials and their fellow citizens.

The Post's Philip Kennicott writes about architecture and the arts--this is the most recent, "Trump decreed that we should worship classical architecture. Then his supporters defiled the Capitol," but not multiple times per week the way that Blair Kamin did or John King, Steven Litt, and Inga Saffron do.